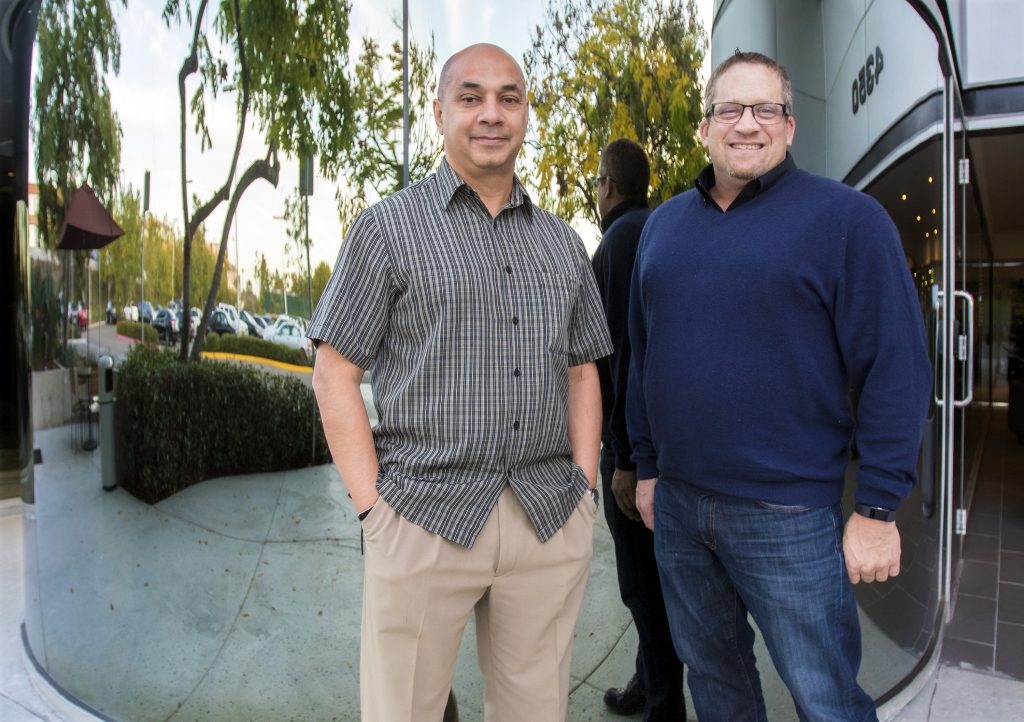 San Diego tech company Netradyne is on the cusp of launching a sophisticated technology system that will either act as friend or foe to the 6 million people who operate commercial vehicles in the U.S.

The one-year-old firm has invented a small device that’s designed to be mounted behind the rear-view mirror of a pickup truck, tractor-trailer, van or other commercial vehicle. It essentially acts as a computerized command center, perpetually capturing 360-degree video of the car’s surroundings, automatically identifying everything on the road from other cars and pedestrians to red lights.

The device also uses custom-built artificial intelligence to determine unsafe actions (tailgating, speeding relative to other cars, accidents, etc.) on the road and alert managers in near real-time for urgent events.

“It’s all with the purpose of trying to apply AI to revolutionize safety for commercial fleets,” said Sandeep Pandya, president of Netradyne.

This so-called “Driveri” device relies on a Nivdia mobile processor for computing tasks and a Qualcomm chip — the same one used in Apple’s iPhone 5 — for cellular needs, say transmitting footage over 4G.

The device, which can store five driving days’ worth of video at one time, works in conjunction with a cloud-based management center, where footage can be saved longer term and fleet managers can see alerts, dive into driver analytics and keep tabs on an individual’s daily performance, which is scored at all times by a complex grading and ranking system modeled around three-digit credit scores.

Though the end game is to the keep each fleet’s personnel, plus the broader public, safe, the implications are far grander. The system will surely affect how insurance companies determine fault for accidents and other incidents, thus protecting or exposing a driver, and his or her company, in all manner of incidents.

Netradyne insists it has drivers’ best interests in mind.

“The set of incentives associated with good driving are worth having some technology that basically back the driver up,” Pandya said. “A lot of the time, drivers are victimized.”

Currently in testing with a dozen local and national clients, including Stanley Steemer, Netradyne’s system is slated for commercial availability in January. Exact pricing varies, but the startup said it’s using a subscription model that will likely cost customers $1 to $2 per day, per vehicle. To date, the startup, which has offices in both San Diego and India, has financed operations through a combination of bootstrapping and venture capital. In June, Netradyne secured $16 million in its first funding round.

The company aims to be an intelligent leap forward in the realm of telematics, a field that blends communication and vehicle technologies, and encompasses things like navigation systems or the car-sharing systems that power Car2Go. In total, the worldwide commercial vehicle telematics market is projected to more than double over a five-year period, growing from a $20 billion industry in 2015 to a $48 billion market by 2020, according to market research firm MarketsAndMarkets.

Netradyne competes with a number of existing fleet management systems from companies such as Omnitracs, previously a subsidiary of Qualcomm, and Fleetmatics, which is owned by Verizon. The startup believes its AI capabilities set its platform apart from those offered by rivals.

“A lot of the legacy providers, what they do is wait until the vehicle stops suddenly. Then, they turn on the camera and record what’s happening around the vehicle,” said Adam Kahn, Netradyne’s vice president of fleet business who previously worked at Omnitracs.

“Someone, somewhere else, maybe a day later, will study that video and try to determine what happened,” Pandya added.

Meanwhile, Netradyne’s device, Kahn said, can manage a trillion calculations per second, which allows for complex, math-driven interactions with objects on the road. It’s this kind of always-on, computer-vision-based awareness that provides a type of granularity that Netradyne believes doesn’t exist elsewhere in the market.

Of course, professional drivers might be unsettled by the Driveri system — and reasonably so. Netradyne’s technology is capable of tracking and recording pretty much all behaviors in and around vehicles, meaning drivers are essentially being micromanaged by algorithms at all times. Have a bad hour or two of driving and Netradyne will tell your manager.

The company counters that the commercial fleet industry is collectively and swiftly moving toward video technologies, so spy-level monitoring is merely a given. Plus, Netradyne’s system is designed to not just penalize poor performance but reward good behaviors, too. In fact, companies piloting the system have already structured bonus systems around the Netradyne score, Pandya said.

“Most systems out there, if not all the systems, will focus on the things you’ve done wrong. You were speeding. You ran a red light. You got in a crash. With the utilization of artificial intelligence, we can watch every minute of every driving day,” Kahn said.