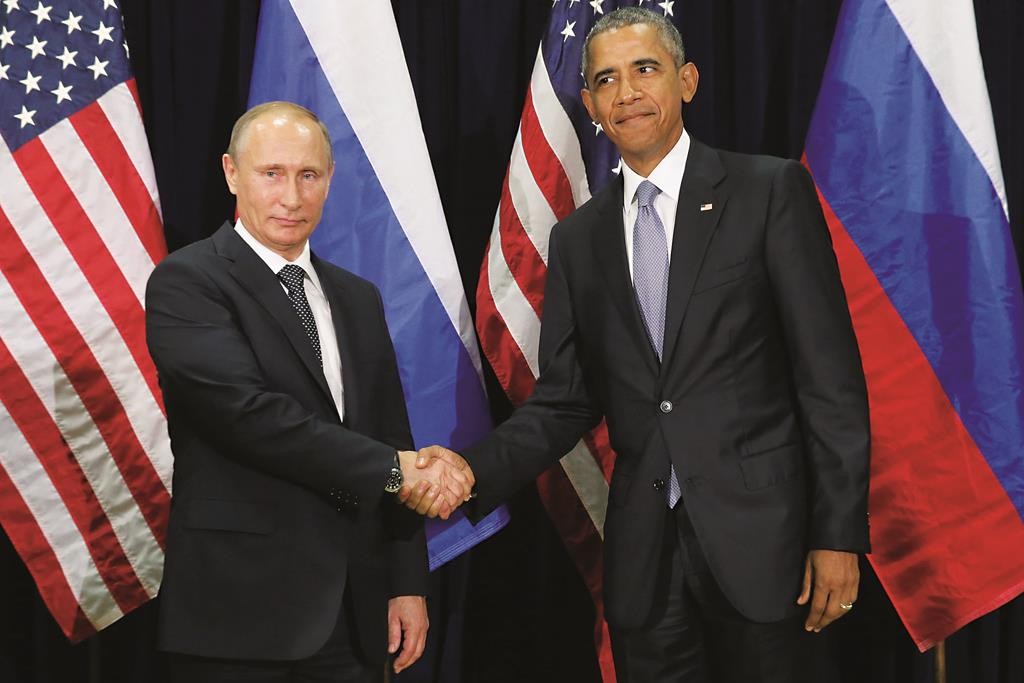 President Barack Obama is promising that the U.S. will retaliate against Russia for its suspected meddling in America’s election process, an accusation the Kremlin has vehemently denied.

Amid calls on both sides of the political aisle on Capitol Hill for a full-bore congressional investigation, including assertions that President Vladimir Putin was personally involved, Obama said in an interview that anytime a foreign government tries to interfere in U.S. elections, the nation must take action — “and we will.”

“Some of it may be explicit and publicized, some of it may not be,” he told NPR News Thursday. “But Mr. Putin is well aware of my feelings about this, because I spoke to him directly about it.”

No proof was offered for any of the accusations, the latest to unsettle America’s uneasy transition from eight years under Obama to a new Republican administration led by Trump. The claims of Russian meddling in the election also have heightened already debilitating tensions between Washington and Moscow over Syria, Ukraine and a host of other disagreements.

Obama’s deputy national security adviser, Ben Rhodes, connected the dots further, saying it was Putin who was responsible for the Russian government’s actions.

“I don’t think things happen in the Russian government of this consequence without Vladimir Putin knowing about it,” he told MSNBC.

The explosive accusation paints Putin, the leader of perhaps America’s greatest geopolitical foe, as having directly undermined U.S. democracy. U.S. officials have not contended, however, that Trump would have been defeated by Clinton on Nov. 8 if not for Russia’s assistance. Nor has there has been any indication of tampering with the vote-counting.

The Kremlin rejected the claim of Putin’s involvement, with Putin spokesman Dmitry Peskov dismissing it as “laughable nonsense.”

There has been no specific, persuasive evidence shared publicly about the extent of Putin’s role or knowledge of the hackings. That lack of proof undercuts Democrats’ strategy to portray Putin’s involvement as irrefutable evidence of a directed Russian government plot to undermine America’s democratic system.

The dispute over Russia’s role is fueling an increasingly public spat between Obama’s White House and Trump’s team that is threatening to spoil the delicate truce that Obama and Trump have forged since Election Day to smooth the billionaire businessman’s move to the White House in little over a month.

Although the president and president-elect have mostly avoided criticizing each other publicly since Trump’s win, their aides have been more openly antagonistic. Obama, however, did take a direct swipe at Trump in an interview earlier this week, noting that Trump at one point in the campaign had publicly encouraged Moscow to find and release information on Clinton.

Kellyanne Conway, Trump’s senior transition adviser, said it was “breathtaking” and irresponsible that the White House had suggested Trump knew Russia was interfering to help his campaign.

That led Earnest to unload from the White House, arguing that Trump, who has dismissed the CIA’s assessment of Russian interference, should spend less time attacking the intelligence community and more time supporting the investigation that Obama has ordered. Earnest said it was “obvious” Trump knew what Russia was doing during the campaign, pointing out that Trump had encouraged Moscow during a news conference to find Clinton’s missing emails.

Trump has said he was joking.

“I don’t think anybody at the White House thinks it’s funny that an adversary of the United States engaged in malicious cyberactivity to destabilize our democracy,” Earnest said. “That’s not a joke.”

U.S. intelligence officials have linked the hacking to Russia’s intelligence agency and its military intelligence division. Moscow has denied all accusations that it orchestrated the hacking of email accounts of Democratic Party officials and Clinton’s campaign chief, John Podesta, and then leaked them to the anti-secrecy website WikiLeaks.

Trump and his supporters insist the Democrats’ outrage about Russia is really an attempt to undermine the validity of his election victory.

Still, Democrats pounced on the latest suggestions of Putin being connected to the daily drip of emails during the presidential race from some of Clinton’s closest advisers.

“Having been the former head of the KGB, does that surprise you?” Reid said. “And does it surprise anybody today when he denied it?”