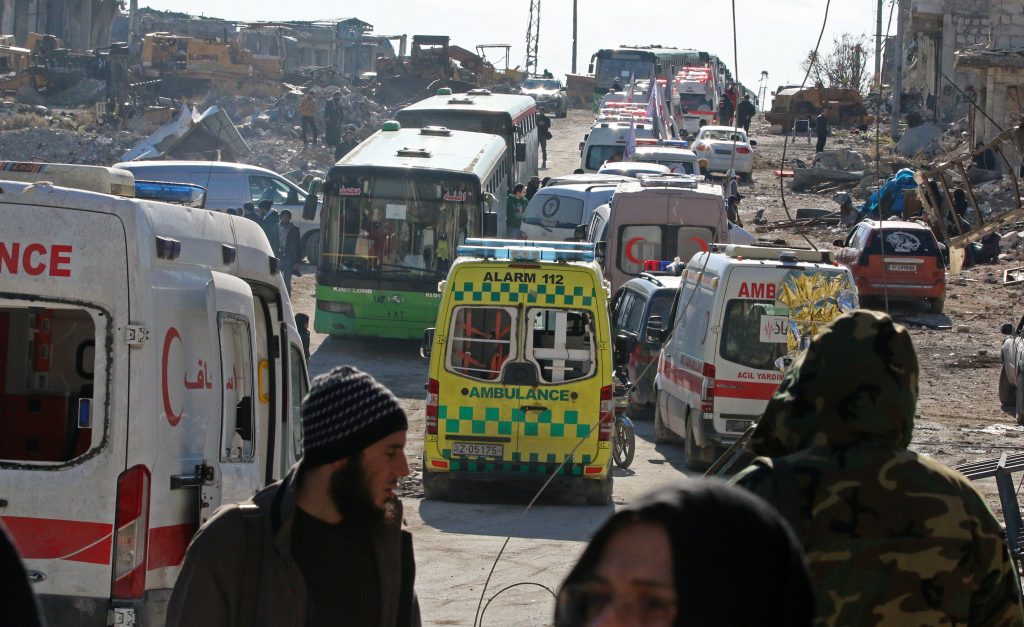 Residents in eastern Aleppo started to board buses and ambulances as the long-awaited pullout from the last rebel enclave in the embattled Syrian city got under way on Thursday.

The evacuation is part of a ceasefire deal reached this week to have the opposition surrender their last foothold in Aleppo to Syrian government control in the face of a devastating ground and air offensive by government forces in the past weeks that chipped away at the rebel enclave. The rebel pullout will mark the end of the rebels’ four-year control of eastern Aleppo.

Hundreds of civilians have been killed and tens of thousands displaced in the government’s campaign to retake Aleppo.

Plans to evacuate on Wednesday were scuttled when the area erupted in violence, raising the haunting possibility that all-out war could consume the city again. Much of eastern Aleppo has been reduced to a scene of devastation and rubble.

Earlier Thursday, the International Committee of the Red Cross confirmed that its staff arrived together with the Syrian Arab Red Cross to evacuate 200 wounded people from the enclave, some in critical condition.

Syrian state media have broadcast footage showing a convoy of green-colored municipal buses rumbling toward the agreed-on evacuation point inside the opposition-held area. The Russian military, a staunch Assad ally, said 20 buses and 10 ambulances would take the rebels to the rebel-held areas in the province of Idlib later Thursday.

The Russian military said the government in Damascus had given security guarantees to all rebels willing to leave Aleppo and that the Russians were monitoring the situation using drones.

Separately — but in a key addendum to the deal — Syria state media said 29 buses and ambulances were heading to two Shiite villages besieged by rebels to evacuate those critically ill and other humanitarian cases. The channel quoted Hama provincial governor, Mohammed al-Hazouri, as saying that the medical teams were heading to Foua and Kfraya for those evacuations.

The Turkey-Russia brokered truce-and-evacuations deal for Aleppo was held up Wednesday over demands by Syrian government allies to evacuate the sick and other humanitarian cases from the two villages.

A rebel spokesman involved in the negotiation over Aleppo evacuations said that Iran had made the demands about the Shiite villages besieged by rebels at the last minute, holding up the deal. He spoke on condition of anonymity because of ongoing negotiations.

Lebanon’s Hezbollah terror group said overnight negotiations had reinforced a ceasefire deal to allow the rebels and civilians to leave eastern Aleppo. Shiite Hezbollah militiamen are fighting in the Syrian civil war on the side of President Bashar Assad’s forces.

The handover of Aleppo’s remaining opposition-run neighborhoods to government control would be a turning point in Syria’s civil war, allowing Assad control of most of the country’s urban centers.

The Britain-based Syrian Observatory for Human Rights said the fighting stopped in the city around 4 a.m. Thursday.

Initially the evacuation from Aleppo was to have begun at dawn Wednesday, but quickly derailed, descending into terrifying violence. Residents said government buses arrived in the pre-dawn hours at agreed upon meeting points, where the wounded were first in line to be evacuated after surviving weeks of intense fighting amid destroyed medical facilities and depleted supplies.

But they were turned away by Shiite pro-government militias manning the checkpoints. Then violence erupted: shelling and then airstrikes. The rebels retaliated, at one point shelling the pro-government villages of Foua and Kfraya in Idlib and detonating a car bomb in a frontline area.

Residents, activists and medical staff described mayhem as volleys of shells rained down on the area where tens of thousands of civilians were trapped alongside rebels in gutted apartment buildings and other shelters.

On Thursday, a Syrian army official, speaking by telephone to The Associated Press on condition of anonymity because he was not authorized to speak to reporters, said all preparations are ready for the evacuations.

“The evacuations will begin at any moment,” he said.