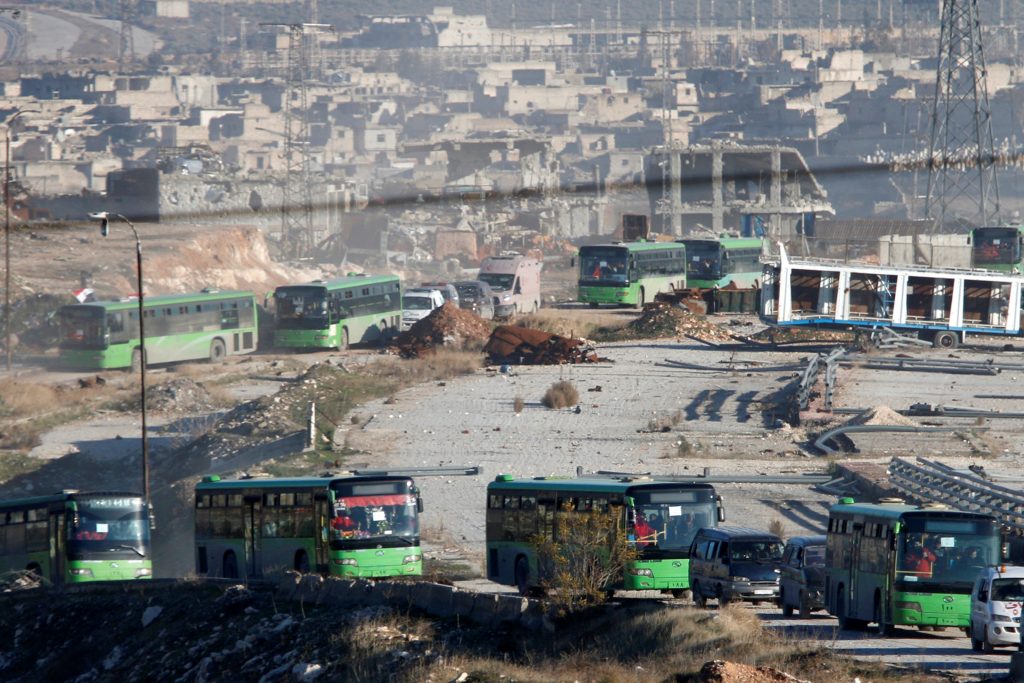 Some 3,000 civilians and more than 40 wounded people, including children, were evacuated from east Aleppo on Thursday in two evacuations, the International Committee of the Red Cross (ICRC) said in a statement.

“Many more” rotations of buses and ambulances would be needed in coming days, said Robert Mardini, ICRC regional director for the Near and Middle East, in an interview with Reuters in his Geneva office. He had just been briefed by ICRC’s Syria delegation chief Marianne Gasser in Aleppo.

“This for us is the first step; it was a positive one,” Mardini said, after the first of two evacuations from the eastern part of the city where government forces are poised to take full control.

The ICRC said a third convoy had headed for Aleppo after dusk.

The first evacuees were escorted on buses and 13 ambulances through government-held west Aleppo to opposition-controlled areas, where they will choose where they want to go.

A team of 14 ICRC staff and nearly 100 volunteers from the Syrian Arab Red Crescent (SARC) took part in the operation, for which they needed a crane to remove debris and burned buses to clear the way into “volatile and unpredictable” east Aleppo, Mardini said. Gasser has also overseen evacuations from Madaya and the Old City of Homs during the nearly six-year war.

“The report we got inside and what my colleagues were telling me was heartbreaking. People are totally exhausted, disillusioned, in very bad shape,” Mardini said.

“But they were so happy to see us, they were thankful for us being there, although we failed them, because it’s too little too late, but yet it is important.”

Syrian authorities conducted only “very light screening” of the evacuees, who were not registered and whose identity papers were not checked, he said.

“So far, the vast majority of people we transferred today are civilians,” he said. The priority remains to evacuate the critically injured, because “it’s a matter of life and death,” and to supervise the evacuation of civilians, he said.

Mardini, asked about evacuation of fighters still in east Aleppo, said: “We do not have clear plans … We don’t know for the next rotation. These are things that are negotiated as we go.”

Remaining in Aleppo are “about 50,000 people, including 40,000 civilians, that will go to West Aleppo,” U.N. envoy for Syria Staffan de Mistura said.

He said the remaining 10,000 were made up of between 1,500 to 5,000 fighters and their families, who would be evacuated to the rebel stronghold of Idlib.

“Without a political agreement or ceasefire, Idlib will be the next Aleppo,” de Mistura said, speaking at a news conference with French Foreign Minister Jean-Marc Ayrault in Paris.

Also Thursday, U.S. Secretary of State John Kerry said that the government of Syrian President Bashar al-Assad is carrying out “nothing short of a massacre” in Aleppo.

Kerry, speaking at a news briefing, said the United States was seeking an immediate, verifiable, and durable cessation of hostilities in Aleppo, and he called on the international community to exert pressure to move the process forward.