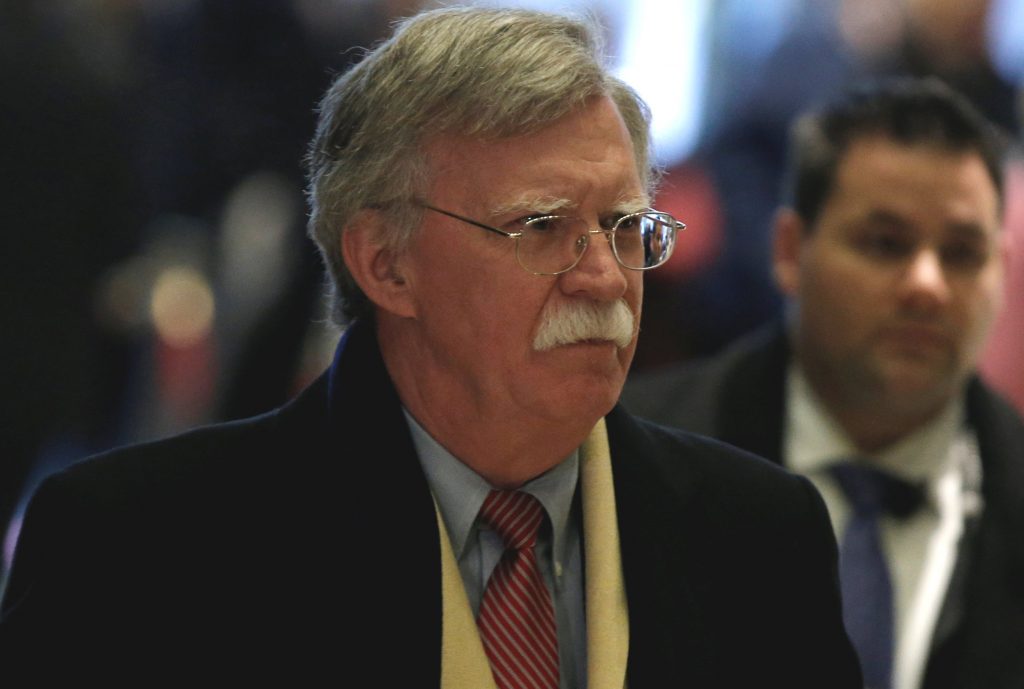 John Bolton, a former U.N. ambassador reportedly being considered for deputy secretary of state in the Trump administration, said Sunday that reports of Russian interference in the presidential election may be a “false flag” conjured up by the Obama administration.

In an interview with Eric Shawn of Fox News, Bolton claimed the Obama administration had “politicized” intelligence and suggested there may have been a hidden motive behind the CIA’s finding that Russians hacked computer networks belonging to the Democratic and Republican National Committees. He questioned why the FBI did not uncover similar evidence of meddling by foreign intelligence services when it investigated Hillary Clinton’s private email server.

“It’s not at all clear to me just viewing this from the outside that this hacking into the DNC and the RNC computers was not a false flag operation,” Bolton said. “The question that has to be asked is, why did the Russians run their smart intelligence service against Hillary’s server but their dumb intelligence services against the election?”

Bolton’s suggestion came after The Washington Post reported Friday that U.S. intelligence agencies concluded Russia intervened in the 2016 presidential race to help Donald Trump win. The CIA shared a secret assessment with key senators during a recent closed-door briefing, telling lawmakers that individuals connected to the Russian government had provided WikiLeaks with thousands of hacked emails from the DNC and others to boost Trump and undermine Clinton, The Post reported. President Barack Obama has ordered a “full review” of suspected Russian hacking during the campaign, and a bipartisan group of senators has called for a probe of the allegations.

The term “false flag” is typically used to describe a covert attempt by the government to advance an agenda by making it seem like its activities are being carried out by another entity.

During his Fox News appearance, Bolton said there should be “very grave consequences” if further investigation showed that Russia did try to influence the presidential election, but he questioned whether a sophisticated foreign intelligence service would leave “cyber fingerprints” after hacking.

Shawn asked whether Bolton was accusing the administration or the intelligence community of “trying to throw something.”

“We just don’t know,” Bolton replied. “But I believe that intelligence has been politicized in the Obama administration to a very significant degree.”

Shawn pressed him: “But would the intelligence officials politicize this — to go so far to something that could potentially damage the very issue of our republic and what we for 200-plus years have stood for?”

“I think the whole thing is called into question, which is why the notion of some kind of independent investigation becomes extremely important,” Bolton said. “I do think it’s critical to answer the question I posed: If you think the Russians did this, then why did they leave fingerprints?”

Bolton said he was convinced that Russia had “both the capability and the intention of doing it,” but said he did not believe enough facts were available to the public. He also expressed concern about the Obama administration trying to complete its review before Inauguration Day on Jan. 20, 2017.

At the end of the interview, Shawn again asked Bolton to address his “false flag” claim, saying “that’s incredibly serious to say that and very disturbing as an American.”

Bolton replied: “We would want to know who else might want to influence the election and why they would leave fingerprints that point to the Russians. That’s why I say, until we know more about how the intelligence community came to this conclusion, we don’t know whether it’s Russian-inspired or a false flag.”

In their closed-door briefing, CIA officials told senators that a growing body of evidence from multiple sources made it “quite clear” that Russia wanted to help elect Trump, The Post reported. Administration officials said evidence pointed to Russia’s role in cyber-intrusions in at least two states and in hacking emails from the DNC and individuals, according to The Post.

“It is the assessment of the intelligence community that Russia’s goal here was to favor one candidate over the other, to help Trump get elected,” a senior U.S. official briefed on the intelligence presentation told The Post. “That’s the consensus view.”

Trump and his top surrogates dismissed reports of Russian interference in the election in appearances on Sunday’s political talk shows.

Trump has been plagued by accusations that he and his team are too cozy with Russia. Trump has said he admires Russian President Vladimir Putin, at one point calling him a stronger leader than President Obama. Trump’s former campaign chairman Paul Manafort resigned over the summer amid scrutiny of his ties to pro-Russian leaders in Ukraine, and Trump’s likely pick for secretary of state, Exxon CEO Rex Tillerson, is already drawing fire from some Republican senators over his friendship with Putin and his company’s significant business interests in the country.