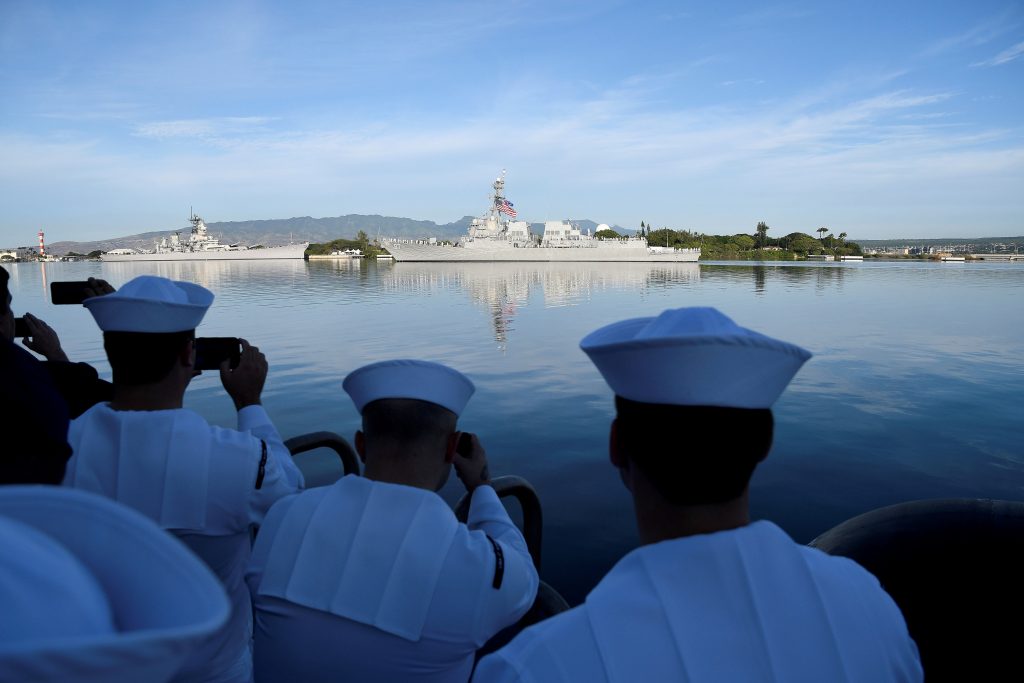 Thousands observed a moment of silence before fighter jets streaked across the sky during a ceremony Wednesday at Pearl Harbor marking the 75th anniversary of the attack that plunged the United States into World War II and left more than 2,300 service members dead.

The crowd bowed their heads at the precise moment 75 years ago ago when Japanese planes began their assault on the U.S. naval base at the harbor. And they stood and clapped when survivors joined active-duty service members and National Park Service rangers in dedicating wreaths to those killed.

Attendees also gave a lengthy ovation to Adm. Harry Harris of the U.S. Pacific Command when he spoke in favor of standing for the national anthem.

The anniversary is a tribute to “what freedom does when it is faced with Fascism,” said Paul Hilliard of the National World War II Museum.

Wednesday’s ceremony started with the USS Halsey sounding its whistle to mark the start of the moment of silence at 7:55 a.m. It ended with F-22 fighter jets flying in formation overhead.

Harris told the crowd that the servicemen attacked at Pearl Harbor “engaged the enemy as best they could,” and there is sorrow for those who died. “Yet we are also inspired by their great gift to the world – the gift of freedom itself,” he said.

The ceremony wrapped up with Marines firing a gun salute and the Pacific Fleet band playing taps.

Laura Stoller accompanied her adoptive grandfather and Pearl Harbor survivor Stan VanHoose of Beloit, Wisconsin, to the event. At one point, she watched as crowds jostled for autographs and photos with survivors.

“All of these men who for so long didn’t get the recognition they deserve – they’re soaking it up. And it’s so fun to see,” Stoller said.

VanHoose, 96, served on the USS Maryland.

Fellow survivor Jim Downing of Colorado Springs, Colorado, said he returns to Hawaii for the anniversary commemorations to be with his shipmates.

“We get together and have a great time and compare our stories,” he said.

Downing said that fear, anger and pride overcame him as Japanese planes bombed Pearl Harbor. Then a newlywed sailor, he recalled a Japanese plane flying low and slow in his direction as he rushed to his battleship from his home after learning of the attack on the radio.

“When he got the right angle, he banked over, turned his machine guns loose,” Downing, now 103, said in an interview at a Waikiki hotel. “He didn’t bank far enough so it went right over my head.”

The next aviator might have better aim, Downing remembers thinking. And with nowhere to hide, “I was afraid,” he said.

His ship, the USS West Virginia, was hit by nine torpedoes.

“We were sinking, and everything above the water line was on fire,” he said.

Downing said that he felt proud while watching sailors balance the capsizing ship by allowing water to seep in. The tactic let the giant battleship slide into mud below.

The West Virginia lost 106 men. Downing, who also served as the ship’s postmaster, spent two hours fighting fires and checking the name tags of the dead so that he could write their families personal notes about how they died.

Pearl Harbor memorial events took place across the country Wednesday. In Texas, hundreds of well-wishers applauded World War II veterans George H.W. Bush and Bob Dole during a patriotic ceremony. A tattered U.S. flag that flew at Pearl Harbor was on display at an Ohio museum, and dozens of WWII veterans in the Cincinnati region recounted their experiences for high school students gathered at the Sharonville Convention Center.

President Barack Obama issued a statement saying that he and First Lady Michelle Obama join Americans in remembering those who gave their lives on Dec. 7, 1941.

“We can never repay the profound debt of gratitude we owe to those who served on our behalf,” he said.

The president said he will visit the USS Arizona Memorial later this month with Japanese Prime Minister Shinzo Abe.