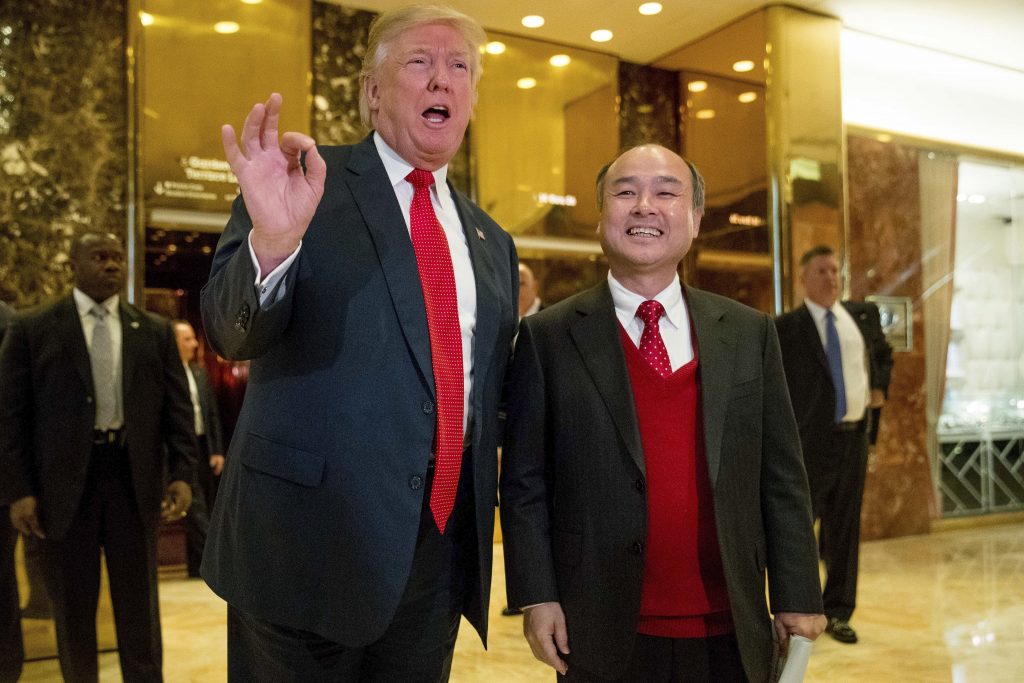 The head of Japan’s SoftBank Group Corp., which in October set up a $100 billion fund for technology investments, said on Tuesday he would invest $50 billion in U.S. businesses, a move President-elect Donald Trump claimed was a direct result of his election win.

The investment, which could create 50,000 new U.S. jobs, revived speculation on Wall Street that U.S. telecommunications giant Sprint Corp., 82-percent-owned by SoftBank, might rekindle merger talks with T-Mobile US Inc. that died under pressure from U.S. regulators.

Trump’s moves since the election to engage with individual companies, while turning his back on broader, years-in-the-works trade deals, show that the President-elect is leaning on the deal-making skills he honed in the boardroom. Trump campaigned against the overregulation of business and is expected to be more open to mergers than President Barack Obama.

The investment announced Tuesday would come from the $100 billion investment fund SoftBank Chief Executive Masayoshi Son is setting up with Saudi Arabia’s sovereign-wealth fund and other potential partners, according to The Wall Street Journal.

Trump made the announcement in the lobby of Trump Tower in Manhattan where he met with the head of SoftBank, a $68 billion telecommunications and tech investment behemoth.

“Ladies and gentlemen, this is Masa from SoftBank of Japan, and he’s just agreed to invest $50 billion in the United States and 50,000 jobs,” Trump said.

“He would never do this had we (Trump) not won the election!” Trump later Tweeted.

Prior to the election, SoftBank said Saudi Arabia’s Public Investment Fund (PIF) would be the lead partner in the fund and could invest up to $45 billion over the next five years. SoftBank expects to put in at least $25 billion. Several other large, unnamed investors are in talks on their participation and could bring the total size of the new fund up to $100 billion, SoftBank said.

Son, who wore a red tie and red sweater under his suit jacket, told reporters his company would create jobs by investing in startup companies in the United States.

“We are going to invest $50 billion into the U.S. and commit to create 50,000 new jobs,” Son said, adding that he saw a lot of “deregulation” under a Trump administration.

Trump and Son did not give a timeline for the investment. Trump’s four-year term will begin after his Jan. 20 inauguration.

Son had hoped to merge Sprint with T-Mobile US to take on U.S. market leaders AT&T Inc. and Verizon Communications Inc.

Shares of Sprint briefly reached their highest level in 2-1/2 years, soon after Son’s comments. They closed up 1.5 percent to $8.17 in heavy trading, ending well below session highs. Shares of T-Mobile US were up 1.8 percent at $55.99.

It was not immediately clear how much of SoftBank’s investment had been disclosed before. Softbank said on Nov. 7, the day before the U.S. election, it planned to make future large-scale investments via the $100 billion tech fund, rather than on its own, to avoid growing already-bloated debt.

Whether or not Trump’s election led to SoftBank’s planned investment, the billionaire’s victory has been a boon to stock investors. The Dow Jones industrial average closed at another record level on Tuesday, its 11th new high since the Nov. 8 vote.

Should the SoftBank fund grow as large as $100 billion, it would be one of the world’s largest private equity investors and a potential kingpin in the technology sector.

SoftBank has also been stepping up investment in new areas. It agreed to buy U.K. chip design firm Arm Holdings in July in Japan’s largest ever outbound deal.