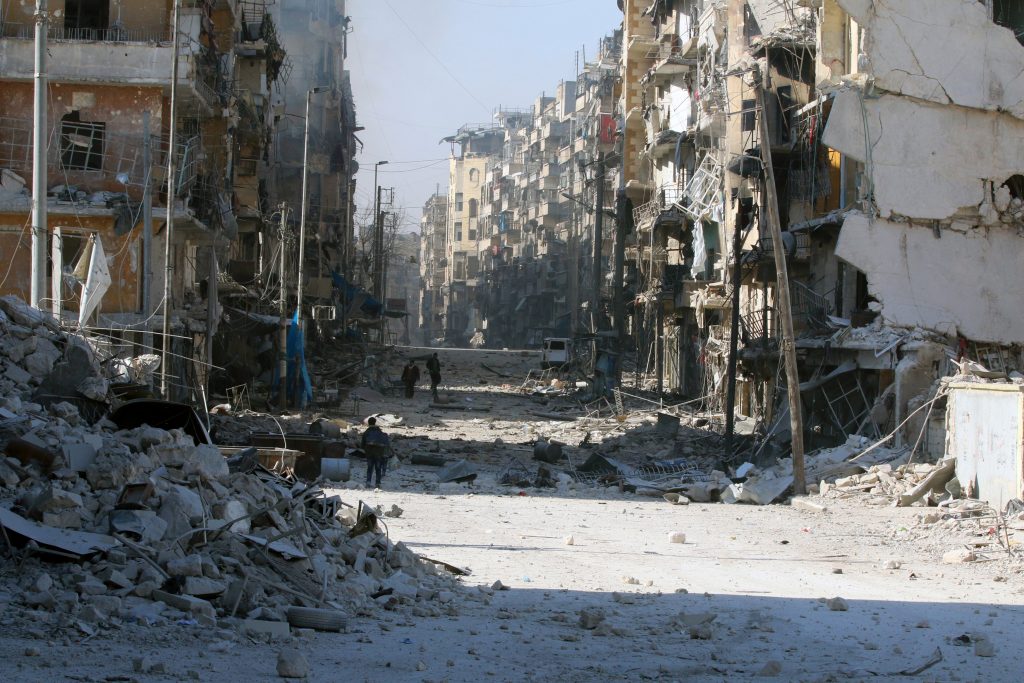 Almost a third of the Syrian rebel enclave in the eastern sector of Aleppo has fallen to government forces in two days, forcing 10,000 civilians to flee, a monitoring group said Monday.

Since Saturday, rebels have lost the entire northern part of the enclave, their worst defeat since they seized the east of Syria’s largest city in 2012, Syrian Observatory for Human Rights director Rami Abdel-Rahman told dpa.

Rebel defenses in the northern part of the enclave appear to have collapsed suddenly after holding up during a five-month siege. The government’s stranglehold was broken only for a few weeks in August, by rebel forces who fought their way in from outside the city.

Some 6,000 civilians have crossed into the Kurdish-controlled Sheikh Maqsoud district, the Observatory said. Others entered government-controlled areas of the city.

Ibrahim Ibrahim, a Kurdish official, said that fighters in Sheikh Maqsoud were aiding the fleeing eastern Aleppo residents despite the area having come under repeated shelling from rebels in recent months.

“The forces there are dealing with children, women, expecting women,” Ibrahim said. “It’s a moral and humanitarian duty, and a patriotic duty, they are Syrians in the end.”

Eastern Aleppo has been devastated by four years of heavy government shelling and airstrikes, which have repeatedly hit civilian facilities and, according to the charity Doctors without Borders, put at least eight of the area’s nine hospitals out of action.

The U.N. late Sunday said that negotiations were still underway with all parties to the conflict to implement a humanitarian plan for Aleppo that would allow food aid and medical staff to be brought in. It also called for the wounded to be evacuated from the city.

U.N. envoy Jan Egeland last week said that rebels had agreed to the plan, but the consent of Syria and its Russian ally was still pending.

The U.N. described the food situation in the east as “particularly alarming” after World Food Programme partner organizations exhausted their stockpiles on Nov. 13, leaving the enclave “effectively … without any available food.”

The UN also noted an uptick in rebel shelling on government-held western Aleppo, where, it said, partner organizations had now registered more than 21,000 displaced people.,

Abdel-Rahman said it was not yet clear whether government forces would immediately mount a push into the remaining areas of eastern Aleppo.

The eastern sector is the last remaining major urban center in the hands of the Syrian opposition. Recapturing it would be a symbolic victory for the regime of President Bashar al-Assad.

It would also allow the regime to deploy its limited forces elsewhere, raising the prospect of further pressure on the remaining rebel strongholds in the northwest and far south of the country.

In another sign that government forces are also on the advance in the equally strategic area on the outskirts of Damascus, Monday saw some 350 rebels evacuated from the town and Palestinian refugee camp of Khan al-Shieh some 20 kilometers southwest of the capital.

The fighters and their families were being bused to the opposition stronghold of Idlib after surrendering their weapons, a government official involved in the process told dpa.

The deal is the latest of several as government forces wrap up resistance in the besieged rebel enclaves south and west of Damascus.

The Syrian conflict, which began in March 2011 with peaceful protests against the al-Assad regime, has spiraled into a four-way conflict between government forces, mainly Islamist rebels, the Islamic State jihadist organization, and Kurdish forces.