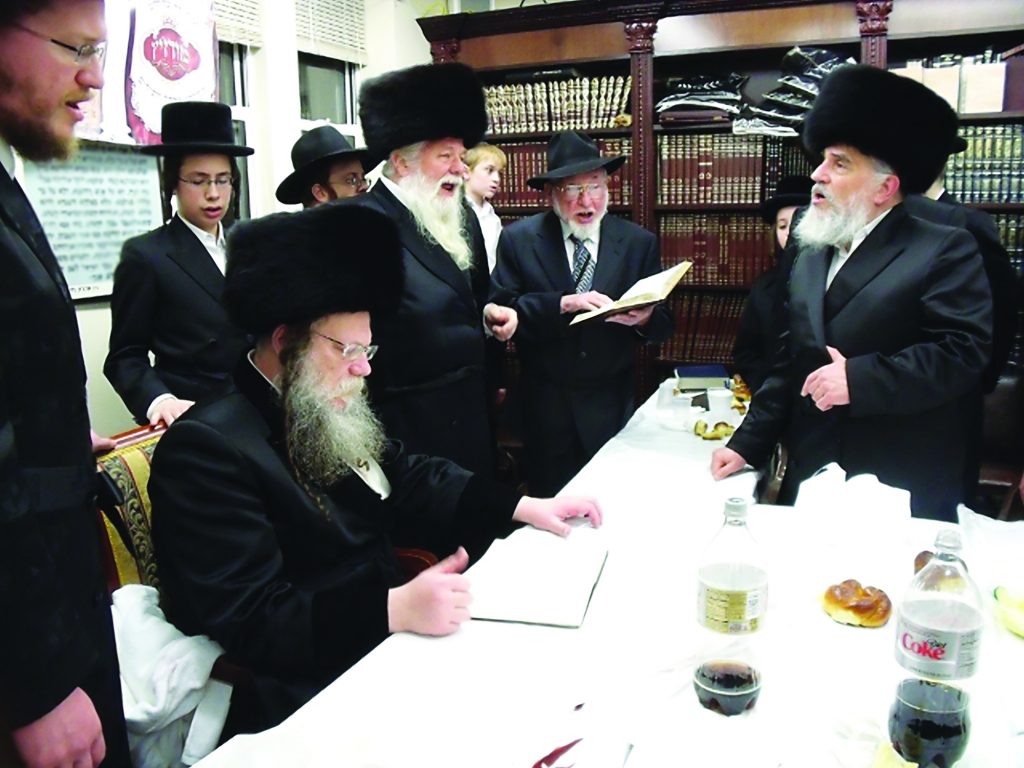 Reb Ben Zion Shenker, z”l, the legendary composer and singer, whose contributions to Jewish music inspired generations, was niftar on Sunday 19 Cheshvan. He was 91 years old.

Generations have grown up on his compositions. Several of Reb Ben Zion’s melodies have become so integral to the Jewish world that many people probably do not even know they originated from him. Thousands of Jewish families welcome Shabbos with his “Eishes Chayil” and sing his “Mizmor l’Dovid” shortly before they bid it farewell. Few chasunos go by without dancing to his “Yassis Alayich.”

Since his first encounter with the Imrei Shaul of Modzitz, Harav Shaul Yedidya Elazar Taub, zy”a, Reb Ben Zion’s name increasingly became inseparable from the Modzitzer Chassidus. For decades, he served as its chief baal tefillah and baal menagen, drawing and uplifting those who came to hear his heartfelt melodies. He remained close to several generations of its Rebbes and remained the world’s authority on its many niggunim.

Reb Ben Zion Shenker’s influence on Jewish music spanned generations and is in many ways unparalleled. With his phenomenal musical memory and precision, he was the recognized authority on thousands of melodies from past generations, which without his efforts would have been forgotten or tainted. His constantly spinning wheels of creativity yielded over 800 original songs. He was among the first to produce records geared towards the frum community. Moreover, Reb Ben Zion was considered a master of song as a form of avodas Hashem. As one friend put it, “He didn’t just sing; it was like listening to a shiur about what the words mean.”

Reb Ben Zion was born in Brooklyn in 1925 on Lag BaOmer, a few years after his father, Reb Mordechai, z”l, and mother, Mrs. Miriam Shenker, a”h, emigrated from Poland. The family, which had lived in a village near Lublin, were Chassidim of the Rebbes of Trisk, a branch of the Chernobyl dynasty. Before leaving Poland, Reb Mordechai consulted Harav Mordechai of Kuzmir, zy”a, who typically forbade travel to America, fearful of the dangerous spiritual influences that were rampant at the time. Reb Mordechai, however, he allowed to go, saying, “I’m not worried about him.”

At a very young age, Reb Ben Zion’s talent was recognized and he was offered a spot in a prestigious choir that sang together with leading chazzanim of the day. Reb Mordechai was apprehensive, fearing it would expose young Ben Zion to the somewhat less than pious nature of “Jewish” music in the 1930’s and only agreed on the condition that his son would not travel with the group out of New York.

Reb Ben Zion attended Yeshivah Torah Vodaath, where he was part of a close group of talmidim who absorbed the unique derech of its Menahel, Harav Shraga Feivel Mendlowitz, zt”l.

Word of Reb Ben Zion’s talent spread, and by the age of 15 he was featured weekly on a Yiddish radio program. However, he received specific conditions from Rav Shraga Feivel, who told him, “Go and sing and then come right back to yeshivah, don’t hang around.” The watchful eyes of the legendary builder of Torah in America and of his parents bore fruit. Not only did Reb Ben Zion remain entrenched in Torah u’mitzvos, not a popular path at the time, but even his music remained unmistakably “Yiddish” in both style and meaning.

In 1940, the Imrei Shaul arrived in America and established his small court in Williamsburg. Eager to reconnect with a Rebbe from his native Poland, Reb Mordechai quickly became attached to the tzaddik, making every effort to attend, together with his sons, his tefillos and tischen.

During the Rebbe’s first year in Williamsburg, Reb Ben Zion was once in the Modzitzer beis medrash when he picked up a book of sheet music of some of the Rebbe’s many compositions and began to hum them to himself. The Rebbe asked, “You can read notes?” and asked the young man to sing some of the niggunim aloud. Impressed by Reb Ben Zion’s fluency in musical notation and his natural abilities, the Rebbe took him on as his “musical secretary,” committing the countless tunes the Rebbe composed to writing, and memory.

Given the central role of music to Modzitz, the position won him a bond with the Rebbe that would continue long after the latter’s passing in 1947. His many recordings of the Chassidus’ niggunim serve as a timeless archive; and Reb Ben Zion’s own renditions of the compositions of the Imrei Shaul and others in the dynasty brought alive the very emotions of the tzaddikim themselves. Each of the Imrei Shaul’s successors frequently consulted him on the finer points of Modzitz’s songs and nusach.

His mastery of the art of the niggun made him a favorite in many other courts as well. As a teenager he was among the regulars at the melaveh malkahs of the Bobover Rebbe, Harav Shlomo Halberstam, zy”a, who then lived on Manhattan’s Upper West Side. In 1946, he visited Eretz Yisrael together with his father and while there, gathered a treasury of tunes from Ger and Belz, among others. He was called upon several times by the Lubavitcher Rebbe, Harav Menachem Mendel Schneerson, zy”a, to sing at farbrengens.

In the late 1940s, Reb Ben Zion married Dina Lustig of Cincinnati, whose father, Reb Avrohom, z”l, served as assistant to Harav Eliezer Silver, zt”l. The couple lived for many years in Crown Heights before relocating to Flatbush. Reb Ben Zion first worked in a family-owned knitting factory before making his living as a diamond dealer, never using music as his livelihood.

Despite the fame of his songs, Reb Ben Zion was remembered as a humble figure, known for his friendly manner and personal warmth. Few outside of his immediate circle or avid followers of Jewish music would have even recognized him. He was kind and thoughtful enough to sit for hours singing into a tape recorder for people who asked to be reminded how certain tunes went.

On many occasions he sang, free of charge, at the chasunos of those who could not afford to pay a singer. Often, he went out of his way to compose new niggunim for these occasions as a way of bringing additional simchah to the chassan and kallah and their families.

In 1956, Reb Ben Zion released his first record album. It was a breakthrough, not only for the many songs that it quickly popularized, but as one of the first popular recordings for and by the frum community. His latest recording was released only a few weeks ago and another is still in production. Over the last 60 years, he released dozens of albums of both traditional and original compositions, creating the base of the record shelf in many frum homes.

Mr. Andy Statman, a longtime friend and fellow musician who worked with Reb Ben Zion on his more recent albums, said that production of his last recording was done with tremendous mesirus nefesh.

“There were a lot of times that I was scared for him to come to the studio, but once he started singing he became full of life and [vigor],” he said, “He was unstoppable, because to him music was avodas Hashem, it was about dveikus and he did it to help spread what he saw as the uplifting message of the niggun.”

Those who were privileged to hear Reb Ben Zion’s heartfelt davening at the Modzitzer shtiebel in Crown Heights and later in Flatbush, recalled that he typified the term “baal tefillah.” Not only was he an absolute expert on nusach and constantly introducing new melodies, his emotion evoked in mispallelim the deepest meaning of the words he uttered. Whether it was his heartrending Ne’ilah, which he led even this year despite his advanced age and weakened state, or his lively Simchas Torah hakafos, the power of Reb Ben Zion’s voice connected all who heard it to the essence of the occasion.

Reb Ben Zion possessed a unique type of genius that was only known to those who worked closely with him. While working on an album on Pesach songs, a friend suggested that he add an original Chad Gadyah to the mix. He initially demurred, but by the next day it was written. Reb Ben Zion later said that the tune came to him that evening while driving to the airport. On several occasions he was asked to write niggunim to sing at simchos he attended and he wrote them out, notes and all, on the spot, on paper napkins.

When a set of lost compositions from the Divrei Yisrael of Modzitz, zy”a, were discovered, it was Reb Ben Zion who was able to piece together what to others was a confusing puzzle and determine exactly how the notes fit with the words.

Another friend and colleague, Mr. Ari Weider, who edited many of Reb Ben Zion’s recordings, said that his ear for music was such that he could detect the smallest imperfection.

“He was a real perfectionist,” he said. “I once played a recording for him and he told me there was noise in the background. After listening 15 times I picked up on a little speck, but he couldn’t understand how anybody else couldn’t hear it.”

As his prowess as a composer and singer grew, he became increasingly looked to by aspiring Jewish musicians as the elder statesman of their trade, and was often turned to for advice, mentoring, and his famously good ear. In addition to his voice and phenomenal memory, colleagues and admirers often said that, above all, the heart and emotion that Reb Ben Zion put into the niggunim he sang is what truly distinguished him from others in the field.

“He leaves behind a tremendous legacy,” said Mr. Weider. “Singing wasn’t an end to itself, it was a way of elevating a person. Every song he wrote had its own story and he could tell you right away what he was trying to give over to the listener. His influence on Jewish music is one of real heimishe Yiddishe music that will last for generations.”

For more coverage of Rav Shenker, z”l, see last week’s Inyan magazine, from where these photos were taken.