Community Netanyahu at the Hamodia Economic Conference: ‘Torah learning is the secret of our heritage. It is our eternity.
Community 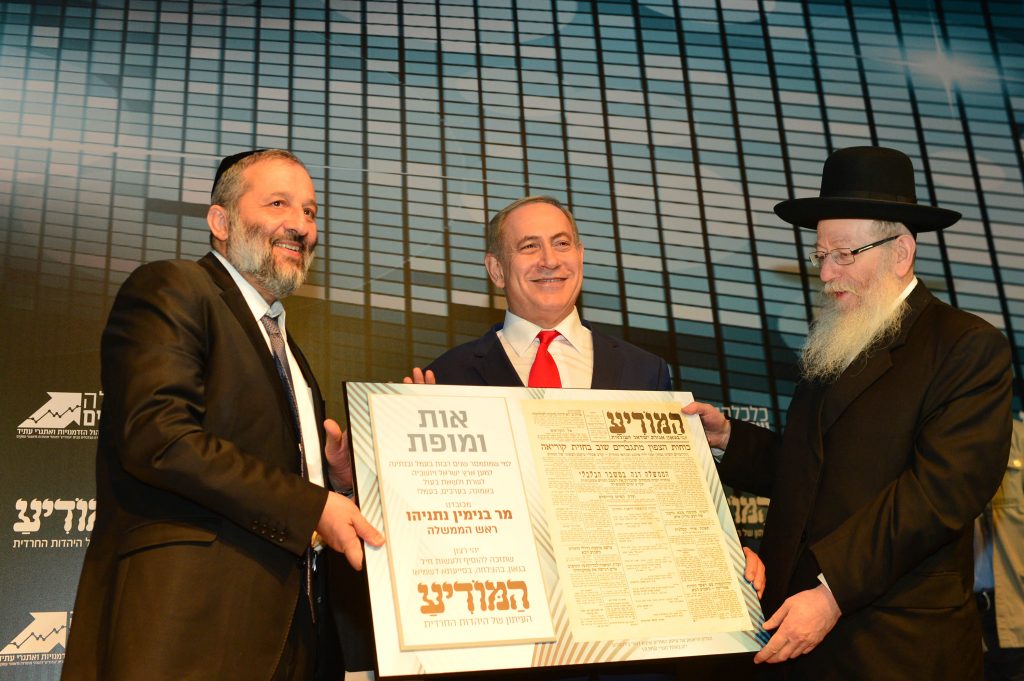 The Israeli Hebrew Hamodia held an economic conference this week for over a thousand people representing senior management and the chareidi business world. Senior government officials and executives from Israel’s major corporations took part. Many of them noted that it was the first time they were being introduced to the power of chareidi economics and expressed their amazement at the constant growth and expansion.

The program included a wide array of speeches and forums addressing subjects on the agenda of the chareidi sector, namely the housing crisis now facing many parents and young couples. A majority of the speakers and panelists, including Prime Minister Netanyahu, who closed out the event, offered their views on the subject.

The overriding sense was that for the first time, productive and practical discussions took place that will influence future efforts on the legislative front.

One of the day’s early speakers was former Interior and Education Minister Gideon Saar, who noted that he is a longtime reader of Hamodia, and who praised the representatives of the chareidi sector. “Who knew what the Health Ministry was until it was taken over by Rabbi Litzman?” he asked. “It was a minor ministry that everyone fled from. And now we see reforms and surprise inspections. Look what Rabbi Gafni has done on the finance committee. But it’s not only there. One can see the work of the chareidi representatives in local authorities and we can see that they are professional and infused with a sense of mission for the public.

One of the sessions was “Companies, Authorities and Institutions and the Third Sector,” which was attended by the mayors of the large chareidi cities of Bnei Brak, Beit Shemesh and Modiin Illit. They described their unique challenges as leaders of chareidi cities, and how their cities do not enjoy high arnona (land tax) revenues, but manage to raise resources and even earn the proper management award year after year.

The session was closed by MK Rabbi Moshe Gafni, who began by announcing that the chareidi MKs had obtained another NIS 48 million for yeshivah budgets.

He then spoke about the seemingly unnatural success of the Israeli economy. It makes no sense, he said, that a country surrounded by enemies, with such huge defense costs, has declining unemployment and rising credit ratings. Living standards should have gone down but they are going up. He attributed it to support for the yeshivos.

Later, Housing Minister Yoav Galant described the work being done to date in an effort to resolve the housing shortage, but admitted there was no short-term solution. “While we are planning to flood the market with apartments, no solution will be evident before 2018, when thousands of units will be completed.”

Finance Minister Moshe Kachlon also spoke about the housing crisis. “I was given the toolbox and I am aware of the weight of this mission. To date, we have released thousands of apartments but I know that it is not enough. With that, the breakthrough is still ahead of us and, b’ezras Hashem, in a year or two we will see the fruits of the investment, when the market will be flooded with apartments and the prices will be affected.”

One of the most fascinating panels of the day was the health forum, at which the CEOs of all the health funds sat with several hospital directors and the health minister. The focus of the panel was how the health system will look in another decade, with an emphasis on the chareidi sector.

The panelists highlighted the weak points of the health system, as well as the massive investments that are already showing results.

Health Minister Rabbi Yaakov Litzman noted that his ministry is investing huge resources in prevention. He noted that he would be traveling to the United States this week to promote a new method that is being used there for preventing radiation damage. The funding required is $60 million, which he hopes to raise by allowing the export of medical cannabis abroad.

The panel was closed by Interior Minister Rabbi Aryeh Deri, who noted that he reads Hamodia each day, and that he wishes that Torah-true Sephardic Jewry would have such a high quality newspaper. He also spoke about the housing crisis and his ideas on the issue. He emphasized, “When we work together we see results. When each one acts alone there is no brachah.”

The conference concluded with a keynote speech by Prime Minister Netanyahu, introduced by Rabbi Litzman, who praised the unity of the coalition and how the chareidi parties are working with the government on so many issues such as Shabbos, needs of the yeshivos, the draft law and more. He thanked the prime minister for attending the conference. “The Prime Minister is experiencing difficult days, with opponents from inside and out, but he knows that the chareidi partners are at his side,” he said.

He then stated that with all the praise, there are obligations as well, namely on the housing front. Rabbi Litzman demanded that housing grants be reinstated for secondhand housing and for the periphery, and noted that the coalition agreement states that the chareidi sector will get 10 percent of new housing, as per its percentage of the population, but that is not happening yet — far from it.

The prime minister then got up to speak, praising the work of the chareidi ministers and their solutions to disagreements and complicated issues.

“I make sure to learn Torah every week with my son. He was home this week and we learned the parashah together,” Netanyahu said. “And I say this will all my heart, not just as lip service — Torah learning is the secret of our heritage. It is our eternity. That is how I raised my children, so they should have where to draw real values from.

“The Torah world is thriving and growing here, baruch Hashem, in Eretz Yisrael.

“Today, I see chareidim involved in real estate or other fields, and I see successful developers and I have no doubt that they reached these achievements in the merit of their Torah learning. We are also leading in employment for chareidi women.

“I heard what Rabbi Litzman said about the housing crisis. We will advance housing solutions, and the solutions we promise for the chareidi sector will bring about reduced prices and will also contribute to the general sector.

“We will work together and this partnership will continue to benefit all of Israel’s residents.”