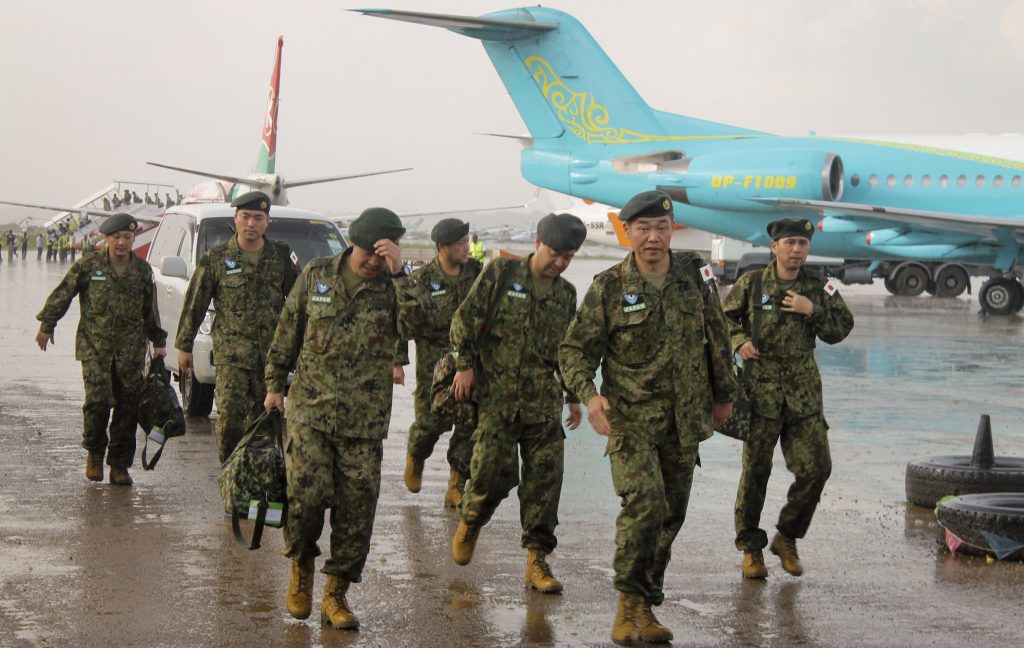 Japanese peacekeepers, with a broader mandate to use force, landed in South Sudan Monday, the first overseas deployment of the country’s troops with those expanded powers in nearly 70 years.

Dressed in green camouflage uniform, Squad leader Yoshino Tanaka stepped off the plane at the head of the Japanese group. He was greeted and shook hands with Japan’s ambassador to South Sudan, Masahiko Kiya.

The 350 Self-Defense Forces will replace a previous contingent of Japanese peacekeepers who served in the United Nations Mission in South Sudan, but did not have mandate to use force. The new troops will be tasked with engineering and construction in the capital, Juba.

For the first time since the end of World War II, these peacekeepers will have the ability to use force to protect civilians, U.N. staff and themselves. Japan’s constitution, drafted under U.S. direction after the war, forbids the use of force in settling international disputes, but the government has reinterpreted the constitution to allow Japanese troops to use force in some situations.

Approved by the Japanese legislature in 2015, the expanded capacity to use force was opposed by some in Japan who feared that it could entangle the country’s military in an overseas conflict and that it violates Japan’s anti-war constitution.

But Japanese Prime Minister Shinzo Abe argued that the broader military powers give Japan the ability to respond to growing threats that include China’s growing military assertiveness and North Korea’s nuclear ambitions.

The deployment shows the growing trust the Japanese public places in its Self-Defense Forces, Sheila Smith, a senior fellow for Japan studies at the Council on Foreign Relations told the Associated Press.

However, she said that many “people are worried that this first case of the Self-Defense Force’s greater powers could run into problems and be put into a bad situation in South Sudan.”

The Self-Defense Force’s expanded powers will first be tested in South Sudan, the troubled East African nation that has seen continuous fighting since its civil war broke out in December 2013. There are more than 12,000 U.N. peacekeepers already in South Sudan, who have faced criticism for failing to protect civilians.

In July, two Chinese peacekeepers died and five others were wounded after their vehicle was struck with a rocket propelled grenade as fighting swept Juba.

Japan’s Self-Defense Forces will still not be able to engage with an opposing army — like South Sudan’s — the only force that is currently in the capital, said the Council on Foreign Relations’ Smith.

“It’s not as if Japan has unleashed its military,” she said.