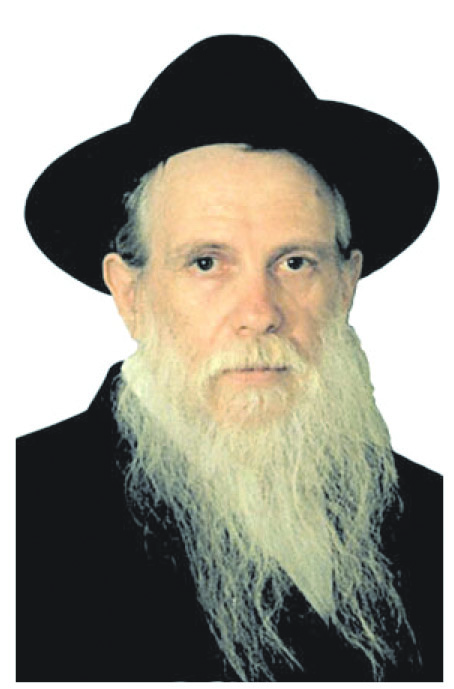 The olam haTorah was deeply saddened to hear after Shabbos of the passing of Harav Nosson Tzvi Shulman, zt”l, Rosh Yeshivas Slabodka. Rav Nosson Tzvi was a gaon in all areas of Torah, one of the eminent talmidim of the Chazon Ish, zt”l, and a pillar of the community of Strasbourg, France, for many years. He was 86.

Rav Nosson Tzvi Shulman was born on 14 Sivan 5690/1930 in Slabodka, the eldest son of Harav Mordechai, Rosh Yeshivas Slabodka, and Rebbetzin Chana Miriam, the daughter of Harav Yitzchak Eizik Sher, zt”l, founder and Rosh Yeshivah of Slabodka. Reb Nosson Tzvi was raised in a home that embodied Torah and yiras Shamayim, and his chinuch was molded by his illustrious grandfather and parents, who groomed him for greatness.

When young Nosson Tzvi was growing up, the family lived in Slabodka and he studied at the local cheder, making great strides in his learning, together with ybl”c his close friend Harav Yitzchak Grodzinksi, shlita.

When the war broke out, the family, along with the rest of the town, was forced to move into the Kovno ghetto, where they spent the rest of the war years. It was through great hashgachah and miraculous circumstances that they survived. In 1942, Reb Nosson Tzvi’s father traveled to the United States in an effort to help the yeshivah out of a severe financial crisis, while his grandfather, Rav Yitzchak Eizik, traveled to Switzerland for medical reasons.

Reb Nosson Tzvi remained alone with his mother, a”h, who set aside her personal suffering and dedicated herself to the Rabbanim and bnei yeshivah, helping them in a myriad of ways. She would travel periodically to Vilna with huge sums of money that her husband sent from America, which she distributed as per his instructions to the thousands of Roshei Yeshivah, Rabbanim and Torah scholars who had migrated there.

While incarcerated in the Kovno ghetto, Rebbetzin Chana Miriam learned about the “tickets to life,” special work cards that the Germans distributed, and she made herculean efforts to obtain 70 of these cards.

It was around then that young Nosson Tzvi reached bar mitzvah. He was prepared for the occasion by Harav Mordechai Zuckerman, who helped with the drashah and taught him the halachos of putting on tefillin.

When the danger in the ghetto grew more acute, Rebbetzin Chana Miriam hid the children in gentile homes. Miraculously, they were returned at the end of the war. At that time, she entrusted the chinuch of young Nosson Tzvi to the able hands of Harav Mordechai Pogromansky, zt”l.

After the war, in Cheshvan 5706/1945, the entire family traveled to Eretz Yisrael, reunited in Bnei Brak, and reestablished their home of Torah and yiras Shamayim.
Reb Nosson Tzvi began to attend Yeshivas Knesses Yisrael Chevron. When Yeshivas Slabodka was established on Lag B’Omer of 5707/1947, he was one of the three bachurim that formed the nucleus of the new mossad that was a perpetuation of the one founded and led by his grandfather and father.

At Slabodka, Reb Nosson Tzvi became renowned for his diligence and brilliance, toiling day and night over his learning and not moving on until the concepts were crystal clear to him.

His father, Rav Mordechai, wished for his son to be introduced to the Chazon Ish; thus, in 5708/1948, he sent Rav Nosson Tzvi to the Gadol with a halachic question on a Megillah. From that point on, a bond was forged with the Chazon Ish that continued for years to come, and Rav Nosson Tzvi became one of his closest disciples. They spoke together regularly in learning, and eventually established a chavrusa together with ybl”c Harav Yechezkel Bretler, shlita. He would often say that everything that he gained in learning he received from the Torah of the Chazon Ish, and their extensive conversations in learning, especially on Maseches Kodshim.

When he became of age, the Chazon Ish suggested a shidduch with Leah, the daughter of Harav Yechiel Michel Schlesinger, zt”l, Rosh Yeshivas Kol Torah. The Chazon Ish said of the bachur: “There is no one like him a lamdan and there is no chacham like him.” On Rosh Chodesh Cheshvan 5714/1954, the wedding was held in Bnei Brak, and the Chazon Ish attended for a significant part, despite it being a mere two weeks before his passing.

After their marriage, the couple lived in Yerushalayim for half a year, where Rav Nosson Tzvi learned in the kollel of the Mirrer yeshivah. During this time he became close to Harav Shlomo Zalman Auerbach, zt”l, and Harav Yosef Shalom Elyashiv, zt”l, with whom he consulted extensively on matters of halachah.

After half a year they moved to Bnei Brak, where Rav Nosson Tzvi began teaching in Yeshivas Slabodka, both on the merits of his own wisdom and as a disciple of the Chazon Ish. He conveyed to the yeshivah the legacy of Slabodka, begun in his father’s days, and at the same time worked to imbue in talmidei hayeshivah the importance of dikduk b’halachah, following the guidance of the Chazon Ish.

The shiurim in Slabodka that he delivered for more than 10 years became renowned for their brilliance and proficiency in all parts of Shas.

In those years, he was instrumental in establishing a beis din under the leadership of Harav Nissim Karelitz, shlita, and also helped him appoint the Dayanim. Rav Nosson Tzvi was also involved in establishing various yeshivos and mosdos.

Twenty eight years ago, on 18 Cheshvan 5749/1988, he suffered a medical incident and, after a time, felt that he could no longer dedicate his full energies to the yeshivah. He moved to Strasbourg, France, where he began learning in Yeshivas Chachmei Tzarfas. He remained there for decades, helping to develop the yeshivah and kollel there, becoming close to many of the local residents, and guiding them in Torah and hashkafah.

When he had to travel to Los Angeles for medical care, he continued disseminating Torah and hashkafah to the local community. Throughout his life he dedicated himself to Torah learning with great toil and modesty, studying b’chavrusa with prominent talmidei chachamim and enlightening many baalei batim through his shiurim.

He was renowned also for his yiras Shamayim and heartfelt tefillos.

His home was always open to the needy and downtrodden and, despite his constant learning, he found time to help those who sought him out, with great warmth and good cheer.

Last year, the Shulmans returned to Eretz Yisrael from Strasbourg, and since then, Rav Nosson Tzvi suffered greatly. Despite his serious condition, he never desisted from his daily learning schedule and strictest adherence to every aspect of halachah. This past Shabbos he felt unwell and was hospitalized, where he lost consciousness. With his family and students present, reciting Shema Yisrael and Viduy, he returned his soul to its Maker.

When Shabbos departed, the sad news began to spread, plunging Yeshivas Slabodka and its Rabbanim into mourning.

The levayah took place on Sunday from the yeshivah, and then continued on to Yerushalayim, where burial took place on Har Hamenuchos.

Harav Nosson Tzvi is survived by his Rebbetzin, Leah; his sisters, the wife of Harav Moshe Hillel Hirsch, and Rebbetzin Esther Rivka Zaks, wife of Harav Amram Zaks; and his sons, Rav Yechiel, a Rosh Kollel in Kadima; Rav Chaim Yitzchak, Rosh Kollel in Slabodka; Rav Avraham Yeshayahu of Petach Tikvah; Rav Moshe Yehudah of Strasbourg, and Rav Simchah Shmuel of Manchester; and his daughters, the wives of Harav Moshe Hirsch, Maggid Shiur in Lakewood, Harav Gershon Kaplan of Detroit, Harav Meir Simcha Braverman of Yerushalayim, and Harav Eliyahu Havlin of Yerushalayim, grandchildren and great-grandchildren who follow in his path.