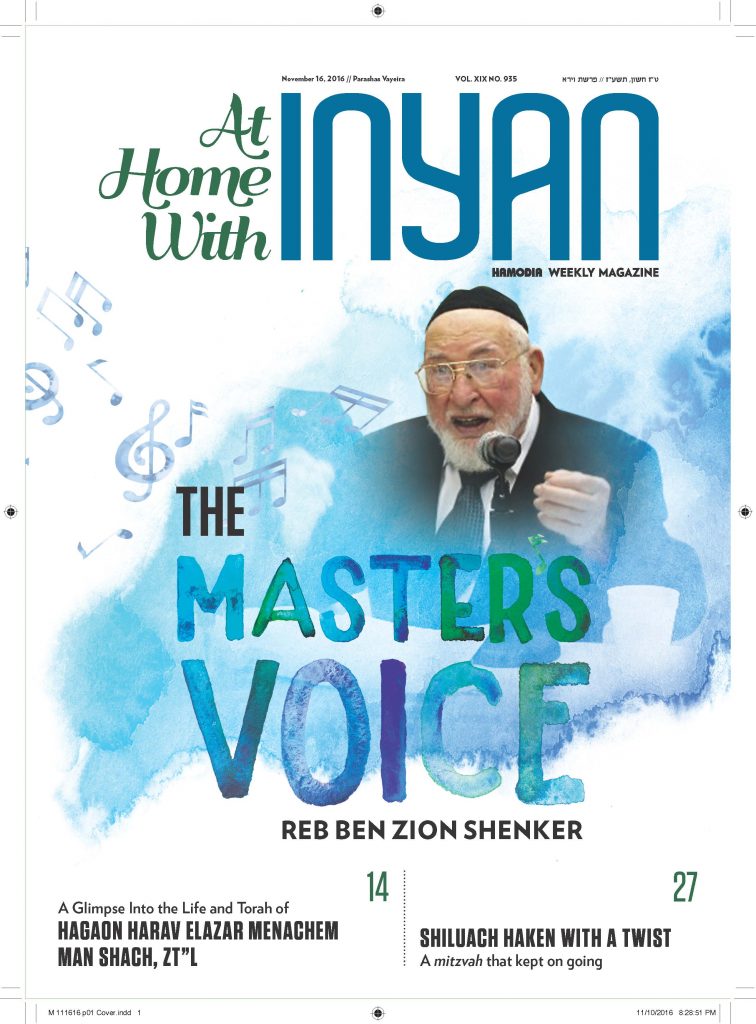 Generations have grown up on his compositions. Several of Reb Ben Zion’s melodies have become so integral to the Jewish world that many people probably do not even know they originated from him. Thousands of Jewish families welcome Shabbos with his “Eishes Chayil” and sing his “Mizmor le’Dovid” shortly before they bid it farewell.” His “Yasis Alayich” plays at almost nearly every chasunah.

Since his first encounter with the Imrei Shaul of Modzitz, Harav Shaul Yedidya Elazar Taub, zy”a, Reb Ben Zion’s name became increasingly inseparable from the Modzitzer Chassidus. For decades, he served as its chief baal tefillah and baal menagen, drawing and uplifting those that came to hear his heartfelt melodies. He remained close to several generations of its Rebbe’s and remained the world’s authority of its many niggunim.

Reb Ben Zion was born in Brooklyn in 1925 shortly after his father, Reb Mordechai, z”l, and mother, Mrs. Miriam Shenker, a”h, had emigrated from Poland. The family had been Chassidim of the Rebbes of Trisk, a branch of the Chernobyl dynasty. Reb Ben Zion attended Yeshivah Torah Vodaath, were he was part of a close group of talmidim that absorbed the unique derech of its Menahel, Harav Shraga Feivel Mendlowitz, zt”l.

At a very young age, Reb Ben Zion’s talent was recognized and he was selected to join a choir that sang together with prominent chazzanim and, by 15, he was featured weekly on a Yiddish radio program.

In 1941, while in the court of the Imrei Shaul, who had recently escaped from Europe, he picked up a book of sheet music of some of the Rebbe’s many compositions and began to hum them to himself. The Rebbe said, “You can read notes?” and asked the young man to sing some of the niggunim aloud. Impressed by Reb Ben Zion’s fluency in musical notation and his natural abilities, the Rebbe took him on as his “musical secretary,” committing the countless tunes the Rebbe composed to writing, and memory.

In the late 1940s, Reb Ben Zion married Dina Lustig of Cincinnati. The couple lived for many years in Crown Heights before relocating to Flatbush. Reb Ben Zion first worked in a family owned knitting factory before making his living as a diamond dealer. Despite the fame of his songs, Reb Ben Zion was remembered as a humble figure, known for his friendly manner and personal warmth.

In 1956, Reb Ben Zion released his first record album. It was a breakthrough, not only for the many songs that it quickly popularized, but as one of the first popular recordings for and by the Orthodox community. His last was released only a few weeks ago and another is still in production. The melodies Reb Ben Zion authored in his lifetime number well into the hundreds.

As his prowess as a composer and singer grew, he became increasingly looked to by aspiring Jewish musicians as the elder statesman on their trade, and was often turned to for advice, mentoring, and his famously good ear. In addition to his voice and phenomenal memory, colleagues and admirers often said that, above all, the heart and emotion that Reb Ben Zion put into the niggunim he sang is what truly distinguished him form others in the field.

He is survived by his daughters; Mrs. Esther Reifman, Mrs. Adele Newmark and Mrs. Brocha Weinberger as well as many grandchildren and great-grandchildren.

A full tribute will appear, be”H, in a future edition