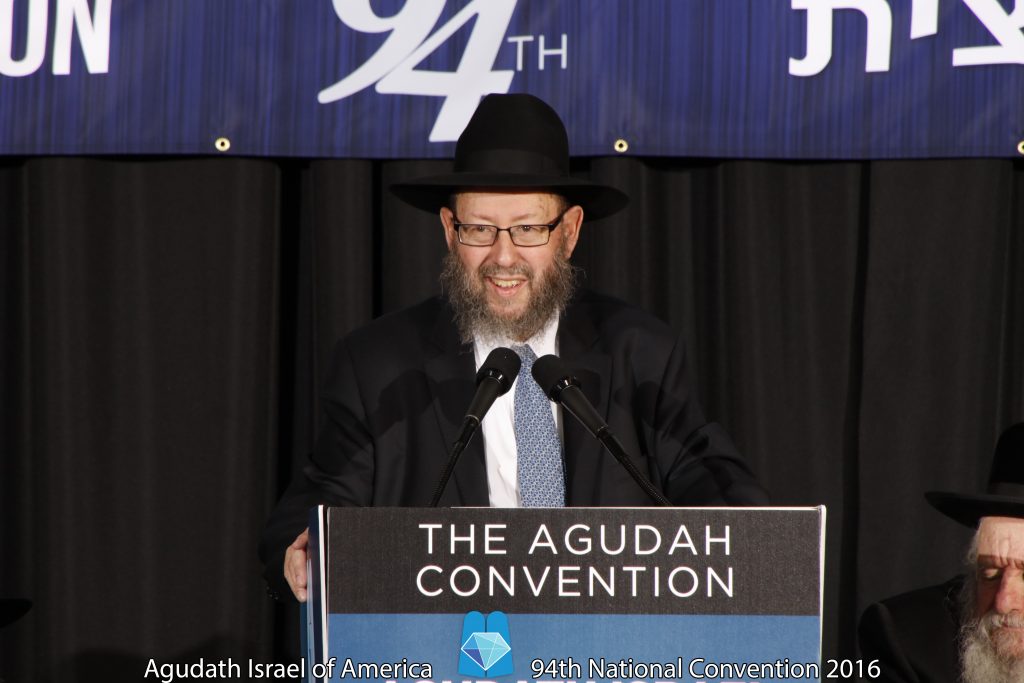 In a world where trouble lurks at every corner and our children are faced with unprecedented challenges, having a healthy sense of self and a strong set of values is crucial to those who seek to live a Torah lifestyle and to ensure the continuity of the mesorah that has kept the Jewish community thriving for generations.

The importance of a Torah-true Jewish identity was the focus of Agudath Israel of America’s 94th National Convention, which opened Thursday. Well over a thousand people flocked to the Crowne Plaza Stamford for the sold-out weekend of enlightenment and inspiration, at a convention themed “Who We Are: Celebrating the Many Facets of Klal Yisrael.”

Captivating speakers kept audiences spellbound at the numerous opening-night sessions, offering a variety of perspectives on identifying what makes Klal Yisrael special as a people in order to build a strong Jewish future. In addition to those who made the trek to Stamford, live broadcasts and online streaming were viewed by thousands more across the globe.

It was a standing-room-only crowd at the keynote session, which began with remarks by Rabbi Dovid Lefkowitz, co-chairman of the convention. Rabbi Lefkowitz noted the Agudah’s Lefkowitz Leadership Initiative, which was founded in memory of his father, Rabbi Yisroel Lefkowitz, who had challenged others to engage the next generation as active members of Agudath Israel of America.

Rabbi Shmuel Kamenetsky, Philadelphia Rosh HaYeshiva and chaver Moetzes Gedolei HaTorah, exhorted the audience to follow in the footsteps of Avraham Avinu, who curtailed his own limud Torah in order to be able to bring others closer to the Ribono Shel Olam. Rabbi Kamenetsky noted that many in Klal Yisroel are being lost today and that we are obligated to do our part to save them, much like Avraham Avinu did in his day.

Rabbi Yosef Elefant, R”M Yeshivas Mir Yerushalayim, spoke of the importance of every individual having a sense of self. That sense of individual worth must be based on real value – no small task in a world where financial security and personal clout are of paramount importance to many. Rabbi Elefant praised Agudath Israel of America, founded to provide Torah Jews with an identity based on real truths, as a crucial component in that important mission.

Rabbi Yissocher Frand, Rosh Yeshiva of Yeshiva Ner Yisroel, described the essence of a Jew as mesiras nefesh and asserted that while Jews may have a reputation as being stubborn and overly ambitious, those same traits were embedded in our spiritual DNA to give us the ability to stand strong in the face of adversity. Recalling the bravery of those who have given their lives al kiddush Hashem, Rabbi Frand exhorted everyone to face their personal struggles head-on because the ability to rise to the challenge is, indeed, “who we are.”

The final speaker of the session, Rabbi Yisroel Reisman, Rosh HaYeshiva of Yeshiva Torah Vodaath and Rav of Agudath Israel of Madison, shared the power of hilchasa, a fierce adherence to halacha that has singlehandedly given rise to the tremendous growth of Orthodox Judaism in America over the last 70 years. Using that same passion for hilchasa to overcome the challenges in our own lives, said Rabbi Reisman, will be a driving force that will help us all bring Moshiach closer than ever.

A video presentation highlighted an initiative sparked by the keynote speech of the 2015 convention delivered by Rabbi Dovid Ozeri, Rav of Congregation Yad Yosef in Flatbush, who lamented the paltry salaries paid to rebbeim. Since then, Torah Umesorah, in conjunction with Agudath Israel, has launched a new project entitled The Rebbe Initiative, which will raise millions of dollars to help supplement the incomes of those who devote their lives to chinuch.

The impact that we have on others cannot be overstated, noted Rabbi Farhi, a sentiment echoed by Assemblyman Goldfeder, who said that while politicians realize that they are constantly in the spotlight, all Orthodox Jews must recognize that they are being similarly viewed by the outside world. Rabbi Gluck shared his own experiences, shattering preconceived notions regarding the Jewish community and stressing the importance of treating everyone with respect.

Thursday night sessions included a real-life presentation by Chayim Aruchim about a family who faced a painful end-of-life situation; a Bnos Agudath Israel leadership event; a Yarchei Kallah; a Q&A session featuring Rabbi Elya Brudny, Rosh Yeshiva of the Mirrer Yeshiva in Brooklyn, and Rabbi Elefant; and a forum on getting and staying married. Also taking place were live interviews and recaps, the annual Pirchei director’s meeting and a meeting of Maryland delegates to the Agudath Israel convention. Two special closed sessions given by Rabbi Brudny and Rabbi Aharon Feldman, Rosh HaYeshiva of Yeshivas Ner Yisroel, attracted close to 100 mental-health professionals.

The excitement that permeated the sessions overflowed into the lobby and was evident throughout the building.

“There was electricity in the air, an exuberance emanating from a crowd that came from across America,” said Chaskel Bennett, a member of the Agudah’s board of trustees. “Regional directors from California, Ohio, Florida, Illinois and Maryland, dozens of young activists coming to their first convention seamlessly blending in with seasoned veterans, askanim, activists, community leaders, Gedolei Yisroel and Roshei Yeshiva, all under the banner of Agudath Israel.”

“Whoever conceived of the concept of a national Agudah convention so many decades ago,” concluded Mr. Bennett, “could not have dreamed that the convention would be as vibrant, relevant and important as ever in the year 2016.”