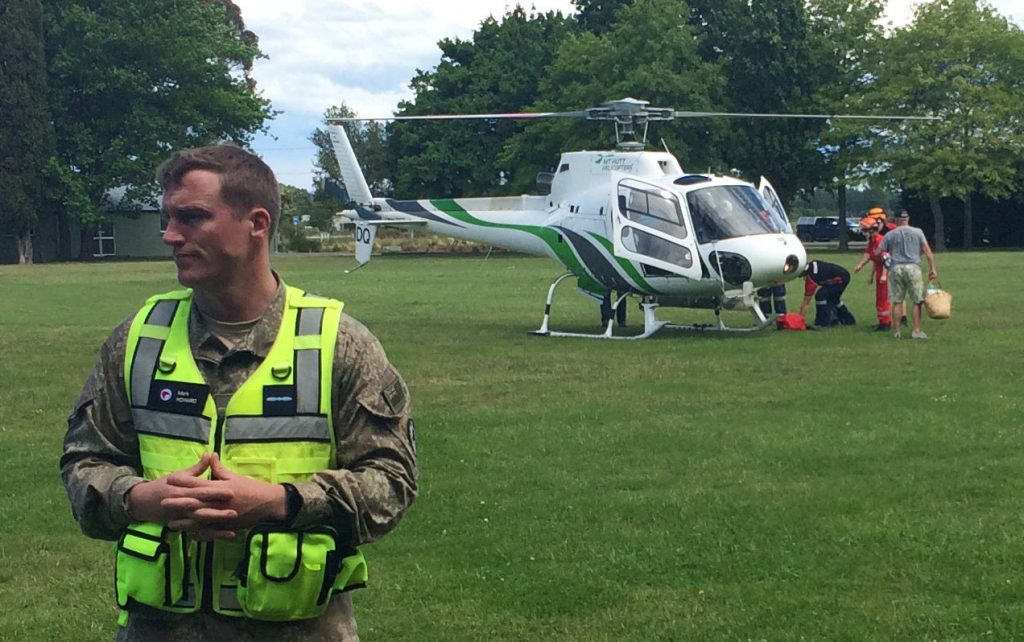 New Zealand military leaders said Wednesday they had almost completed the evacuation of more than 700 tourists and residents from a small coastal town, two days after a powerful earthquake cut off train and vehicle access.

The magnitude 7.8 quake left two people dead, triggered a small tsunami, and brought down rocks and mud that swept across highways.

Air Commodore Darryn Webb, the acting commander of New Zealand’s Joint Forces, told The Associated Press that crews were loading about 380 people and three dogs onto a navy ship. He said the ship was due to leave Wednesday evening for a six-hour trip to a port near Christchurch.

Webb said it had evacuated another 340 people by helicopter since Tuesday.

Other tourists have left by chartering their own helicopters or having air transport provided by their embassy. Some have chosen to stay until an inland road reopens.

“I think it’s gone really well,” Webb said. “We were fortunate to have a reasonable break in the weather today.”

Webb said warships from Australia, Canada and the U.S. are due to arrive soon and would help restock the town with water, fuel and other supplies as well as transport equipment.

Flying over a large landslide in a helicopter, Prime Minister Key expressed surprise at the amount of debris.

“Look at this road here, this is really stuffed and there’s thousands of meters [yards] of it,” Key said. “I just don’t see how you can ever repair that bit of road. The whole mountain has moved over.”

Home to about 2,000 residents, Kaikoura was a popular destination for travelers wanting to go on whale-watching expeditions. On Wednesday, Key promised business owners the government would provide financial assistance for them through what was going to be a tough summer.

President-elect Donald Trump called Key on Wednesday to pass on his sympathies over the quake. Key’s office described the conversation as “very warm and cordial.” Trump had tried to get in touch earlier in the week but Key had missed the call in the confusion after the quake.

Authorities on Wednesday also managed to clear an emergency inland road to Kaikoura, although it was only open for military vehicles.

Neil Walker, the highways manager for the New Zealand Transport Agency, said the road remains high-risk and unsuitable for cars, although crews were working to open it to the public by the weekend.

In the capital, Wellington, several streets remained cordoned off after engineers determined that a nine-story office building was in danger of collapsing.

Brendan Nally, the regional commander for the New Zealand Fire Service, said engineers were completing an inspection of the building Tuesday when they found a major vertical beam had failed above the fifth floor.

Wellington Mayor Justin Lester told the AP that the building would likely have to be demolished. He said he didn’t believe it posed a risk to public safety because of the precautions authorities had taken in evacuating the area around it.