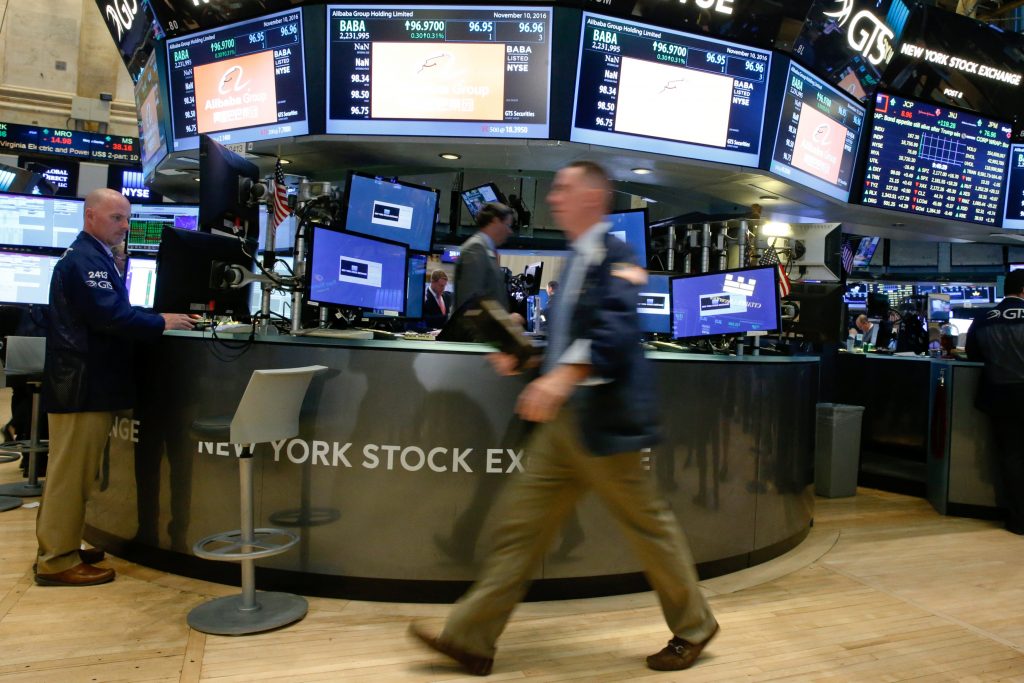 Stocks on major world markets gave back some of the week’s gains on Friday, while global bond yields rose for a fifth day, supporting the U.S. dollar but pressuring commodities and emerging markets.

Investors are anticipating that President-elect Trump’s policies will include lower tax rates and more infrastructure spending to grow the economy, but at the expense of a wider fiscal deficit and inflation.

Since the election, equity sectors that have benefited include banks and pharmaceuticals which may see less regulation under a Trump administration, while technology stocks are seen threatened by anti-trust policies and possible disruption of global supply chains posed by more protectionist trade policies.

The S&P financials stock index closed up 0.4 percent on Friday and up 11.3 percent for the week, the best weekly performance since May 2009.

The S&P healthcare stock index fell 1.5 percent on Friday but ended the week up 5.8 percent, its best week gain in over two years.

The Nasdaq biotechnology index fell 0.64 percent on Friday but ended the week up 10 percent, its best week since 2000.

“Wall Street is going to be watching a lot of (Trump’s) appointments and policy announcements to see whether it validates the more optimistic tone we’ve seen in the markets in the past few days,” said Alan Gayle, senior investment strategist and director of asset allocation at RidgeWorth Investments in Atlanta, Georgia.

“After panic buying, a more rational and selective phase has started,” said Giuseppe Sersale, fund manager at Anthilia Capital in Milan. “The political and economic obstacles to his plans must not be underestimated.”

The mining sector index fell 2.0 percent as investors took profits from a rally of more than 10 percent in basic resources stocks this week.

A sell-off in emerging markets hurt companies such as Standard Chartered and South African paper and packing maker Mondi, which dropped 6.3 percent and 4.7 percent respectively.

Global bond markets have seen the biggest loss of value this week since June 2013 when the Federal Reserve first discussed “tapering” its bond buying program.

In his first remarks since the election of Donald Trump as president, Fischer added that economic growth prospects appear strong enough for the Federal Reserve to proceed with a gradual increase in interest rates.

Against a basket of major currencies, the dollar firmed 0.28 percent on Friday and was up 2.0 percent for the week.

The Mexican peso slid on Friday to a record low of over 21 pesos per U.S. dollar before recovering some ground.

Trump has vowed to build a border wall between Mexico and the United States, deport millions of illegal immigrants, and threatened to rip up the North American Free Trade Agreement.

Both Brent crude oil and U.S. crude settled down more than 2.0 percent after OPEC said October output reached another record while Baker Hughes data showed U.S. oil drillers’ increased rigs this week for a 21th week in the last 24.

Copper pulled back after a sharp rally this week on expectations of an infrastructure boost from Trump’s policies. The metal was 0.9 percent lower at $5,549 a tonne but was still up more than 11 percent on the week, its best week in five years.

Gold dropped 2.8 percent to $1,224.76 an ounce after touching a session low of $1,219.40, the weakest since June 3, and was down more than 6.0 percent for the week, its worst week in 3-1/2 years as investors piled into industrial commodities seen benefiting from Trump’s promises of economic growth.