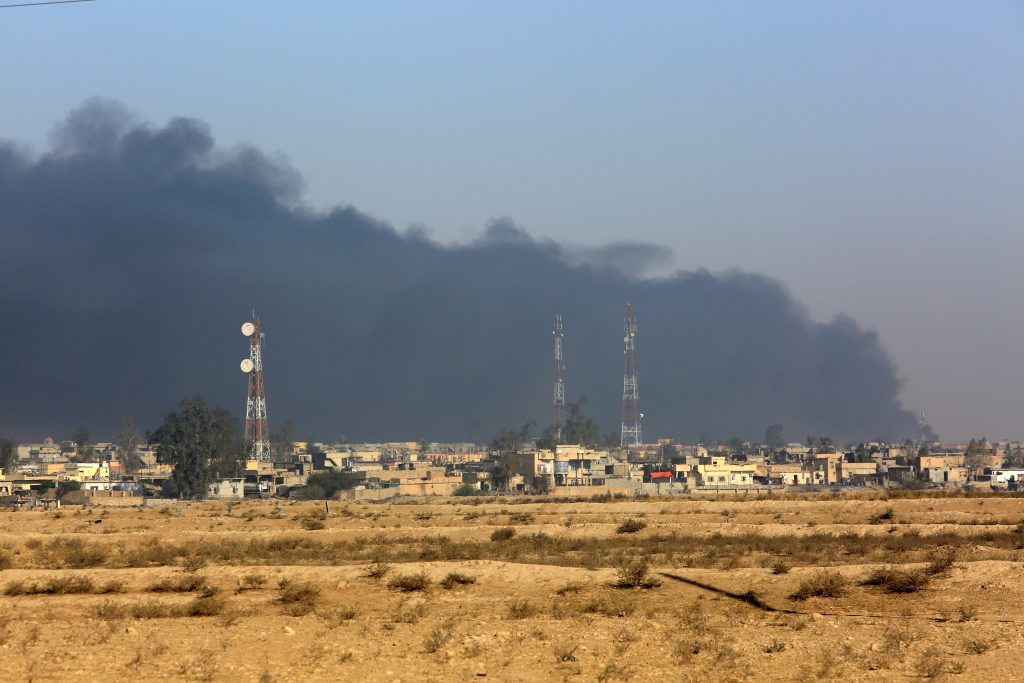 Iraqi special forces backed by U.S. and Iraqi air power took control of two districts of eastern Mosul on Saturday after heavy fighting in which they destroyed at least 10 cars deployed by Islamic State as suicide bombs, the military said.

Infantry and armored division troops also advanced in a nearby neighborhood, destroying three rocket launchers and killing 30 terrorists, it said in a statement.

Iraqi troops have been fighting for 10 days inside eastern Mosul, trying to expand their small foothold in the city which Islamic State has controlled since mid-2014, when its leader declared a caliphate in parts of Iraq and neighboring Syria.

The nearly four-week campaign to drive Islamic State out of the biggest city under its control in either country has brought together an alliance of 100,000 Iraqi fighters, also backed by thousands of Western personnel on the ground.

They have faced fierce resistance from a few thousand terrorists who have deployed hundreds of suicide car bombers and waves of attacks by snipers, assault fighters and rocket teams.

Lieutenant-General Abdul Wahab al-Saidi of the Counter Terrorism Service said his forces had completely taken over al-Arbajiya district and were halfway through clearing the adjacent al-Qadisiya al-Thaniya.

“We destroyed more than 10 suicide car bombs and killed snipers and weapons teams,” Saidi told Iraqi media. “The clearing is continuing and in the coming hours, G-d willing, this quarter will be completely cleared.”

Saidi said there were 50 districts in the eastern half of Mosul, which is divided by the Tigris river. Military reports suggest troops have controlled or entered less than a quarter of those. Several times they have lost territory overnight and had to fight to retake it.

Islamic State has used a network of tunnels around the city and merged into the civilian population of 1.5 million people still living there, helping it launch surprise raids and ambushes on the troops in areas they believed had been cleared.

“The biggest challenge, which is holding up the advance, is the presence of civilians … and their use as human shields by the terrorists,” Saidi said.

“There are Daesh (Islamic State) elements on the roofs while families are present on the ground floor – that means we have to find a way to deal with the Daesh forces on the roofs without damaging the house or the families.”

Sometimes, while troops are helping residents evacuate, “we notice a group of armed men among the civilians who open fire on the troops,” he added.

Further south, but still on the eastern fringes, troops from the First Infantry and Ninth Armored divisions attacked the jihadists in the Salam neighborhood, the military said.

Security forces and army troops are also advancing on southern and northern fronts close to the city, aiming to open new fronts inside Mosul to put further pressure on the ultra-hard-line Islamists.

The attacking forces include Iraqi army troops and special forces and federal police units. Outside the city, Kurdish peshmerga forces are holding territory to the northeast and mainly Shiite paramilitary forces are deployed to the west.

They are supported by U.S.-led air power, including jets and Apache helicopters, and Western military advisers who have accompanied Iraqi forces on the edge of Mosul.

The International Organisation for Migration says so far 49,000 people have been displaced by the conflict, the most complex military operation in more than a decade of turmoil since the 2003 U.S. invasion of Iraq which toppled Saddam Hussein.