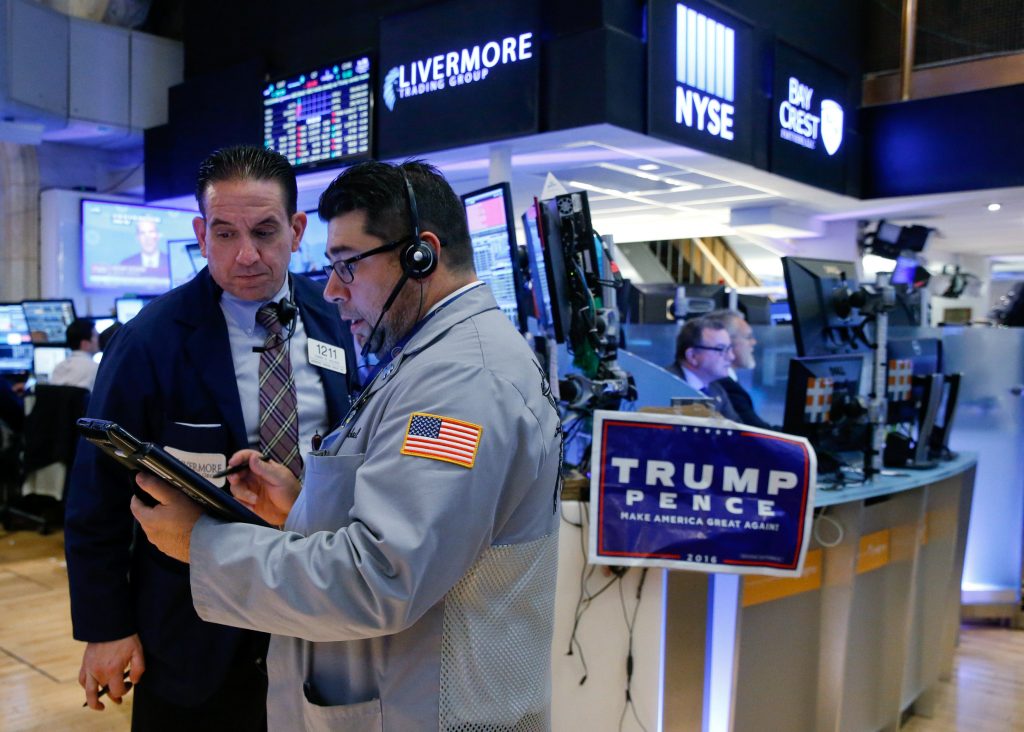 The solid gains marked a reversal from earlier in the day, when global stock markets were roiled after it became clear that Trump had sealed the win over Hillary Clinton.

Markets had been jittery in recent weeks over the prospect of a Trump administration. But conciliatory comments from the president-elect helped global stock markets recover a large chunk of their earlier losses.

Utilities were down the most, sliding 2.6 percent, followed closely by consumer-focused stocks. Crude oil prices headed higher after being down earlier in the day.

A sell-off in bonds sent prices tumbling, driving the yield on the 10-year Treasury note up to 2.04 percent from 1.86 percent late Tuesday, a large move. That’s the highest the rate has been since January. That rate is a benchmark used to set interest rates on many kinds of loans including home mortgages.

Traders are selling bonds to hedge against the possibility that interest rates, which have been ultra-low for years, could rise steadily again under a Trump administration, said Tom di Galoma, managing director of trading at Seaport Global Securities.

Though uncertainty remains over Trump’s trade, immigration and geopolitical policies and what his victory means for the future of globalization, investors appeared somewhat calmed by his victory speech, in which he praised Clinton and urged Americans to “come together as one united people” after a divisive campaign.

“While Trump slightly soothed some concerns in his victory speech, uncertainty remains over what kind of a U.S. he plans to lead,” said Craig Erlam, senior market analyst at OANDA.

HCA, the nation’s largest hospital chain, was down nearly 15 percent, while Pfizer climbed more than 7 percent, the biggest gain in the Dow. The biggest pharmacy benefits manager, Express Scripts Holding Co., was up more than 6 percent.

Firearm sales typically surge when a presidential candidate who favors an expansion of gun-control laws is elected. That’s not the case with Trump, however. That gave investors a reason to sell shares in firearm makers. Smith & Wesson slid 14.4 percent, while Sturm, Ruger & Co. fell 13.7 percent.

In Europe, Germany’s DAX was up 1.6 percent, while France’s CAC-40 gained 1.5 percent. The FTSE 100 index of leading British shares was 1 percent higher.

As Trump gained the lead in the electoral vote count, share prices tumbled in Asian markets, which were open as election results were tallied.

By the time Trump was confirmed the winner and made his speech, financial markets had steadied. The dollar also recouped some ground, while assets that many investors search out at times of uncertainty, such as gold, came off earlier highs.

One currency that remained heavily sold is the Mexican peso. It was down 8.4 percent as the prospect of a wall along the United States’ southern border, a key campaigning point for Trump, has come one step closer to reality. Trump has insisted that Mexico will pay for the wall. The U.S. currency rose sharply to 19.75 Mexican pesos from 18.68 pesos.

Also potentially impacting the peso is Trump’s threat to rip up trade deals like the North American Free Trade Agreement, a key plank in Mexico’s economic strategy and growth.

“If Trump is able to follow through with these suggestions, Mexican activity will suffer greatly,” said Jane Foley, senior foreign exchange strategist at Rabobank International.

Trump doesn’t formally take the reins of power until January but he will begin the transition to his presidency almost immediately. In the coming weeks, investors will be looking to see if he further tempers some of the rhetoric that polarized American opinion and often spooked investors in financial markets.

Another point of interest will center on the U.S.’s trade relations with China and its impact across Asia. Trump’s victory has raised concerns that the U.S. and China might embark on a trade war of sorts and that protectionism around the world will grow.