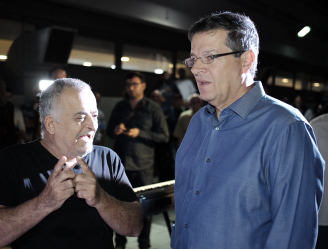 About 30,000 people gathered in Rabin Square in Tel Aviv to commemorate the 21st anniversary of the murder of former Prime Minister Yitzchak Rabin. The event was led by Zionist Camp head Yitzchak Herzog, whose party funded the event after a coalition of leftist groups that had sponsored the event in the past said that they would not be able to do so this year.

A hot topic among speakers at the event were comments made over the weekend by MK David Bitan, the head of the coalition, who said that the murder of Rabin was “not politically motivated. He was not murdered by politicians.” Bitan was asked if he planned to participate in the commemorative event, and said that he would not. “An event to commemorate the murder of Rabin must be an official, respectful event, and funded by the government, not a political party.”

Bitan was slammed roundly by leftist politicians for his comments. “These ridiculous comments are just an attempt to rewrite history,” said MK Itzik Shmuely (Zionist Camp). “Rabin was murdered by an evil person who sought to choke off a political path that sought compromise and a new path. If MK Bitan needs a reminder of who stood in the square and hyped up the crowd and eventually led to the murder, we can send him photos that will clarify that this was a politically motivated murder.”

According to MK Chilik Bar (Zionist Camp), “there was a steady stream of incitement before the murder, persecution by the far right, name-calling, and the same hatred, incitement and targeting we see today against journalists, judges, IDF officers, and anyone else who thinks differently from the government.”

Rabin was killed on November 4, 1995, and every year since then, a memorial event has been held on the Motzoei Shabbos closest to that date. The events have been organized by a coalition of groups which funded them, but this year the coalition decided to dispense with a single major event, instead sufficing with parlor meetings. The Tel Aviv event is privately funded, as distinguished from the official government-sponsored memorial event, which is set to take place on November 13. Zionist Camp announced last week that it would sponsor the event.