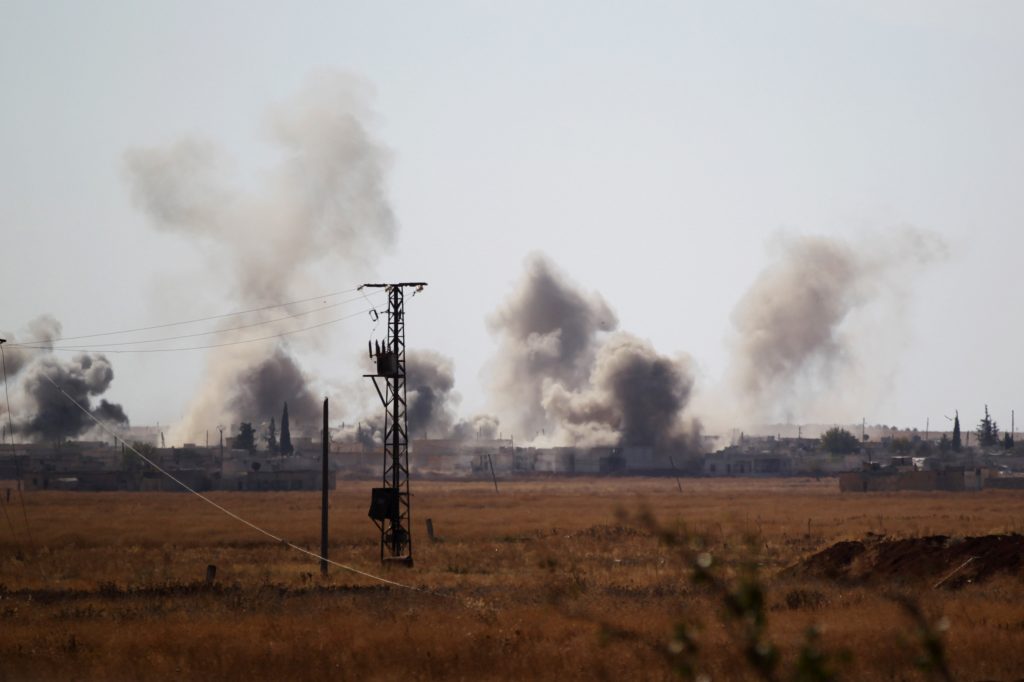 Fierce fighting and airstrikes broke the third day of a four-day unilateral Russian ceasefire in the divided Syrian city of Aleppo on Saturday, a monitor said.

The first Syrian or Russian airstrikes on Aleppo since Russia began the pause in hostilities on Thursday hit a key front line in the city’s southwest, the Syrian Observatory for Human Rights said.

Clashes and shelling which had continued throughout the day on front lines intensified late in the day, a witness and the Observatory said.

Airstrikes had continued to target areas outside the city throughout the ceasefire.

Russia has been announcing daily that it will abide by the next day of the series of daytime ceasefires, which it said it called to allow civilians and terrorists to leave the besieged city, but no announcement was made on Saturday.

There have been night-time clashes as each day of the ceasefire has ended, but Saturday saw much fiercer fighting plus the first airstrikes.

Aleppo was Syria’s most populous city before the war, but is now divided into government- and rebel-held areas. Intense bombardment has reduced the rebel-held east of the city to ruins.

Once again, no medical evacuations or aid deliveries to rebel-held areas were possible on Saturday, the United Nations said.

Rebels did not accept the ceasefire, which they say does nothing to alleviate the situation of those who choose to remain in rebel-held eastern Aleppo, and believe it is part of a government policy to purge cities of political opponents.

The Syrian army and Russia had called on residents and rebels in eastern Aleppo to leave through designated corridors and depart for other insurgent-held districts under a promise of safe travel, but very few rebels or civilians appeared to have left.

“Nobody has left through the corridors. The small number of people which who tried to leave were faced with shelling around the (corridor area) and could not leave,” said Zakaria Malahifji, a rebel official with the Fastaqim group, which is present in the city.

Syrian state media says rebels have been preventing civilians from leaving east Aleppo. Pro-government channels broadcast footage of ambulances and green buses parked at empty reception points in government-held Aleppo, said to be waiting for civilians and fighters from the city’s east.

Besieged east Aleppo has not received United Nations assistance since early July and rebel groups have said they are preparing an attack to try to break through the government siege.

The United Nations had hoped that the ceasefires would allow medical evacuations and aid deliveries, but said a lack of security guarantees had prevented aid workers from taking advantage of the pause in bombing.

“The U.N. remains hopeful that parties will provide all necessary guarantees and is actively working to that end,” U.N. humanitarian spokesman Jens Laerke said. He said humanitarian workers were ready to proceed as soon as conditions allowed.

“The situation on the ground remains volatile as exchanges of fire and clashes continue. Just today bullets struck the hotel where the U.N. hub is based and critically injured one hotel staff,” Laerke said.

Sporadic clashes between terrorists and Syrian government and allied forces had been reported earlier on Saturday along frontlines, with some shells falling on both the government-held western side of the city and the rebel-held east, the Observatory said.

Aleppo has been a major battleground in the Syrian conflict, now in its sixth year. Syrian President Bashar al-Assad, backed by the Russian military, Iran’s Revolutionary Guards and an array of Shiite Muslim militias, wants to take full control of the city.

Syrian and Russian forces say they are targeting fighters linked to al-Qaida from Jabhat Fateh al-Sham, formerly known as the Nusra Front, in eastern Aleppo. Terrorists say Syria and Russia are indiscriminately targeting civilians and civilian infrastructure to take over rebel-held eastern Aleppo.

Diplomatic negotiations between Russia and the United States have in recent weeks focused on whether there is a way to separate al-Qaida-linked terrorists in eastern Aleppo from more moderate rebels, thereby depriving Syrian and Russian forces of their main targets.

Kremlin spokesman Dmitry Peskov said on Saturday Russia remains committed to removing what it calls terrorist organisations from Syria and preventing the disintegration of the country.

“We need to liberate and do everything possible to prevent the division of the country,” Peskov said in an interview, adding that he did not see an end to the Syria conflict in the foreseeable future.

Asked if further extensions of the Aleppo pause were under discussion, Russian Deputy Foreign Minister Sergei Ryabkov was quoted by RIA news agency earlier on Saturday as saying it depends on the actions of other parties.

“We’ll see how today goes. At the highest level it’s already been said that (extending the pause) depends not on our possibilities but it largely depends on whether there is a proper movement from the opposite direction,” he said.