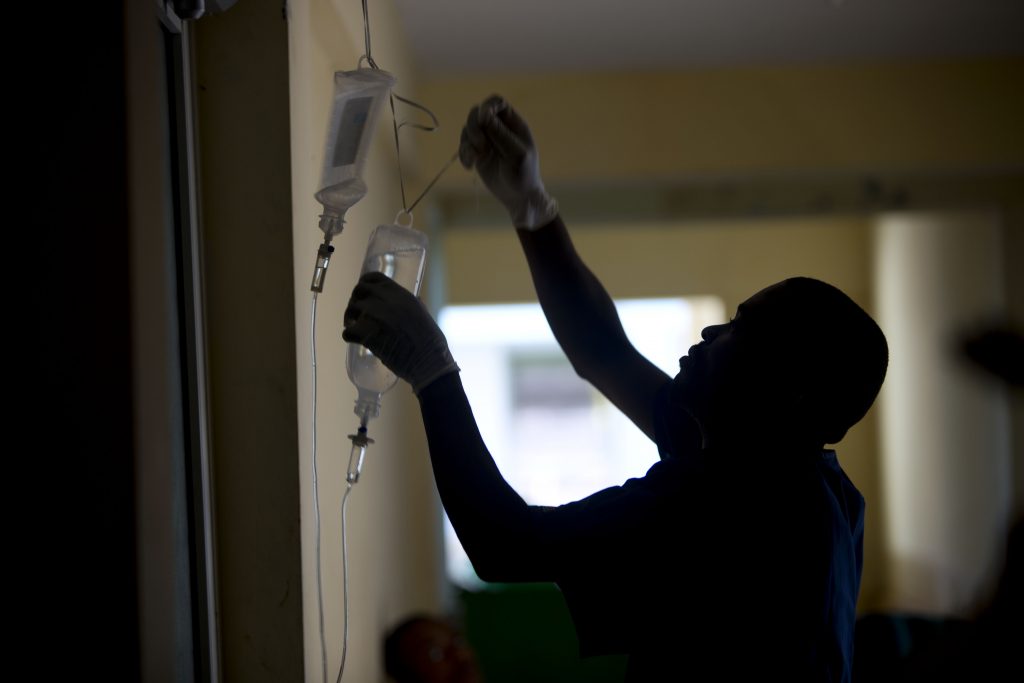 Hurricane Matthew first took the home of Sonette Crownal in a town on Haiti’s southern coast. Then cholera came for her baby.

The 25-year-old market vendor and her family were still taking stock of their losses after the storm when she noticed that Peter James, just 10 months old, was showing symptoms of a disease that health authorities say is surging in the wake of the storm.

“When I saw the symptoms and knew what was really going on, then I got scared,” Crownal said as she cradled the boy in her arms at a Les Cayes cholera treatment center on Tuesday. About 20 people, some still listless from the disease, lay on cots under a metal roof as a fan cooled the tropical heat.

Cholera is caused by bacteria that produce severe diarrhea and is contracted by drinking contaminated water or eating contaminated food. It can lead to a rapid, agonizing death through complete dehydration, but is easily treatable if caught in time.

The Category 4 storm that hit on Oct. 4 has killed at least 473 people, according to national emergency officials, and the wreckage it left behind has created the perfect conditions for spreading the water-borne disease. Matthew sent rivers and outdoor latrines overflowing across the mountainous landscape. Cholera-contaminated water has leeched into people’s drinking wells, those that weren’t ruined by Matthew’s storm surge.

Many thousands of people whose homes were ruined are sharing close quarters with family and friends, the kind of proximity amid poor sanitation that aids in transmission. Already reports have been trickling in that the disease is spiking.

The World Health Organization says at least 200 suspected cholera cases have been reported across southwest Haiti since Matthew hit and it has pledged to send 1 million doses of cholera vaccine to Haiti.

“It is not looking good,” said Dr. Unni Krishnan, director of Save the Children’s Emergency Health Unit in Haiti. “We should act very quickly to contain this, otherwise it could get out of control.”

And cholera is not the only health emergency in the country. Krishnan and others warn about growing malnutrition because of widespread damage to crops and livestock, as well as fishing boats and gear, depriving many of their livelihoods in a country where more than half survive on less than $2 a day.

Also complicating matters are shortages in hospitals and clinics ill-equipped to respond to the spike in cases. Many people in remote communities have trouble reaching treatment. Crownal said she had to walk for hours from her home in Randell, a town outside of Les Cayes, before she could find a bus to take her the rest of the way for treatment for her baby.

Doctors Without Borders opened a cholera treatment center in Port-a-Piment. As of Tuesday, medical staff had already cared for 87 patients. Paul Brockmann, director of the organization’s mission in Haiti, said the looming wet season may make it worse still.

“The hurricane affected a population who was already in fragile health, and it has made their condition worse,” he said. “There is a very long stretch of densely populated coastline which is at risk.”

Cholera was unknown in Haiti until the fall of 2010. The disease was apparently introduced by U.N. peacekeepers from Nepal, part of a contingent of troops who had been rotating through the troubled country since 2004. They improperly disposed of waste from their base in the central plateau and it quickly spread through the network of rivers that people rely on to bathe, wash clothing and for drinking water. Since then, cholera has killed roughly 10,000 people and sickened more than 800,000 in this country.

Haiti and international organizations have developed a network of treatment centers that allow people like Peter James to be spared an excruciating death. The baby was getting intravenous fluids through his hand and was slowly coming around two days after his mother brought him to the ward.

Her baby recovering, Crownal is struggling to pick up the pieces of her life like many people in southwest Haiti.

“I’m proud to be a Haitian, but everything is gone here,” she said.

Another seaside community, Anse-d’Hainault on Haiti’s western tip, appeared to be even harder hit: Ninety-two cholera cases had been recorded by Monday, and the number keeps growing.

“Our cholera treatment center was only built for 12 people, and now we’re being overrun,” said Cadet Jean Arthur, the hospital’s administrator.

In the district of Anse d’Hainault, which includes the village of the same name, as many as 50 people have already died of cholera since the hurricane, most far from any hospital, said Mayor Georges Simon.

Most of his town’s houses were flattened. Children scrambled around piles of trash in a landscape of splintered wood, twisted metal and puddles of fetid water.

Outside the town’s only public hospital, Civil Protection official Joseph Roby handed out water purifying tablets and he warned that cases would only increase.

“People were drinking water wherever they could find it,” he said.

A visibly exasperated Mirve Luma, whose father and a cousin were being treated for cholera, grabbed a mop and bucket of soapy water from an idle hospital attendant and began to clean the floor of the packed ward.

“More people are going to get sick if you don’t clean up this place,” she hissed at the attendant.

Nearby, a man picked up soiled clothes with a stick and threw them into a pile to burn, helping hospital staff clean the area in exchange for free meals.

Two-year-old Dabens Desrosiers was receiving rehydration fluid from an IV, and weary of it.

“Daddy, take me home,” he repeatedly murmured to his father, 31-year-old Gerson Desrosiers.

After three days of treatment, the boy was about to be discharged, but there was no home to return to. The family’s shack was flattened by the hurricane.

Sandra Honore, the U.N. envoy for Haiti, said the health impact of Matthew cannot be overestimated and warned that the country is facing “a humanitarian tragedy and an acute emergency situation.” She said the U.N. is providing water purification systems and medicine to hard-to-reach areas, and she urged people everywhere to contribute to the $120 million U.N. appeal to help hurricane victims.

But a growing number of Haitians were becoming frustrated by such statements as they noted that aid still hasn’t arrived in many remote communities a week after the storm hit.

Guideline Joseph sucked her teeth with disdain as she and others huddled in a tavern serving as a makeshift shelter while they watched a state tv broadcast talking about government efforts to help hard-hit areas.

“It’s awful here and cholera is killing people, but they are talking about progress on [media],” she said. “Who knows? Maybe by the time they reach here, there will be nobody left.”