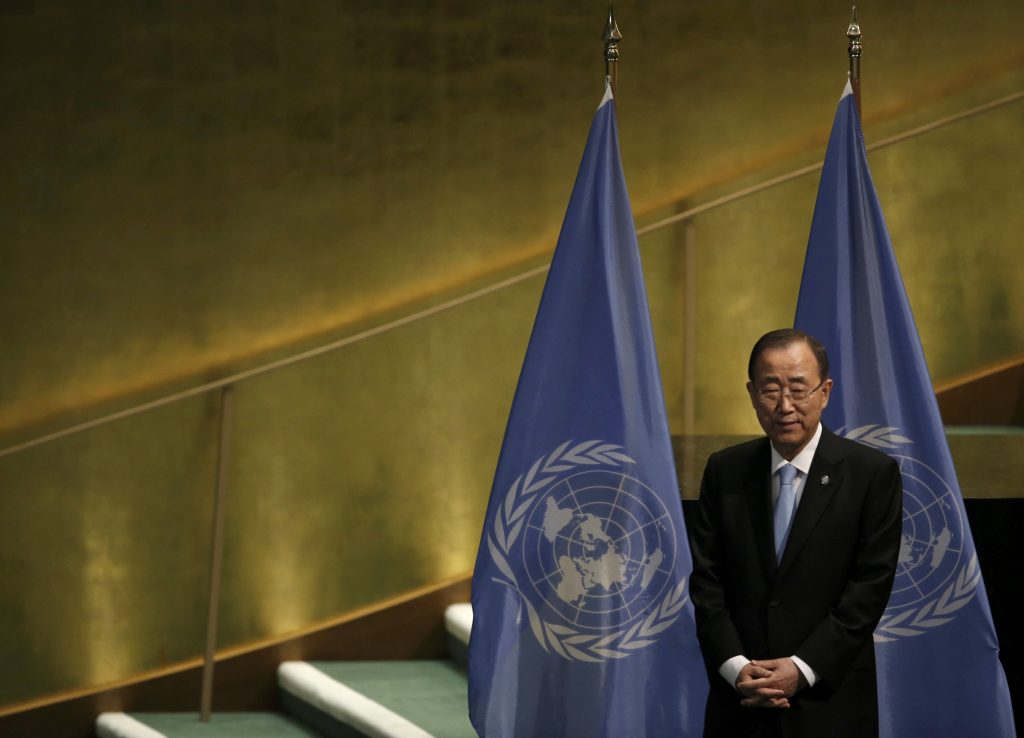 World leaders from Pakistan to Ukraine unleashed their regional grievances Wednesday, taking the stage of the U.N. General Assembly to rage against their neighbors and presenting a picture of a chaotic world consumed by intractable conflicts.

A few paces from the General Assembly hall, the United States and Russia bitterly attacked each other during a Security Council meeting meant to salvage Syria’s faltering cease-fire. Secretary-General Ban Ki-moon implored Syria’s warring parties to lay down their arms.

In the midst of the anger, a few bright spots emerged on the second day of the annual U.N. gathering of heads of states. Colombia basked in world praise when it presented to the Security Council its newly reached peace agreement with leftist rebels. Former political prisoner Aung San Suu Kyi made her first General Assembly speech since she formed a democratically elected government in Myanmar.

But on the International Day of Peace, tensions from all parts of the planet filled the halls of the United Nations.

Japanese Prime Minister Shinzo Abe devoted about half of his address to North Korea, which earlier this month conducted its fifth nuclear test in defiance of repeated Security Council resolutions intended to constrain its weapons development.

Abe said North Korea this year fired three missiles into Japan’s exclusive economic zone and it was a matter of luck that no ships or aircraft were damaged. He urged unity in the Security Council to confront the North Korean threat.

“We must concentrate our strengths and thwart North Korea’s plans,” Abe said.

Some of the angriest words came from the rivalries between Pakistan, Afghanistan and India.

Pakistani Prime Minister Nawaz Sharif delivered a blistering attack on neighboring India while, across the world, gunbattles raged for a second day between Indian soldiers and suspected rebels in the disputed territory of Kashmir.

Sharif demanded a U.N. investigation against “brutalities perpetrated by the Indian occupying forces,” saying “innocent Kashmiri children, women and men” have been killed, blinded and injured.

Vice President Sarwar Danesh said “merciless attacks from terrorist groups” against its civilians are being planned and organized on Pakistani territory. He said Afghanistan has repeatedly asked Pakistan to destroy known terrorist safe havens but there has been no change in the situation.

Sharif shot back that Pakistan has suffered from spillover of Afghanistan’s internal conflicts for more than three decades and “progress will be assured only when the Afghan parties themselves conclude that there is no military solution to the Afghan war.”

There was positive news in Ukraine, where the government and separatist rebels agreed Wednesday to pull back troops and weapons from several areas in eastern Ukraine in an attempt to uphold a fragile peace agreement reached last year.

But at the United Nations, Ukrainian President Petro Poroshenko lambasted Russia for being “the instigator and major participant” in the conflict in eastern Ukraine.

“The terrorist component of the undeclared hybrid war that Russia wages against Ukraine is evident,” Poroshenko said.

Respite from the invective came from Colombia, which appeared at the annual U.N. gathering as a country in peace for the first time in five decades.

Colombian President Juan Manuel Santos devoted almost his entire speech to the peace deal reached with the Revolutionary Armed Forces of Colombia, which will be signed in Cartagena later this month and must be submitted to a national referendum on Oct. 2.

“A new Colombia greets the international community today,” Santos said. “A Colombia full of hope. A Colombia that, without a war, is ready to reach its highest potential and to be a positive factor in the global context.”

He later met with President Barack Obama, who praised the peace accord as an “achievement of historic proportions.”

Ban commended Santos for his “vision and determination.”

“In a time of armed conflicts in many other paces, peace in Colombia sends a powerful message of hope in the world,” Ban said.