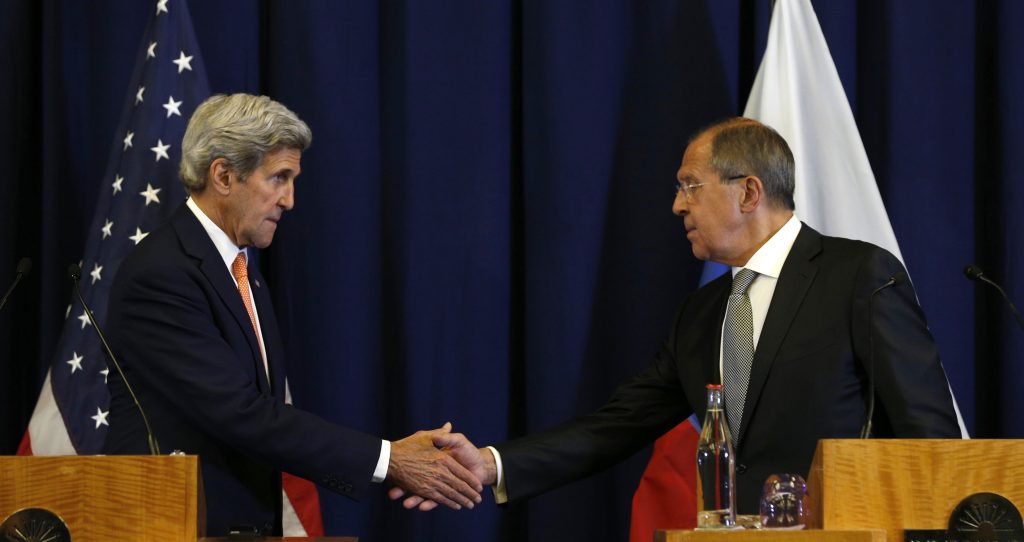 The United States and Russia working in lockstep against the Islamic State terror group and al-Qaida’s affiliate in Syria. A rejuvenated truce that will compel President Bashar Assad’s air and ground forces to pull back. New flows of badly needed humanitarian aid.

The potential breakthrough deal, which launches a nationwide cessation of hostilities by sundown Monday, will hinge on compliance by Assad’s Russian-backed forces and U.S.-supported rebel groups, plus key regional powers such as Turkey, Iran and Saudi Arabia with hands directly or indirectly in Syria’s 5-½ years of carnage.

“We believe the plan as it is set forth — if implemented, if followed — has the ability to provide a turning point, a moment of change,” Kerry said as he and Lavrov laid out the contours, but admittedly not too much fine print, of the hard-won accord.

The ultimate hope is to silence the Syrian guns so that the long-stalled peace process under U.N. mediation can resume between Assad’s envoys and representatives of the opposition, while the two world powers focus on battling jihadis.

The deal, at least publicly and for now, appears to overcome months of distrust between Russia and the United States that President Barack Obama had cited less than a week ago.

Now, the two powers are lining up in an unexpected new military partnership targeting IS and al-Qaida-linked terrorists, while trying to prod Assad and opposition groups to end a civil war that has killed up to 500,000 people and displaced millions.

“This is just the beginning of our new relations,” Lavrov said of the U.S.

Washington must persuade Syrian rebels to break ranks with Fath al-Sham, an al-Qaida-linked terror group previously known as the Nusra Front, which has intermingled with U.S.-backed fighters. Moscow is to pressure Assad’s government to halt all offensive operations against the armed opposition in specific areas, which were not detailed.

“The Syrian government has been informed of these arrangements and is ready to fulfill them,” Lavrov said at a news conference alongside Kerry after midnight.

Kerry said the arrangement depends on “people’s choices. It has the ability to stick, provided the regime and the opposition both meet their obligations, which we — and we expect other supporting countries — will strongly encourage them to do.”

He also alluded to the possibility of backsliding that all but doomed a previous U.S.-Russia cease-fire initiative earlier this year, which briefly halted the fighting and paved the way for new aid convoys before a resurgence of bloodshed.

“No one is building this based on trust,” Kerry said. “It is based on a way of providing oversight, and compliance, through mutual interest and other things. If this arrangement holds, then we will see a significant reduction in violence across Syria.”

The deal culminates months of frenetic diplomacy that included four meetings between Kerry and Lavrov since Aug. 26, and a lengthy face-to-face meeting in China between Obama and Russian President Vladimir Putin.

The military deal would go into effect after both sides abide by the truce for a week and allow unimpeded humanitarian deliveries. Then, the U.S. and Russia would begin intelligence sharing and targeting coordination, while Assad’s air and ground forces would no longer be permitted to target Fath al-Sham; they would be restricted to operations against the Islamic State.

The arrangement would ultimately aim to step up and concentrate the firepower of two of the world’s most powerful militaries against IS and the group once known as Nusra, both listed by the United Nations as terrorist groups.

Both sides have failed to deliver their ends of the bargain over several previous truces.

But the new arrangement goes further by promising a new U.S.-Russian counterterrorism alliance, only a year after Obama chastised Putin for a military intervention that U.S. officials said was mainly designed to keep Assad in power and target more moderate anti-Assad forces.

Russia, in response, has chafed at America’s financial and military assistance to groups that have intermingled with the Nusra Front on the battlefield. Kerry said it would be “wise” for opposition forces to separate completely from Nusra, a statement Lavrov hailed.

“Going after Nusra is not a concession to anybody,” Kerry said. “It is profoundly in the interests of the United States.”

After the Geneva announcement, Pentagon secretary Peter Cook offered a guarded endorsement of the arrangement and cautioned, “We will be watching closely the implementation of this understanding in the days ahead.”

At one point, Lavrov said he was considering “calling it a day” on talks, expressing frustration with what he described as an hours-long wait for a U.S. response. He then presented journalists with several boxes of pizza, saying, “This is from the U.S. delegation,” and two bottles of vodka, adding, “This is from the Russian delegation.”

The Geneva negotiating session, which lasted more than 13 hours, underscored the complexity of a conflict that includes myriad terror groups, shifting alliances and the rival interests of the U.S. and Russia, Saudi Arabia and Iran, and Turkey and the Kurds.

Getting Assad’s government and rebel groups to comply with the deal may now be more difficult as fighting rages around Aleppo, Syria’s most populous city and the new focus of the war.

Assad’s government appeared to tighten its siege of the former Syrian commercial hub in the last several days, seizing several key transit points. Forty days of fighting in Aleppo has killed nearly 700 civilians, including 160 children, according to a Syrian human rights group.

Kerry outlined several steps the government and rebels would have to take. They must now pull back from demilitarized zones, and allow civilian traffic and humanitarian deliveries — notably into Aleppo.

But as with previous blueprints for peace, Saturday’s plan appears to lack enforcement mechanisms. Russia could, in theory, threaten to act against rebel groups that break the deal. But if Assad bombs his opponents, the U.S. is unlikely to take any action against him, given Obama’s long-standing opposition to entering the civil war.

In the Mideast, the main Syrian opposition umbrella group said it hoped the new U.S.-Russian agreement would be enforced in order to ease the suffering of civilians. Basma Kodmani, of the High Negotiations Committee, told The Associated Press that Russia should pressure Assad to abide by the deal, adding that  enforcement mechanisms will be needed, including the “cessation of hostilities and the grounding [of] regime air forces.”