World Turkey: IS Has Lost All Territory Along Syria-Turkey Border
World 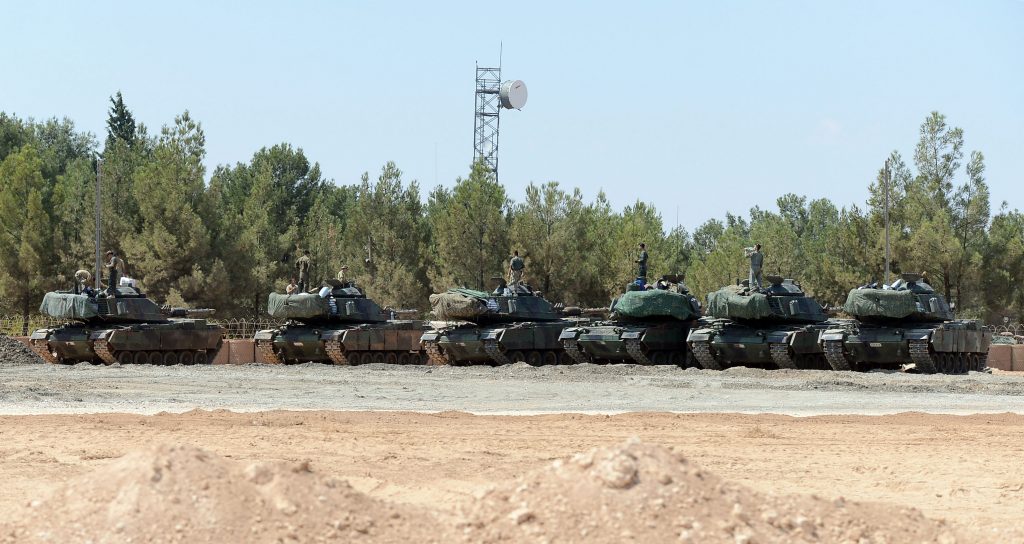 Turkish troops and allied Syrian rebels expelled the Islamic State group from the last strip of territory it controlled along the Syrian-Turkish border on Sunday, effectively sealing the terrorists’ self-styled caliphate off from the outside world, Turkey’s state-run news agency reported.

Turkey-backed Free Syrian Army rebels have cleared the area between the northern Syrian border towns of Azaz and Jarablus, the Anadolu news agency reported. It said the advance “has removed terror organization Daesh’s physical contact with the Turkish border in northern Syria.” Daesh is an Arabic acronym for the Islamic State group.

The FSA’s advance shut down key supply lines used by IS to bring in foreign fighters, weapons and ammunition.

Meanwhile, the recapture and return to siege of rebel-held parts of Aleppo dealt a major blow to insurgent groups. They have lost scores of fighters in recent weeks in the battle to open a corridor into the city and lift the government’s blockade.

After the government laid siege on Aleppo for the first time in July, the United Nations said that nearly 300,000 residents were trapped in rebel-held neighborhoods, making it the largest besieged area in war-torn Syria. The city has been contested since the summer of 2012.

Sunday’s push follows a month after insurgents captured several military academies south of Aleppo and opened a corridor into opposition-held parts of Syria’s largest city and onetime commercial center. Since then, government forces and their allies have been trying to recapture the area.

State media quoted an unnamed military official as saying that troops are now in full control of the military academies south of Aleppo and are “chasing the remnant of terrorists.” It added that all roads linking rebel-held eastern Aleppo with opposition areas outside the city “have been cut.”

“The [rebel-held] neighborhoods are under siege again,” said the Observatory’s chief, Rami Abdurrahman, by telephone. “The whole areas are under complete siege.”

Turkey has launched two incursions into Syria since Aug. 24 in an operation designed to drive IS away from the border and prevent the advance of U.S.-backed Kurdish forces, which are also battling the terrorist group.

“We are there to protect our borders, ensure the safety of our citizens’ lives and property, and to protect the territorial integrity of Syria,” Yildirim said during a visit to the southeastern city of Diyarbakir.

“We will never allow an artificial state in Syria’s north,” he said, apparently referring to U.S.-backed Kurdish forces, who have taken a large swath of territory from IS along the border. Turkey views the Kurds as a threat and the Turkey-backed forces have clashed with them outside Jarablus.

In a press statement late Saturday, Turkey’s military said the FSA took control of 10 villages from IS, adding that the Turkish army struck 20 IS targets. Since the Turkish operation began on Aug. 24, the army says it has hit 300 targets with 1,306 rounds.