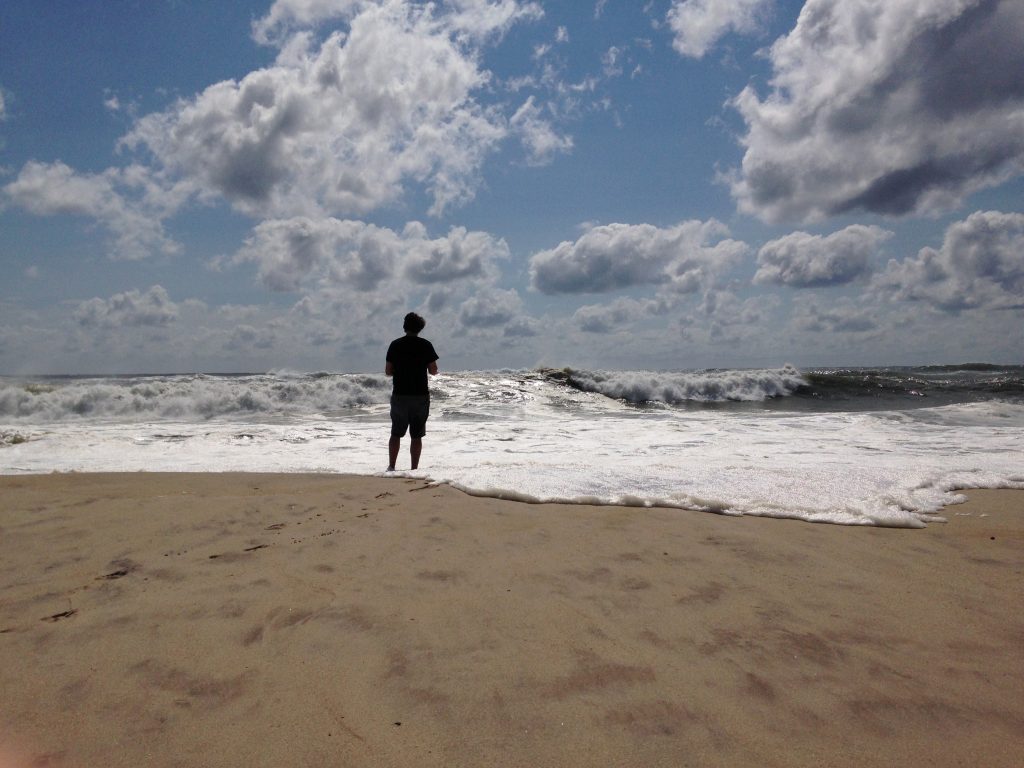 Hermine continued Monday to twist hundreds of miles off shore in the Atlantic Ocean and was expected to keep swimmers and surfers out of beach waters because of its dangerous waves and rip currents on the last day of the long holiday weekend.

“We’re not looking at a landfall,” said Dennis Feltgen of the National Hurricane Center on Sunday, adding Hermine is just sitting and pushing the water up along the coast making storm surge a great concern.

It was expected to stall over the water before weakening again.

Governors all along the Eastern Seaboard announced emergency preparations. A tropical storm warning was in effect from New York’s Long Island to Massachusetts.

Tropical storm-force winds were possible Monday in New Jersey. Gov. Chris Christie warned that minor to moderate flooding was still likely in coastal areas and said the storm will cause major problems, even as it tracks away from land.

On the Virginia Beach boardwalk, the Atlantic Ocean roared with uncharacteristically large waves, drawing only a couple of surfers into the choppy white water. But hundreds, if not thousands of people, had descended onto the beach for the traditional last weekend of summer. Umbrellas and canopies dotted the sand under partly sunny skies.

New York City planned to close its beaches Monday because of rip currents, and the ban could extend into Tuesday, depending on weather conditions, officials said.

Long Island authorities urged people to evacuate the summer getaway known as Fire Island to avoid any storm surge and coastal flooding. Emergency officials warned that anyone who stayed would not be able to leave after ferries shut down Sunday evening.

Hermine rose up over the Gulf of Mexico and hit Florida on Friday as a Category 1 hurricane before weakening to a tropical storm across Georgia.

It has caused two deaths, inflicted widespread property damage and knocked out power to hundreds of thousands of people from Florida to Virginia.

As of 5 a.m. EDT Monday, Hermine’s top sustained winds were steady at 70 mph as it moved north at 3 mph. The storm was centered about 305 miles southeast of the eastern tip of Long Island.

Since sea levels have risen up to a foot due to global warming, the storm surges pushed by Hermine could be even more damaging, climate scientists say.

“We are already experiencing more and more flooding due to climate change in every storm,” said Michael Oppenheimer, a geosciences professor at Princeton University. “And it’s only the beginning.”

On Saturday, high winds tipped over an 18-wheeler, killing its driver and shutting down the U.S. 64 bridge in North Carolina’s Outer Banks.

Earlier in Florida, a homeless man died from a falling tree.

New York City will experience some wind over the next few days, but no rain at all is expected throughout the week, according to weather.com.

Winds will be in the mid-to-upper-teens miles per hour from Sunday afternoon until early Monday morning; in the low 20s mph from Monday morning until Monday evening; and then in the upper teens mph until Tuesday afternoon, according to weather.com.

But New York City Mayor Bill de Blasio warned, in a press release Sunday, that wind gusts may be stronger, particularly at high-elevation areas, such bridges and high-rise buildings.

In a press release Sunday evening, New York Gov. Andrew Cuomo said that wind gusts in NYC on Monday and Tuesday are forecast to reach as high as 30-40 mph, and on Long Island 45-55 mph.