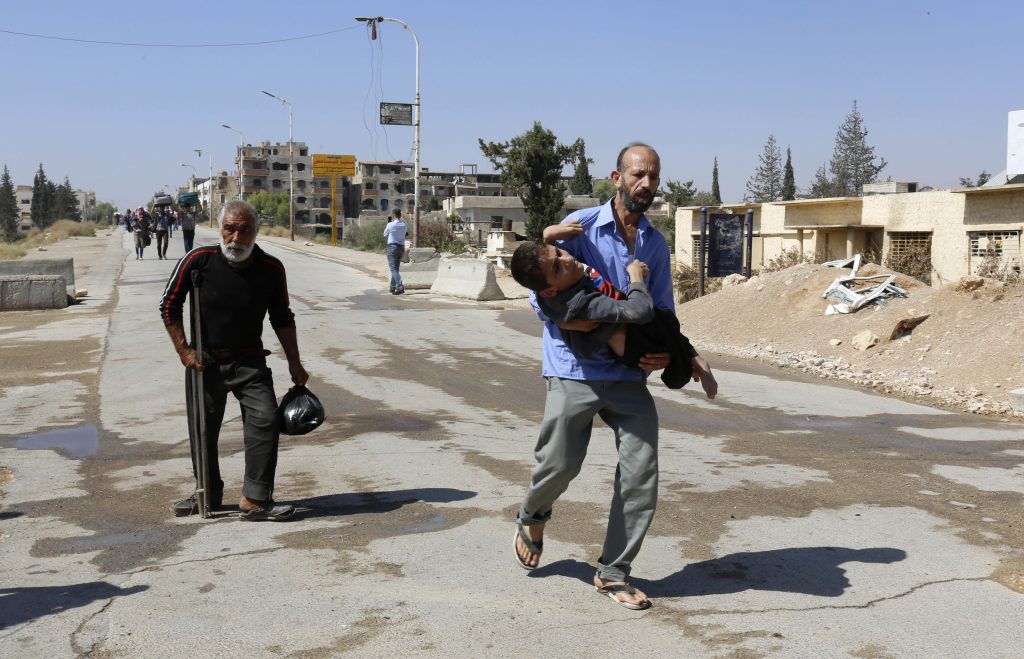 More than 300 Syrians were bused out of a rebel-held suburb of the capital, Damascus, in an evacuation Friday, under a deal struck with the government that ends a punishing three-year-long siege, allows rebel fighters to leave and restores state control over the area.

The suburb of Moadamiyeh is the latest opposition pocket to relent after residents could no longer take the suffering under sieges by Syria’s military, with food supplies dwindling and key infrastructure like hospitals being destroyed. A nearby suburb, Daraya, surrendered and came under government control last week.

The accelerating pace of such surrenders points to the success of the military’s tactic of sieges, even as it has brought international criticism and frequent complaints from the U.N. over the difficulty of getting humanitarian aid to besieged residents.

An Associated Press reporter in Moadamiyeh saw security forces searching the luggage of dozens of men, women and children before they boarded buses Friday, heading out of the suburb to shelters in a government-controlled neighborhood nearby.

The siege of Moadamiyeh, which a U.N. report said was gassed with toxic sarin in 2013, has left its estimated 28,000 residents with dwindling food and medical supplies.

The first part of the deal’s implementation evacuated about 340 people, including 62 gunmen who agreed to lay down their arms after taking advantage of a presidential amnesty, said the governor of Rural Damascus province, Alaa Munir Ibrahim.

Aside from the gunmen, the evacuees are all residents of the nearby suburb of Daraya who had been trapped in Moadamiyeh when the military launched a major offensive on Daraya earlier this year.

Once their evacuation to government-controlled areas is complete, the rebel gunmen in Moadamiyeh who refuse to hand over their weapons will leave, likely to rebel-held parts of northern Syria. The rest of the suburb’s population will remain.

It was not clear when government security forces would take over control of the suburb.

Moadamiyeh’s fall was a direct result of the collapse of resistance in Daraya, which had been under siege since 2012. Battered by the offensive launched this year, Daraya’s residents finally reached a deal with the government, and last week the entire remaining population of the suburb – about 4,000 people out of an original 200,000 – was removed, drawing criticism that it was a forced displacement.

The offensive also cut off other rebel-held areas like Moadamiyah.

“The heroic acts of the Syrian army in Daraya led to the achievement in Moadamiyeh,” Ibrahim, the provincial governor, told Syrian state media.

He said other “settlement” deals with rebel-held Damascus suburbs were currently under discussion, and urged other gunmen to lay down their arms.

Since early on in the 5 ½-year civil war, many of the towns and suburbs in the rural areas surrounding Damascus joined the opposition. But now rebel-held territory has been reduced to pockets, with the largest pocket east of the capital now a main target for sieges.

At a press conference in Geneva on Thursday, U.N. Syria envoy Staffan de Mistura warned that the government’s siege tactics were forcing evacuations, saying that “after Daraya, we may have other Darayas.”

De Mistura’s humanitarian adviser, Jan Egeland, echoed his sentiment, saying the U.N. humanitarian task force for Syria had “failed the people of Daraya.” The U.N. underlined that it had not been consulted on the Daraya deal, which it described as forced displacement.

Moadamiyeh’s buildings and infrastructure appeared largely intact. Local rebels had negotiated several local truces with the government starting 2012, and the suburb was spared much of the destruction and bombing that beset Daraya, a mile away.

“I am very happy to get out,” said 25-year old Samira Khadra, a resident of Daraya who had moved to Moadamiyeh, as she boarded one of eight waiting green buses with her mother and children.

Rajab Taysir al-Sheikh, a 55-year old resident of Daraya, said his former home was totally destroyed. He was now joining his family, evacuated last week from Daraya, in a shelter in a Damascus suburb.

“Nothing remains from my house except what I am carrying: two pants and some shirts,” he said.

Hassan Ghandour, a former resident of Moadamiyeh and a lead negotiator on the deal, said most gunmen who are originally from Moadamiyeh will likely lay down their weapons and stay in the suburb. He said Daraya residents residing in Moadamiyeh are around 2,500 and will likely leave over the coming days. The deal also includes the release of detainees from Moadamiyeh currently held in government prisons.

Also Friday, Turkish forces fired tear gas and water cannons across the border at some 400 protesters in the Syrian town of Kobani, who were demonstrating against a barrier wall being built by Turkey. Delkhwaz Khalil, a Kurdish official in the semi-autonomous Kurdish administration in Kobani, said a 17-year old died and 80 people were wounded. He said seven wounded were in critical condition.

A provincial Turkish official said the protesters threw stones at workers building the wall. He spoke on condition of anonymity in line with regulations. Turkey has been building a wall along its border with Syria since 2014.