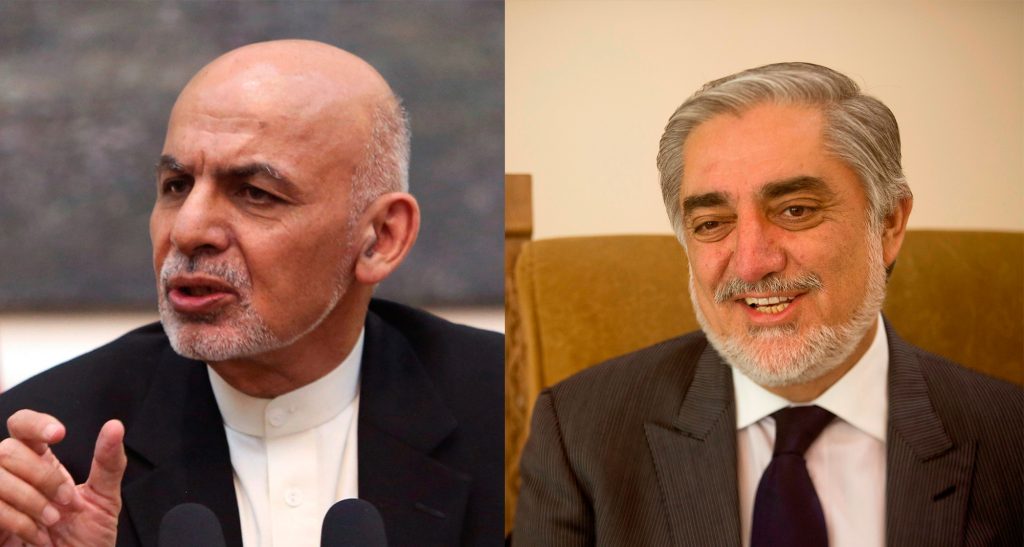 Amid intensified Taliban attacks across Afghanistan, an increasingly bitter public feud between the country’s two leaders is threatening a U.S.-brokered power-sharing accord.

The rift between President Ashraf Ghani and Chief Executive Abdullah Abdullah has attracted criticism from political parties, business leaders and ordinary Afghans as a September deadline for political and constitutional reform looms. The bickering between the leaders, forced into the power-sharing arrangement after the disputed 2014 election, risks sending the nation into further chaos.

“The worse-case scenario is political gridlock that could take on different forms, leading to unintended consequences in the fight against terror, economic well being and social cohesion,” said Omar Samad, a former ambassador to Canada and France and previously a senior adviser to Abdullah.

In an Aug. 11 speech in Kabul, Abdullah blasted the “unilateral approaches” by Ghani on issues such as the appointment of ministers. He accused Ghani of not implementing the power-sharing accord that aimed to prevent a possible civil war following the last election.

Ghani has so far failed to hold a Loya Jirga, a traditional national assembly of elders and politicians, to amend the constitution and create the position of prime minister for Abdullah, Samad said. Other outstanding issues include reforming the electoral system, holding parliamentary and district elections and issuing digital national ID cards, he said.

“None of it is ready nor anywhere close to being accomplished. This has resulted in political gridlock and loss of trust,” said Samad.

A fourth meeting was held late on Wednesday in an attempt to break the deadlock between the two leaders, with a spokesman indicating some progress had been made.

“Both leaders have so far agreed to create a commission to amend the current constitution” to create the position of prime minister, Omid Maisam, a deputy spokesman of Abdullah, said in a phone interview. After this, parliamentary and provincial council elections will be held and a Loya Jirga will take place to debate a transformation of Afghanistan’s political system, he said.

If approved, the new structure would see the position of president move to a more ceremonial role and result in Abdullah assuming “more power over government decisions,” Maisam said.

Ghani’s deputy spokesman, Shah Hussain Murtazawi, said there was no argument between the two leaders. “The Loya Jirga will be held after President Ghani issues a decree,” he said, adding there would be some delay before the gathering of tribal elders and constitutional amendments would take place.

Their strained relationship prompted Secretary of State John Kerry to intervene last month and urge the two to work together. Abdullah and Ghani have met three times in as many weeks but have failed to reach a final deal, according to an e-mailed statement from Abdullah’s press office.

“There’s no other way except the full implementation of the agreement to keep the situation calm,” Fazel Ahmad Manawi, a close aide to Abdullah and former chairman of Afghan Election Commission, said in a late-August interview with Voice of America.

Because Abdullah’s role had so far been mostly ceremonial, his “strong ties with some political parties and powerful Tajik warlords who have underground militia in the north region have weakened,” said Abdul Baqi Amin, director of the Center for Strategic and Regional Studies in Kabul.

“Still, if he abandons the government, the chance for them to return to Abdullah is certain to press Ghani to meet their demands, otherwise his supporters will be a dangerous threat to the country’s stability,” he said.

As the leaders argue, Taliban terrorists are making advances in the north. Some districts are being contested while others have already fallen to the Taliban, according to Tolonews.

“The recent rift will allow groups of militants to seize the opportunity and make advances,” said Sayed Hamid Gilani, a senior member of the Mahaz Milli Islami Party, which is not aligned with either leader. “They must compromise on their disputed issues otherwise that will further fuel an already fragile situation nationwide.”

Most recently, two unknown terrorists stormed the American University of Afghanistan, one of the country’s elite educational centers, killing 16. The attack, yet to be claimed by any group, was the deadliest on a civilian educational institution since 2001.

The U.S. two weeks ago sent 100 troops to help save Lashkar Gah city in Helmand province from collapse. The city has been under Taliban siege for more than a month, and an American soldier was killed and another wounded there last week.

The Taliban control more territory — 36 of Afghanistan’s 407 districts — than at any time since 2001 when they were ousted by the U.S. invasion, according to a report released in July by the Special Inspector General for Afghanistan Reconstruction.

Islamic State has also upped its attacks, claiming responsibility for July suicide bombings in Kabul that killed more than 80 people.

The turmoil led Nizamuddeen Qayumi to put his carpet-weaving business in downtown Kabul up for sale after he suffered a 55 percent downturn in profits over the last four months. He plans to leave Afghanistan, taking his wife and five children to Iran.

“Afghanistan is moving in an ambiguous direction,” said Qayumi, sitting on a rolled carpet inside his small shop. “I don’t know how we can manage our life and business under these risky conditions.”

Afghanistan’s $20 billion economy is strained. Per capita incomes have fallen since 2012 and the International Monetary Fund predicts they will continue to decline this year. The weak economy and continued insecurity has led more than 200,000 Afghans to flee, often choosing risky routes to reach Europe, according to government data.

Still, “I believe the issues that divide them and have caused consternation are not insurmountable,” Samad said of the two leaders. “There is hope that they will be able to resolve the main concerns and abide by the accord.”