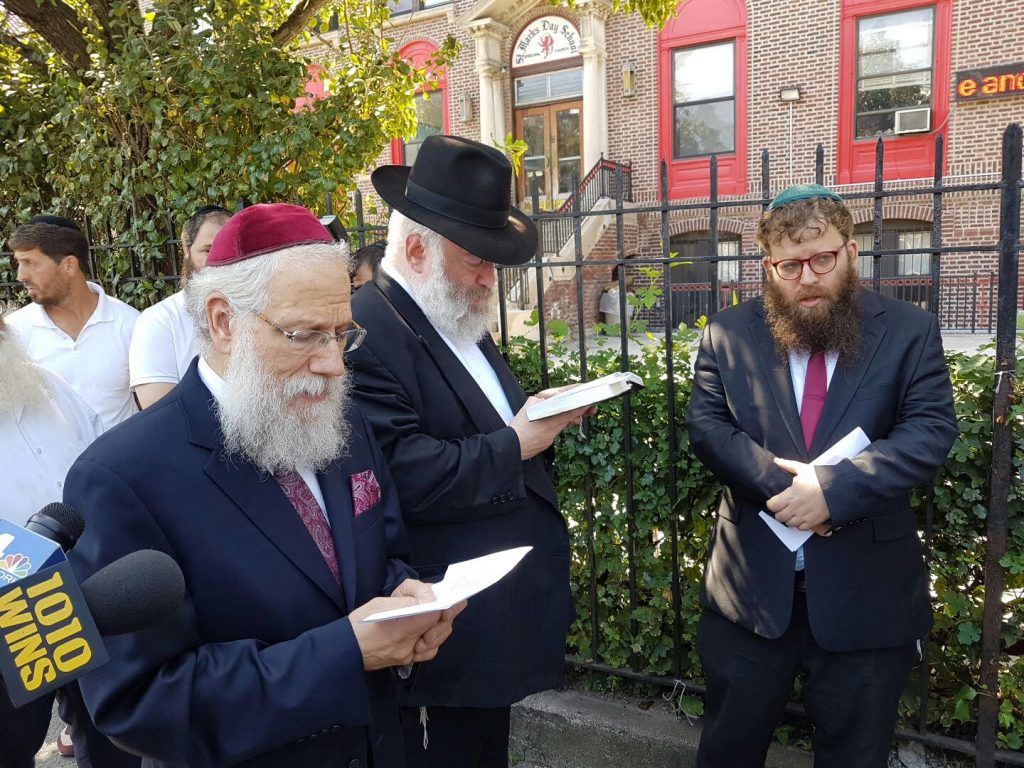 Last Shabbos, August 20, 2016, was the 25th anniversary of the death of Yankel Rosenbaum, Hy”d, which occurred during four days of terror that have become known as the Crown Heights riots.

On the evening of August 19, 1991, a car driven by a Lubavitcher chassid as part of the Lubavitcher Rebbe’s motorcade was crossing the intersection of Utica Avenue and President Street, when it was hit by a car driven by an African-American, who had run a red light. The chassid’s car spun onto the sidewalk, where it hit Gavin and Angela Cato, seven year-old Guyanese-American cousins. Gavin was killed instantly, and Angela was seriously injured.

Late that night, a bloodthirsty mob of 30 black men found what they were looking for: a Jewish man, walking down the street. Yankel Rosenbaum, a 29-year-old Lubavitcher chassid from Melbourne, Australia, who was doing research in New York for a doctoral thesis on “Issues of Conflict in the Shtetl from 1882 to 1932,” was turning the corner of Union Street and New York Ave. when he encountered the violent gang. Rosenbaum tried fleeing toward Lubavitch headquarters on 770 Eastern Parkway, but he never made it. On the corner of President Street and Brooklyn Ave., in front of the St. Marks School, the gang caught him and attacked him. One of the youths, 16-year-old Lemrick Nelson, Jr., stabbed Rosenbaum.

At the hospital, police began bringing suspects before Rosenbaum, who identified several. When Nelson was brought before him, Rosenbaum sat up in his hospital bed and asked, “Why did you stab me?!”

Sadly, Rosenbaum was niftar early on the morning of August 20.

The murder of Yankel Rosenbaum was the most shocking and tragic incident that occurred during the Crown Heights riots of August 19-23, 1991. Over the course of the riots, 152 police officers and 38 civilians and 152 cops were injured; 27 cars were destroyed; seven stores were looted or burned; 225 cases of robbery and burglary were performed. An estimated $1 million worth of property damage was committed.

Shockingly, Nelson was acquitted at his criminal trial. None of the other attackers were even brought to trial.

In subsequent years, Nelson continued to live a criminal life. From 1994-1996 he was arrested, and in some cases convicted and jailed on various charges, ranging from weapons and aggravated assault to second-degree assault, disorderly conduct and criminal trespass.

During these years, Yankel’s brother Norman, who had become the spokesman for the Rosenbaum family and the fight for justice, refused to give up. He, along with a team of askanim, lawyers, and elected officials, led an ultimately successful fight to have Nelson tried once again, in 1997, this time for violating Yankel’s civil rights by attacking him because he was a Jew. Nelson was ultimately convicted and sentenced to 10 years in prison; he was released in 2004.

Charles Price, who incited the mob by shouting into a megaphone, “We’ve got to kill Jews!” was also convicted of violating Rosenbaum’s civil rights, and sentenced to 21 years in prison; he is still behind bars.

Last Friday, the 25th anniversary of the beginning of the Crown Heights riots, Norman Rosenbaum and a group of friends and askanim visited the site of Yankel’s fatal stabbing. Tehillim and Mishnayos were recited, and Norman said kaddish for the neshamah of his brother.

In an interview with Hamodia Sunday, Norman spoke about the loss of Yankel, Hy”d.

“Obviously, I miss my brother,” says Norman. “There is not a day that goes by when I, my mother, and our whole family do not think about him. I’m a zeidy now, and as time goes on and there are more simchos in the family, he is missed even more. It is not just the feeling that we are celebrating and he is not here, but a feeling of the loss of how much he would have added to the simchah.”

Norman, as well as some leaders of the Lubavitch community in Crown Heights, dispute the notion that the riots were caused by tensions between Jews and blacks in the neighborhood.

“People ask what lessons have been learned in the time since the riots occurred,” says Norman. “At the time of the riots, there was a popular narrative that the violence that occurred and my brother’s murder were an eruption of tensions that had been simmering between the African-American and Hasidic communities in Crown Heights. This was and is completely false.

“It is important to understand that it was not African-Americans from Crown Heights who perpetrated or committed the acts that occurred, but rather anti-Semites who came from outside of the community. They came to exploit a terrible motor vehicle accident as an excuse to riot and inflict violence against Jews.

“It is regrettable that 25 years later there are still many who are actively perpetuating this myth. A continuing insistence on painting the events that led to my brother’s death and hurt so many as the result of these pre-existing tensions is not only intellectually dishonest, it does nothing to promote the racial harmony that we would all like to see.”

Norman hopes that all the perpetrators of this horrendous crime will be brought to justice.

“Only two people have been imprisoned for Yankel’s murder; there are 28 members of the mob that attacked him that remain free,” says Norman. “They have to be brought to justice.”

“It is a small amount of consolation that many of those who committed acts of violence in the south in the 1950’s and 60’s were only brought to justice decades later. We hope that the same will eventually occur with those responsible for Yankel’s death, and that justice will truly be served.”