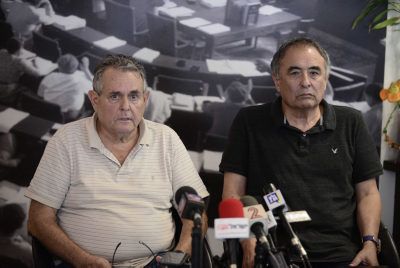 The Health Ministry on Sunday evening pulled the license of the Nesich company to manufacture tehina products over last week’s revelation that the company distributed salmonella-tainted products – a move that led the company Monday to accuse the Ministry of “playing favorites” and picking on Nesich, because it is a relatively small company, while leaving Unilever Israel alone, although its salmonella scandal was just as severe.

The first class-action lawsuits in the scandal were filed Sunday against Nesich and against Shamir, the company that used the Nesich raw tehina to manufacture ready-made salads under its own brand name and on behalf of other brands. After the discovery last week of tainted salads, Shamir recalled all the salads bearing its name, as did the numerous others – mainly supermarkets, which sell salads made by Shamir that they market under their own names. Thousands of salads were collected and presumably destroyed.

In addition to Shamir and Nesich, two supermarket chains – Supersol and Yochannanoff – were named in the class-action suit filed in a Lod court. The companies are being sued for NIS 6.7 billion, and attorneys claim to represent a class of tens of thousands of consumers who are plaintiffs, and will get NIS 1,000 in a settlement. The consumers say that they either consumed some of the salads and were forced to get medical attention in the wake of the publicity over the scandal, or that they felt betrayed by the stores and brands they were loyal to over the years.

The court ordered the defendants on Monday to respond to the suit, after which it will decide whether or not to certify it as a class-action suit.

In response to the suit, Shamir issued a statement saying that it “took the health of consumers very seriously. When we were alerted last week to the situation at the Nesich factory, we decided not to take a chance with the health of the public, and instituted a recall of our products using raw material from Nesich. Unfortunately, Nesich did not inform us of the situation, even though it had knowledge of the problem for at least 17 days before the revelations last week. We are considering our own legal actions against them.”

Meanwhile, Nesich is out of business for now, forbidden by the Health Ministry to process or sell raw tehina. In a statement, the Ministry said that Nesich acted in an “irresponsible, unprofessional, and careless manner. After a hearing and investigation that continued for many hours, we have decided to prevent the company from producing and selling its products. The company must now spend its time tracking down and destroying contaminated materials and products.”

Speaking on Army Radio Monday, Ronen Tzur, a spokesperson for Nesich, compared the tainting of the tehina with that of the other major salmonella story in recent weeks – the tainting of dozens of tons of cornflakes and other cereals manufactured by Unilever Israel under its Telma brand. Cereal production at the Arad plant where the contamination was found was ongoing, and last week the Health Ministry declared that the plant was safe, and that all contamination had been eliminated

Tzur said that the Health Ministry was being “tough” on Nesich, while letting Unilever Israel off the hook. “It is, of course, much easier to take a tough stance against a small factory in the Galilee than against other factories. If they would close down other factories like they closed Nesich I am sure that the Ministry would come up with different findings.”

In response to those comments, MK Itzik Shmueli (Zionist Camp) said that the circumstances certainly warranted the response. “When the Health Ministry finds contamination in a factory, obviously they need to take aggressive action before the product reaches consumers.”