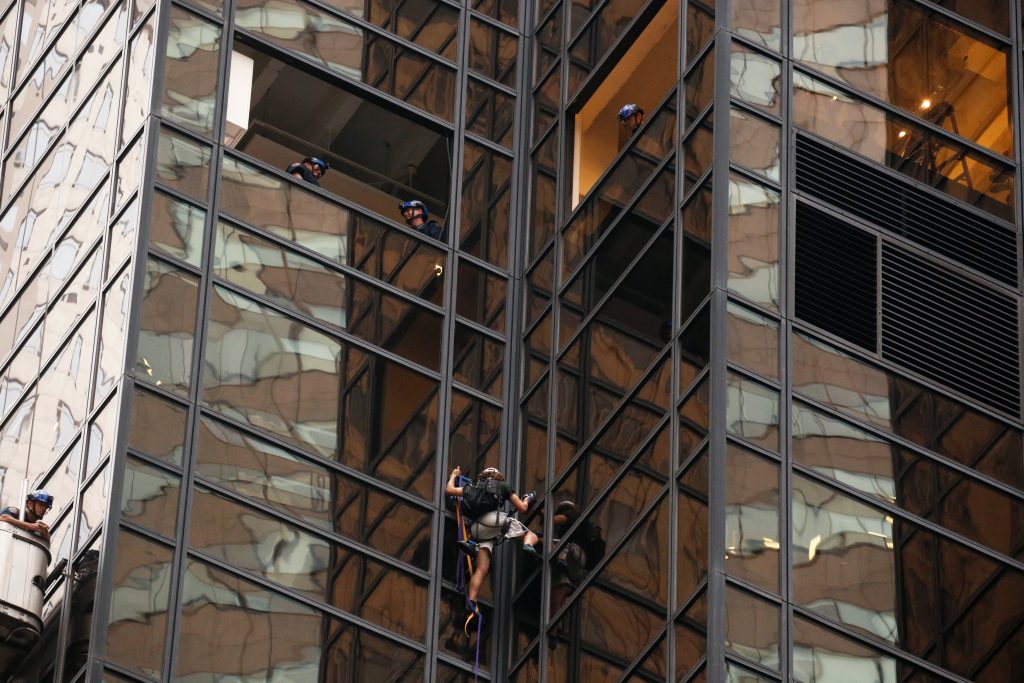 A man attempting to scale the all-glass facade of the 68-story Trump Tower in New York City using suction cups was finally pulled inside  by police on Wednesday evening, dozens of floors off the ground.

The climber had a backpack, and was using ropes and a harness to fasten himself to the suction cups on the side of the Manhattan skyscraper. He was finally pulled in to the building by police standing behind an open window at the 21st floor at 6:34 p.m.

Police officers had smashed windows and broken through a ventilation duct in an attempt to block his progress. On the other side of the building, firefighters blocked him in  using a window washer’s scaffold.

In a video posted online on Tuesday, entitled “Message to Mr. Trump (why I climbed your tower),” a young man who appears to be the climber says that he is “an independent researcher seeking a private audience with you to discuss an important matter. I guarantee that it is in your interest to honor this request. Believe me, if my purpose was not significant, I would not risk my life pursuing it. The reason I climbed your tower was to get your attention. If I had sought this via conventional means, I would be much less likely to have success, because you are a busy man with many responsibilities … ”

The video concludes with the man exhorting the public to “be sure to get out and vote for Mr. Trump in the 2016 election.”

The tower is headquarters to Donald Trump’s Republican presidential campaign and his business empire. Trump also lives there.

A Trump campaign spokeswoman hasn’t responded to a request for comment.

Terraces and other parts of the building are open to the public during the day.