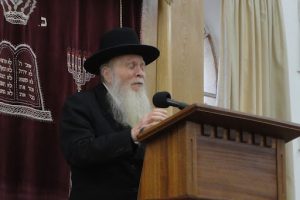 The Torah world was plunged into sudden mourning late Tuesday night with the passing of Rosh Yeshivas Mir Brachfeld, Hagaon Harav Aryeh Leib Finkel, zt”l, a member of the Moetzes Gedolei HaTorah of Degel HaTorah and a member of the presidium of the Vaad HaYeshivos. He was 85.

His shocked talmidim grieved the loss of the gaon in both Torah and middos. He was a pillar of the yeshivah, and of the community of Modiin Illit.

Exceedingly modest, he devoted his life to helping bachurim in ruchniyus and gashmiyus. He worried about each talmid as though he were his own son. His tefillah was renowned for its deep emotion and clear expression of deep yiras Shamayim.

Reb Aryeh served as the longtime shliach tzibbur for Rosh Hashanah and Yom Kippur at Yeshivas Mir in Yerushalayim.

Over the past year, Rav Finkel was hospitalized several times, first because of a broken leg sustained after falling in the yeshivah, which required surgery, and later due to a throat illness. However, in recent months he maintained his regular schedule of shiurim and other commitments.

Last week he felt unwell, and on Tuesday night he collapsed in his home. Just a short time earlier, he had davened Minchah in the yeshivah and Maariv in his home with a minyan at 11 p.m.

When the shocking news reached the talmidim, the paroches was taken down from the aron kodesh in the yeshivah and the heichal was prepared to accommodate the levayah.

The Rosh Yeshivah was a member of the presidium of Mifal HaShas, which was scheduled to meet in his home on Friday. Just before his passing he signed a proclamation from Mifal HaShas.

The Roshei Yeshivah of Mir Yerushalayim – Harav Eliezer Yehudah Finkel; Rav Aryeh’s brother-in-law Harav Aharon Chodosh, who just got up from the shivah for his brother (Rav Aharon was married to a sister of Reb Aryeh); Harav Yitzchak Ezrachi – and the Roshei Yeshivah in Brachfeld, Harav Noam Alon and Harav Tzvi Partzovitz, all came to the Rosh Yeshivah’s house after the petirah, along with his son, Harav Binyamin Finkel.

The levayah began Wednesday morning in Mir Brachfeld and later in the afternoon from Yeshivas Mir in Yerushalayim, en route to Har Hamenuchos, where he was buried.

The Rosh Yeshivah, a member of the legendary Finkel family of Mirrer Roshei Yeshivah, was born in Eretz Yisrael on 14 Av 5691/July 28, 1931.

His mother, Rebbetzin Leah, was the stepdaughter of Harav Yosef Chaim Sonnenfeld, zt”l.

Rav Aryeh Finkel grew up under the influence of his grandfather, Rav Eliezer Yehudah Finkel, zt”l, studying Torah and absorbing yiras Shamayim from him, and conveying his legacy to the coming generations of talmidim.

He married his Rebbetzin Esther Gittel, a”h, the daughter of Harav Shmuel Aharon Yudelevitz, zt”l. She passed away in 5752/1992, after which Reb Aryeh remarried.

After his marriage, he studied in the Mir kollel and then was appointed to serve as a Maggid Shiur in the yeshivah.

His shiurim became renowned in the Mirrer Yeshivah.

His father, Rav Chaim Zev, was a grandson of the Alter of Slabodka, which greatly influenced the sichos he delivered to his students, first at Heichal Hatalmud in Tel Aviv, which he established together with Harav Yosef Farber and Rav Tuvia Lesitzkin, zt”l, both talmidim of the Alter of Slabodka. He later spent 14 years at the Mir in Yerushalayim, where he delivered fiery shmuessen. He passed away two months after the passing of his own father, Rav Eliezer Yehudah, on 18 Elul 5725/1965.

Reb Aryeh noted that if not for his refusal at the time, Klal Yisrael would not have merited the sefarim of Rav Chaim Shmulevitz’s shmuessen…

In Elul 5760/2000, the Mir Yeshivah established a branch in Modiin Illit and Rav Aryeh was asked to lead it. He delivered both shiurim on the masechtos being studied in the yeshivah and powerful mussar shmuessen, which riveted the nearly 600 talmidim in the yeshivah.

Over the last 60 years, Reb Aryeh taught many thousands of talmidim. He was not only their Maggid Shiur or Rosh Yeshivah, he was a gaon in both Torah and sterling middos, and his persona taught the talmidim more than any mussar sefer.

In 5772/2012, he was appointed a member of the Moetzes Gedolei HaTorah of Degel HaTorah. He earlier refused this post, as long as his cousin, Harav Nosson Tzvi Finkel, Rosh Yeshivah, Yeshivas Mir-Yerushalayim, zt”l, was alive.

His shiurim and sichos were compiled in the sefarim Har Yeareh and Yavo Shilo, a collection of sichos mussar on the subject of Shabbos.

The levayah of the Rosh Yeshivah began Wednesday morning from the Mir-Brachfeld yeshivah, and then proceeded to the Mir yeshivah in Yerushalayim. Kevurah is to be on Har Hamenuchos.

A full tribute will, iy”H, appear in a future edition of Hamodia.

This article appeared in print on page 35 of the August 10th, 2016 edition of Hamodia.