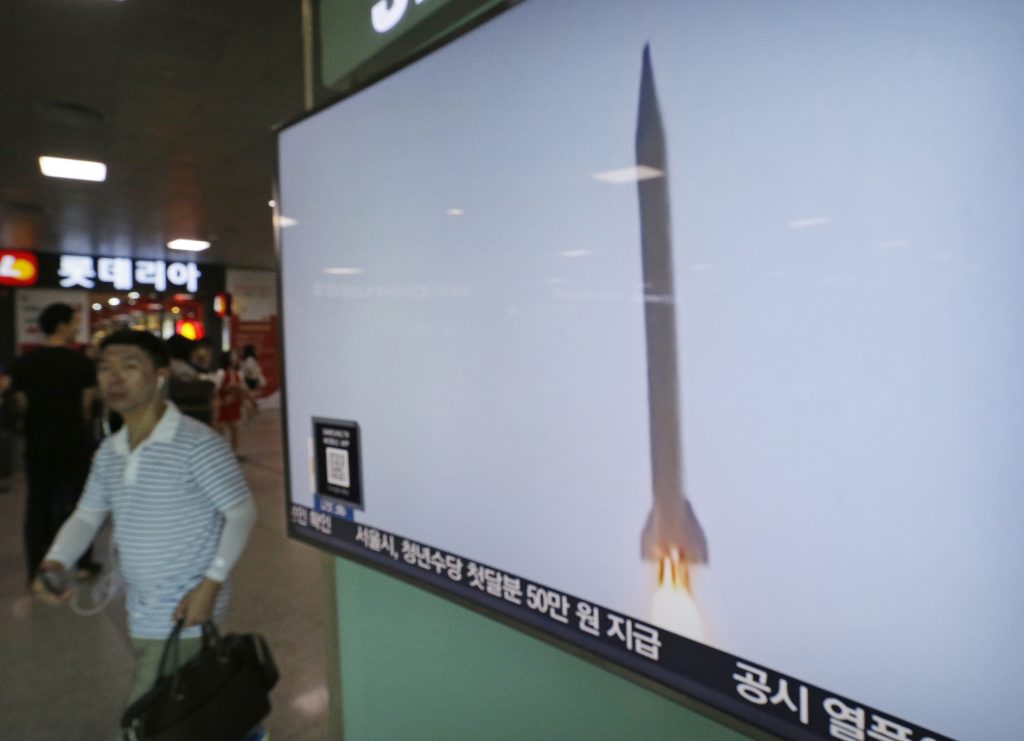 A medium-range ballistic missile fired Wednesday by North Korea flew about 620 miles and landed near Japan’s territorial waters, Seoul and Tokyo officials said, one of the longest flights by a North Korean missile.

The U.S. Strategic Command said North Korea fired two (presumed) Rodong missiles simultaneously on Wednesday. The command’s statement said initial indications reveal one of the missiles exploded immediately after launch, while the second was tracked over North Korea and into the Sea of Japan.

North Korea has recently claimed a series of technical breakthroughs towards its goal of acquiring a long-range nuclear missile capable of reaching the continental United States. South Korean defense officials say North Korea doesn’t yet have such a weapon, but some civilian experts believe the North has the technology to mount warheads on shorter-range Rodong and Scud missiles that can strike South Korea and Japan.

According to the South Korean and Japanese announcements, one suspected Rodong missile was launched from the North’s western Hwanghae province and flew across the country before falling in waters between the Korean Peninsula and Japan. Seoul’s Joint Chief of Staff said in a statement that he “strongly condemns” the missile launch because it explicitly shows the North’s intention to launch missile attacks on South Korea and neighboring countries.

Japan’s Defense Ministry said the missile landed inside Japan’s exclusive economic zone (EEZ), the 200-nautical-mile offshore area where a nation has sovereign rights for exploring and exploiting resources. Japanese media reported it was the first North Korean missile that has splashed down in Japan’s EEZ.

North Korea has previously fired Rodong and other missiles into the sea, but South Korean analysts say Wednesday’s 620 miles flight was one of the longest for a North Korean test.

Several other North Korean rockets have gone farther and even over Japan. But Pyongyang called them satellite launches, while Washington, Seoul and Tokyo maintain they were disguised tests of missile technology. After several failures, the North put its first satellite into space aboard a long-range rocket in December 2012, and conducted another successful satellite launch in February.

In June, after a string of failures, North Korea sent another type of mid-range missile known as Musudan more than 870 miles high. Analysts said the high-altitude flight meant North Korea had made progress in its push to acquire the ability to strike U.S. forces throughout the region.

North Korea routinely conducts weapons tests, but the latest launch came after North Korea warned of unspecified “physical counter-actions” against a U.S. plan to deploy an advanced missile defense system in South Korea by the end of next year.

Analyst Kim Dong-yub at Seoul’s Institute for Far East Studies said the latest Rodong launch appeared to be an attempt to show their ability to attack U.S. military bases in Japan, a major source of reinforcements for U.S. troops should a war break out on the Korean Peninsula.

Hyon Kwang Il, director of the scientific research department at the North’s National Aerospace Development Administration, told The Associated Press last week that Pyongyang’s military had mastered “the main and core techniques in long-range ballistic missile technology, including the starter engine technology, how to separate the different stages, guidance control techniques and re-entry, and it’s all ready to be operational.”

North Korea is known to have an arsenal of estimated 300 Rodong missiles whose maximum range is 800 miles. A Rodong fired in March flew about 800 kilometers (500 miles) while two other Rodongs launched in 2014 flew about 400 miles.

North Korea is expected to carry out more weapons launches in the coming weeks to protest the annual U.S.-South Korean military drills that begin later this month. North Korea describes those drills as an invasion rehearsal.

The Korean Peninsula remains in a technical state of war because the 1950-53 Korean War ended with an armistice, not a peace treaty. About 28,500 U.S. troops are stationed in South Korea and tens of thousands more in Japan.