Dear Science: Why Can’t We Just Get Rid of All the Mosquitoes?

By Rachel Feltman and Sarah Kaplan 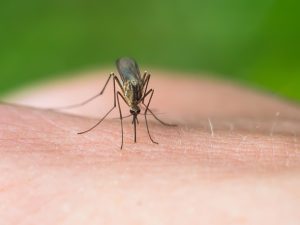 Dear Science: I seem to be a total mosquito magnet, and nothing I try keeps the biters at bay. With serious illnesses like Zika to worry about, that has me wondering why we don’t just get rid of the pests once and for all. What good do mosquitoes do?

A: Mosquitoes are our most deadly adversaries in the animal kingdom. While the “factoid” that floats around about malaria causing “half of all human deaths” throughout history is pretty silly, it’s true that we have the insects to thank for some devastating diseases. Over 400,000 people were killed by malaria alone in 2015 — a death toll that until recently was nearly double. Warming climates and increased global travel have helped previously obscure viruses like Zika and chikungunya gain footholds across the globe. And even if you never face a life-threatening disease because of a mosquito bite, swelling and itching is hardly a pleasant experience.

So why don’t we just zap them? Unfortunately, you shouldn’t expect to read about the total eradication of mosquitoes anytime soon.

Only female mosquitoes bite, even among these potentially deadly species, and only for a very brief portion of their life cycle — when they need nutrients to create eggs.

“They’re trying to do the right thing,” Ole Vielemeyer, infectious disease expert at Weill Cornell Medicine and NewYork-Presbyterian, told The Post. “They’re just trying to have enough food for their offspring.”

But during that stage of life, they might bite multiple victims (including those of different species). If a mosquito bites someone infected with an illness that can replicate inside the insect’s gut instead of simply being digested, that virus or parasite can then sneak into a new host when the bug’s saliva slips into a bite. It’s not the infected blood itself being passed along. Still, plenty of pathogens have evolved to thrive in mosquito saliva.

“Most of mosquitoes are harmless, but when they transmit diseases, horrible things can happen,” Vielemeyer added. “The ones that carry disease have caused human suffering for millennia. So it’s kind of a mixed bag.”

Many mosquitoes — harmless and otherwise — serve an important biological purpose. They can help pollinate plants as they feed on nectar (their usual food source, outside of that crucial blood meal period) and provide a vital source of food for larger animals. They’re vital components of a complex ecosystem, just like every other living thing. Researchers in the Arctic worried that climate change would lead more animals to feast upon local mosquitoes, throwing the food web out of whack and leaving plants unpollinated. As it turns out, warmer water has actually produced an Arctic mosquito boom — but that’s not great news for the baby caribou they feed upon.

The point is that just because humans hate mosquitoes doesn’t mean that they can be wiped out without consequences.

“We see the mosquito as sort of this evil thing,” Vielemeyer said. “But there are lots of positive things that they do in the ecosystem.”

That doesn’t mean that scientists have a live-and-let-live philosophy about these insects: Researchers are trying to eradicate mosquitoes. But they’re focusing on the ones that cause the most harm. The aegypti mosquitoes that cause Zika and the like — mosquitoes that have evolved to live in urban areas — are a particularly attractive target.

“There is no visible end to this except a war against aegypti,” Jo Lines of the London School of Hygiene and Tropical Medicine recently told The Guardian. “Otherwise this is going to go on for a thousand years.”

Many scientists are working on creating genetically modified male mosquitoes that can only father sterile offspring. If released into the population, these males could trick deadly mosquitoes into wasting their blood meals on useless eggs. Over the course of a few generations, the targeted species would dwindle. Trials in the Cayman Islands where several million of these modified mosquitoes were released resulted in a 96 percent population reduction.

Some have suggested simultaneously releasing bacteria that target males of the species (yes, that’s a thing that exists), which would help cut down on the number of fertile ones available. Other studies are working on using bacteria to help mosquitoes digest these deadly viruses and parasites instead of giving them a place to grow.

There’s more work to be done before genetically modified mosquitoes are ready to save the day. But some more “natural” methods show promise: One recent study found that a species of jumping spider in East Africa likes to go after mosquitoes that have just taken a blood meal. Dumping hordes of arachnids into your home isn’t going to save you from all mosquito-borne illness, but allowing natural mosquito predators to thrive certainly doesn’t hurt.

All of this is little consolation if you’re prone to probing proboscises. Lots of factors — from blood type to clothing color to body size — can make you a particularly appealing blood meal. If you’re in an area where mosquitoes carry disease, you should always protect yourself with a repellant that contains one of the active ingredients recommended by the Centers for Disease Control. Cover up as much of your skin as possible, and never sleep in a room with open doors or windows if you don’t have access to screens or a mosquito net.

“It’s always prudent to avoid getting bitten,” Vielemeyer said, even if your region isn’t known to host dangerous bugs. There’s no knowing when a species might expand its historic stomping grounds, or when a disease might adapt to living in a new host. “Prevention is always better than dealing with the after effects,” he said.