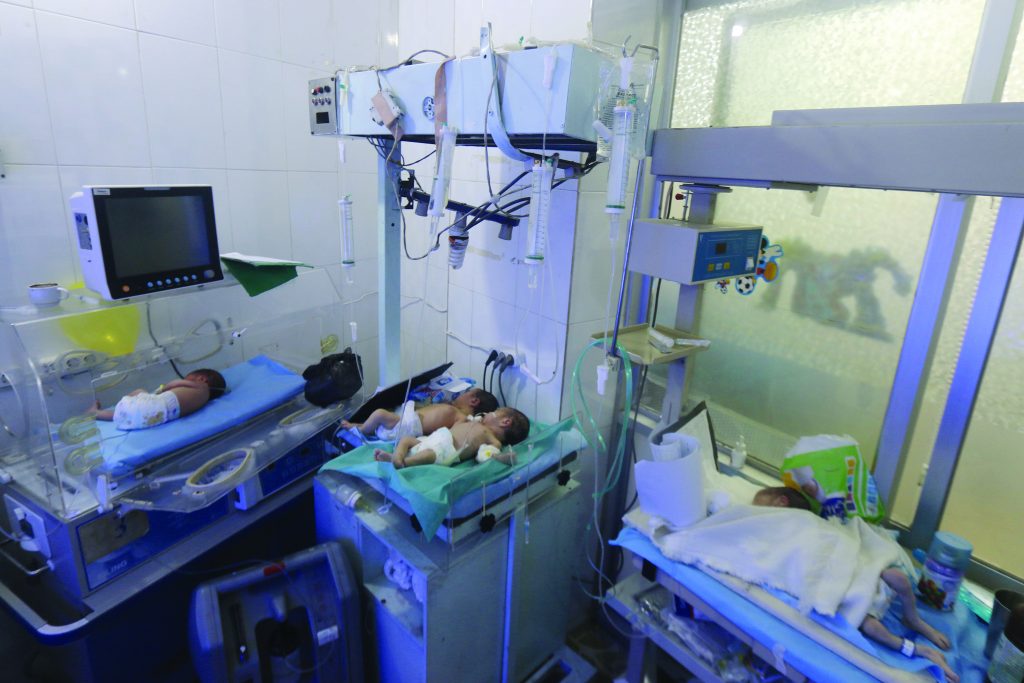 While the White House has placed humanitarian aid at the heart of its Syria policy, the government agency charged with disbursing it has frozen more than $200 million in contracts, fearing significant fraud.

As fighting deepens nightmarish conditions across northern Syria, the suspensions have affected the delivery of medicines, food and other life-saving aid to hundreds of thousands of civilians since December. An investigation into the suspected fraud was formally announced in April, but details did not emerge until a congressional hearing this month.

In Aleppo, a city shattered by violence, leading hospitals were brought to the brink of closure when they were left without financial support. Elsewhere, civilians displaced in baking heat received tarpaulins too small to cover an adult and food kits where lentils had been replaced with salt.

The agency has received at least 116 complaints of abuse, and 25 investigations have been opened, some two-thirds of which relate to theft and fraud. Contracts worth $239 million have been suspended.

At the House committee’s hearing, Thomas Melito, a senior official at the Government Accountability Office, which issued a report this month on improving oversight of Syria aid programs, said he did not believe USAID or the State Department had “any inkling” of how much money had been lost.

The problems underscore a wider dilemma: How to deliver aid in a war zone where most fear to travel. The U.S. is the leading humanitarian donor in Syria, but most of the $5.5 billion in American aid has been distributed through the United Nations and a host of partner organizations.

The United States closed its embassy in Damascus in 2012.

“When you work cross-border and without a consulate, things become very complex, very high risk, and very dangerous,” said Nancy Lindborg, president of the United States Institute of Peace and a former senior official at USAID. She likened the challenges of the cross-border operation to aid efforts in Somalia. There, as in Syria, aid workers have been kidnapped and killed for their work.

USAID said this month that most partner organizations had not assessed the risk of fraud within their operations. The agency said that it is working to rectify this problem and that it has supplied partners with a new handbook on how to spot malpractice.

“When USAID learned about possible fraud in humanitarian aid for Syrians, we took immediate action to halt several activities in Turkey and to suspend individuals and third-party vendors from receiving U.S. funding,” spokesman Ben Edwards said. “USAID has learned from this experience and is taking additional measures to protect our assistance, including limiting the amount of relief supplies in any one warehouse, enhancing program monitoring, and ensuring that programs are immediately suspended or terminated in the event of fraud or diversion.”

International Medical Corps (IMC), a Los Angeles-based charity, said Friday that some of its USAID-funded procurement remained on hold, pending the outcome of the investigation.

In southern Turkey, current and former IMC employees said in interviews that a “mafia” of suppliers had conspired to rig bids, accepting substandard goods that did not meet invoiced specifications. “It was like a cartel,” said one senior employee, who, like others, was not authorized to speak to the media or feared repercussions.

IMC said Friday that it had also fired a handful of staff members suspected of involvement in “sophisticated fraud schemes.” “We are fully prepared to move swiftly should we find additional staff are involved,” said Rebecca Gustafson, a spokesperson.

The funding suspension led IMC to cut 800 employees, the organization said, most of them Syrians living in the war zone. Each of “those salaries would have supported about 10 people,” a former staffer said.

The IRC said Friday in a statement that it was working “openly and collaboratively with USAID to investigate this issue.” It said its Turkey-to-Syria cross-border programs have served more than 2 million people, “notwithstanding the scale, risk and obstacles associated with operating within a war-torn environment.”

GOAL said Tuesday that it also was cooperating with the investigation and that U.S. funding for procurement parts of its aid program had been suspended.

Although remote programming has brought serious challenges, aid officials say it’s now the only option to serve areas of Syria outside of government control.

U.N. aid operations run out of Damascus are limited in scope, their activities affected by the demands of President Bashar al-Assad’s government, according to some critics. The Syria Campaign, a pro-opposition advocacy group, accused the United Nations in a report last month of abandoning its neutrality through a “culture of compliance” that allowed the government to veto aid deliveries to besieged areas where figures compiled by the Syrian Network for Human Rights suggest more than 400 people have starved to death.

At a news conference after the its release, U.N. Secretary General Ban Ki-moon’s spokesman, Stephane Dujarric, said the report “discredits the work of national and international humanitarian aid workers.”

“The U.N. has never shied away from calling out the parties in the conflict, including the Syrian government, for hampering the humanitarian work of the U.N. in Syria,” he said.

Reflecting on the corruption, a former IMC staffer said the investigation should act as a “wake-up call” for aid groups.

“You can’t get away with that sort of poor oversight and lack of procedure anymore,” the staffer said, speaking on the condition of anonymity.