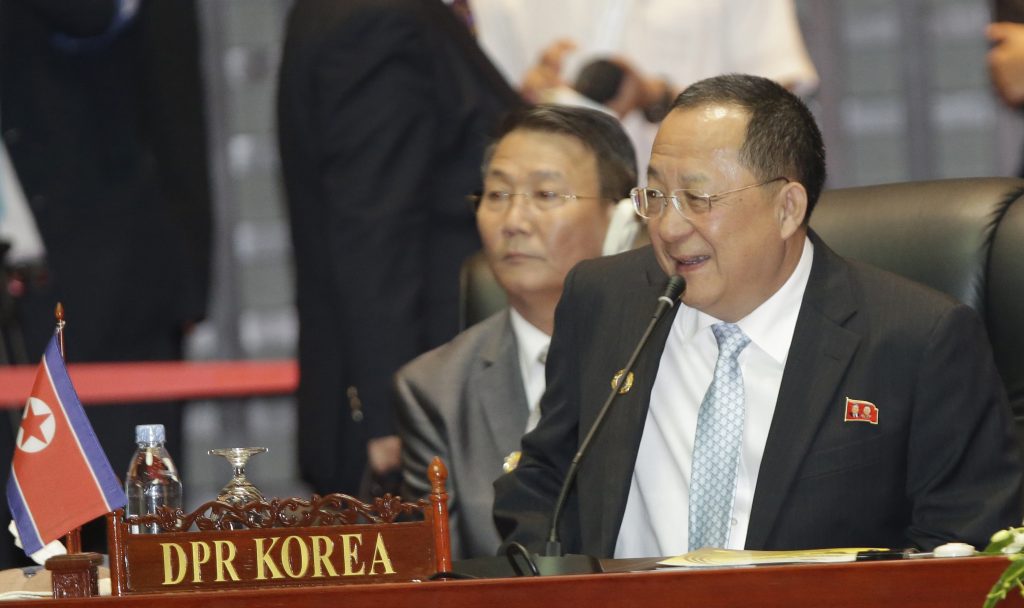 North Korea warned the United States on Tuesday that it will pay a “terrifying price” if the Korean Peninsula sinks into deeper tensions, stepping up its rhetoric hours after U.S. Secretary of State John Kerry blasted Pyongyang for its nuclear program.

Kerry told a regional security conference being hosted by Laos that North Korea’s pursuit of nuclear weapons — when the world is trying to rid itself of them — is “very provocative and deeply concerning.” He urged the country to follow the lead of Iran, which hammered out a deal to end its nuclear program in return for the lifting of sanctions.

However, North Korea was slapped with new U.N. sanctions in March, and Kerry urged the international community to fully enforce those and previous sanctions.

In North Korea’s typical fashion of unleashing rhetorical threats, its foreign minister, Ri Yong-ho, told the same conference, known as the ASEAN Regional Forum, that it is ready to face any sanctions and took them into account when it took the “inevitable strategic decision” to develop nuclear weapons to counter the “never-ending nuclear blackmails of the U.S.”

North Korea says it needs nuclear weapons to cope with what it sees as U.S. military threats. The United States stations about 28,500 troops in South Korea and regularly holds joint military drills with South Korea. Pyongyang has long demanded Washington withdraw its troops from South Korea and stop the joint drills, which it calls an invasion rehearsal.

“We are ready to show that even a (powerful) country will surely not be safe if it tries to torment and harm a small country,” Ri said, according to the text of his speech released to the media. “The United States will have to pay dearly a terrifying price.”

Some analysts say North Korea has developed a handful of crude nuclear devices and is working toward building a warhead small enough to mount on a long-range missile capable of reaching the continental U.S. However, South Korean defense officials say the North has neither such a miniaturized warhead nor a functioning intercontinental ballistic missile.

Kerry said if Iran can give up nuclear weapons so can North Korea.

“North Korea in January did another nuclear test. In February, March, April, May, continually they have done missile tests,” he said. “So together we are determined, all of us assembled here — perhaps with one exception assembled here — to make absolutely certain the DPRK understands that there are real consequences for these actions.”