Politics Bernie Sanders Pleads with Supporters to Back Clinton
Politics 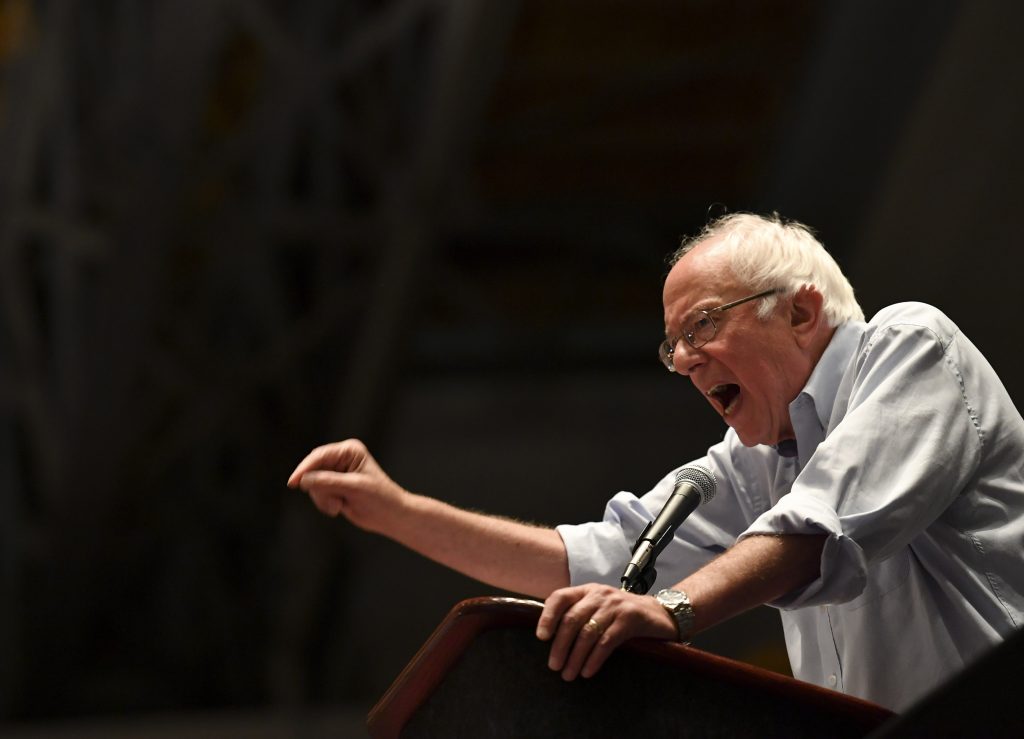 Bernie Sanders closed out the first day of the Democratic party’s convention with a forceful plea for his supporters to get behind the party’s nominee Hillary Clinton.

The Vermont senator spoke to a packed arena that had for hours swung wildly from unified highs to divided lows.

“Based on her ideas and her leadership, Hillary Clinton must become the next president of the United States,” Sanders said. “The choice is not even close.”

Even as he spoke, the reaction was mixed and emotions ran high. His most ardent supporters called out “We want Bernie!” Others stood silently, tears streaming down their faces.

Sanders, who entered the hall after the “America” ad that became a hallmark of his campaign was played, acknowledged the divisiveness that has occurred as Democrats attempt to unite against Republican Donald Trump.

“I understand that many people here in this convention hall and around the country are disappointed about the final results of the nominating process,” Sanders said. “I think it’s fair to say that no one is more disappointed than I am. But to all of our supporters – here and around the country – I hope you take enormous pride in the historical accomplishments we have achieved.”

Earlier in the night, minutes after the gavel went down in the Wells Fargo Convention hall, Sanders supporters made their displeasure with the party’s nominee known.

They booed loudly at virtually every mention of Clinton’s name and at other times, defiantly led chants of “Bernie! Bernie! Bernie!”

Behind the scenes, the Sanders and Clinton campaigns rushed to quell the anger within the Sanders ranks that had been reignited with the release of hacked emails of Democratic National Committee officials in the past week.

By the time Sanders appeared in the arena, the room was awash in blue lights and light blue “Bernie” signs. Sanders stood, taking in the adulation for several long minutes before launching into what would prove to be a challenging task: finally bringing his supporters into Clinton’s fold.

“If you think you can sit it out, take a moment to think about the Supreme Court justices that Donald Trump would nominate and what that would mean to civil liberties, equal rights and the future of our country,” Sanders warned.

As the night progressed, a parade of speakers, including lawmakers, labor leaders and even pop stars, turned more fully toward making the case for Clinton and against Trump.

The rowdiest of delegates was temporarily calmed by a series of speakers who declared loudly that Clinton opposed the “job killing” Trans-Pacific Partnership trade deal. Others peppered their speeches with Spanish and highlighted stories of overcoming difficult odds.

Their endorsements were interspersed with carefully crafted videos promoting Clinton’s work on health-care reform and her promise to address immigration reform.

But there was no argument for Clinton more well-received in the hall than the one coming from first lady Michelle Obama.

“I’m here because in this election, there is only one person who I trust with that responsibility and only one person who is truly qualified to be president of the United States, and that is our friend Hillary Clinton,” Obama said. “I want someone who has the proven strength to persevere.”

The crowd rose to their feet, and delegates called out, “We love you, Michelle!”

She was followed quickly by Sen. Elizabeth Warren, D-Mass., whose speech was billed as the night’s keynote. Warren urged support for Clinton but mostly, she delivered cutting criticisms of Republican presidential nominee Donald Trump.

Warren warned that Trump is “a man who must never be president of the United States.”

She said that Trump is seeking to win votes “by turning neighbor against neighbor, by persuading you that the real problem in America is your fellow Americans, people who don’t look like you or don’t talk like you or don’t worship like you.”

Warren and Obama both warned that the party must work as hard as they did to elect Barack Obama four and eight years ago to elect Clinton.

“In this election, we cannot sit back and hope that everything works out for the best,” Obama said. “We cannot afford to be tired or frustrated or cynical.”

At another point, Obama grew emotional reflecting on Clinton’s potential to be the first woman president in the country’s history.

“Because of Hillary Clinton my daughters can now take for granted that a woman can be president of the United States,” she said, her voice breaking with emotion.

Earlier, the party struggled to find unity in its opening night, even while attempting to highlight the diversity of its members and the platform of its nominee, Hillary Clinton, and make the case against Donald Trump.

A series of testimonials and videos put Trump’s most divisive and controversial moments on the national stage. A woman with disabilities derided him for comments that were widely seen as an effort to mock a disabled reporter; a young woman with undocumented parents talked about her fear of deportation; a satirical video mocked the various Trump-branded products that were made overseas.

They were followed swiftly by testaments to Clinton’s work, highlighting her advocacy for undocumented immigrants, for health care.

The opening night programming was carefully crafted to highlight a party unified around a platform of economic and social policies for families and diversity – especially in contrast with the Republican convention, which was held last week in Cleveland.

“Valiante, brave. That’s what Hillary Clinton called me when I told her I was worried about my parents being deported,” said 11-year-old Karla Ortiz. “Hillary Clinton told me that she would do everything she could to help us.

Between speakers, old clips of Trump’s interviews and speeches played through the convention hall.

“I don’t want to sound too much like a chauvinist, but when I come home, and dinner is not ready, I go through the roof,” he said in one clip.

Later, Clinton’s campaign chairman John Podesta declared: “He is too erratic dangerous and divisive to entrust with the White House.”

Just as it seemed that the convention floor had calmed, Sarah Silverman, a Sanders supporter, and former comedian and current U.S. Sen. Al Franken (D-Minn.), a Clinton supporter, teamed up to jovially encourage the two camps to unite.

“This past year, I’ve been feeling the ‘Bern’,” Silverman began. Then she said, “Hillary is our Democratic nominee, and I will proudly vote for her.”

But as she vouched for Clinton, Sanders supporters began booing.

“Can I just say to the ‘Bernie or Bust’ people, you’re being ridiculous!” Silverman retorted, touching off a volley of “Hillary!” and “Bernie!” chants.

It was just such a moment, as the convention approached its prime-time hours, that Democrats had hoped to avoid.

In an emailed message sent to his delegates just as the convention began, Sanders urged them not to sabotage the movement they had spent months building.

“Our credibility as a movement will be damaged by booing, turning of backs, walking out or other similar displays,” Sanders said in the note.

After being heavily criticized by Sanders and other prominent party leaders, ousted DNC Chair Debbie Wasserman Schultz faced the prospect of boos from Sanders supporters and instead of gaveling in the convention, she remained off stage. She was replaced by Baltimore Mayor Stephanie Rawlings-Blake who opened the convention at 4:15 p.m.

But Wasserman Schultz’s absence did not appease Sanders supporters for long.

For three-full hours, they objected nearly every time a motion was brought up for a voice vote, calling instead for a roll call; they chanted against the TPP trade deal; they waved signs and banners.

The leak of emails that showed DNC staff apparently scheming to help Clinton win the Democratic primary looms over the four-day convention. Wasserman Schultz resigned her post effective the end of the event. The FBI said it was investigating the breach.

Sensing a raw mood among his supporters, the Sanders team reached out to the Clinton team Monday afternoon to voice worries that its supporters may cause a stir Monday night, even after Wasserman Schultz resigned, according to a Democrat familiar with the talks.

Clinton aide Marlon Marshall and Sanders deputy campaign manager Rich Pelletier huddled in the afternoon to develop a joint plan to try to avoid excessive disruptions, the official said. This person spoke on the condition of anonymity.

On the convention stage, one of Sanders’ most ardent backers, Maine state Rep. Diane Russell, urged his supporters to celebrate a real victory: the “unity commission” that would recommend cutting back the number of superdelegates that were not bound to vote for a nominee based on the results of the primaries or caucuses.

“We did not win this by selling out,” Russell said. “We won this by standing up.

“We won this by standing together,” she added.

Longtime Democratic strategist and a vice chair of the convention, Donna Brazile, was named interim chair of the party effective on Friday, upon the resignation of Wasserman Schultz.

On Monday afternoon, Brazile acknowledged the rowdy convention atmosphere but said she was confident that the party would get through it.

“It takes time to heal, time to come together,” Brazile said. “I’m confident that we can find common ground, which is what’s most important.”