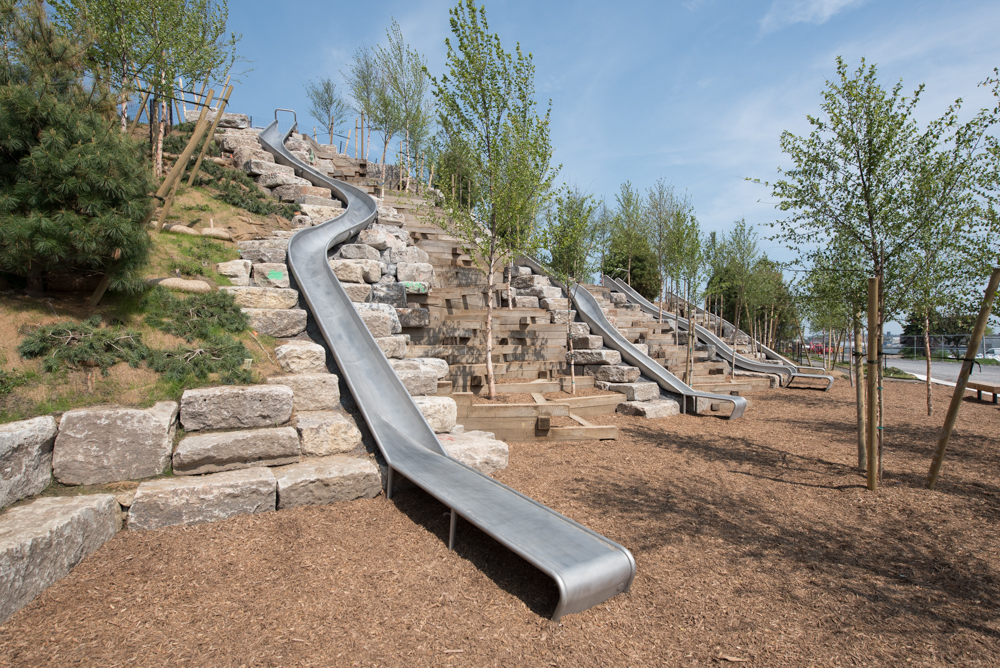 Four new hills built on New York City’s Governors Island offer sweeping views of the Statute of Liberty and lower Manhattan, unique places to hike and climb, and massive slides that dwarf those found on any playground.

The 10-acre park that opened Tuesday called The Hills is the newest piece of the redevelopment of the once off-limits former Army and Coasts Guard base in the heart of New York Harbor.

The four hills, built in part with fill and debris from demolition of the island’s old barracks, range from 26 feet to 70 feet high and have been lushly planted with trees, shrubs and grasses. One, aptly named Slide Hill, has four stainless-steel chutes that run as long as 57 feet.

“One of the signatures of Governors Island is this idea that play is for everyone,” Leslie Koch, president of the trust created by the city to oversee redevelopment of 150 acres of the island. “There’s no age limit. Adults are invited to play, not just children.”

Gulls cawed overhead as Koch described how the hills were designed to take advantage of the island’s 360-degree vantage point, offering views not only of New York’s skyscrapers and Lady Liberty, but of burgeoning Jersey City, New Jersey, and the Brooklyn and Verrazano bridges.

“With each foot that you go up the hills, you get more and more,” Koch said. 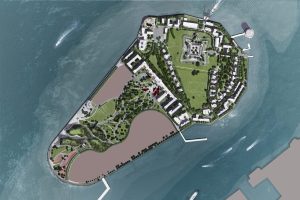 The Dutch landscape architecture firm West 8, based in Rotterdam, designed the park. Designer Adriaan Geuze said the pathways that wind around the park’s hills create “conceal and reveal” vistas that create a sense of anticipation.

Outlook Hill, at 70 feet the highest point on the island, can be ascended by strolling up a sloping path or by climbing over granite blocks salvaged from the island’s old seawall.

Governors Island was off limits to ordinary New Yorkers during most of the past 200 years, and Koch said the redevelopment over the past decade has been aimed at making it part of the “living, breathing city.”

Other attractions include tours of Castle Williams, a 19th-century fort built to prepare for a British attack, bike trails and Hammock Grove, which has playgrounds for children and 50 hammocks for their parents.

Governors Island is open to the public from May 28 to Sept. 25. Ferries run daily from the Battery Maritime Building in lower Manhattan and on weekends from Pier 6 in Brooklyn. The round-trip cost is $2 for adult and $1 for senior citizens. There is no cost for children under 13. The ferry is free for everyone on Saturdays and Sundays until 11:30 a.m. Cars on not allowed on Governors Island, but visitors can bring bicycles on the ferry or rent them on the island.