Sterling Steadies After Fall Below $1.30 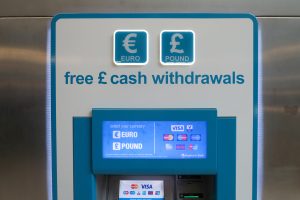 An ATM cash machine that offers withdrawals in either pound sterling or euros is seen in Canary Wharf Financial center in London. (Reuters/Russell Boyce)

Sterling steadied on Thursday after two more days of nerves over the fallout of Britain’s vote to leave the European Union drove it below $1.30 for the first time in more than three decades.

Analysts and traders remain convinced more weakness in the pound is on the cards, with some predicting a fall to the low $1.20s and others expecting eventual parity with the euro, compared to current euro levels around 85 pence.

However, the impact of property-related nerves that have hit British assets this week eased somewhat in initial trade in London on Thursday, helped by some brighter U.S. economic data the previous day.

“Buyers came back into the market with conviction after the fall to below $1.28,” said Tobias Davis, head of corporate currency sales at Western Union in London.

“But the 31-year low still sets the scene for a potential shift towards $1.25, as long-term technical levels coupled with fundaments will maintain this vulnerability.”

The suspension of half a dozen open-ended property funds has dominated minds this week, seen as a sign of growing financial stress after the Brexit vote.

A collapse in the prices of property, a market that has attracted billions in foreign investment, has turned attention back to the inflows Britain needs to attract to cover a current account deficit now running at 7 percent of national output.

That hints at further big adjustments for sterling. The Bank of England (BoE) for now also appears set on cutting interest rates to help revive growth, rather than raising them to support the pound.

Manufacturing and industrial output data for May will offer more evidence of how severely the economy was already slowing in advance of the June 23 referendum.

“The surprising surge seen in April is highly unlikely to be sustainable as uncertainty ahead of the referendum hit U.K. manufacturers,” analysts from the Italian bank Unicredit said in a note.

“We remain bearish on sterling – targeting $1.20 and 0.93 per euro for the fourth quarter, given worsening business sentiment, the expected deterioration of the U.K. economy and the BoE bringing the base rate back to zero.”