World Blair Had Qualms on Iraq War, But Promised Bush Support ‘Whatever’
World 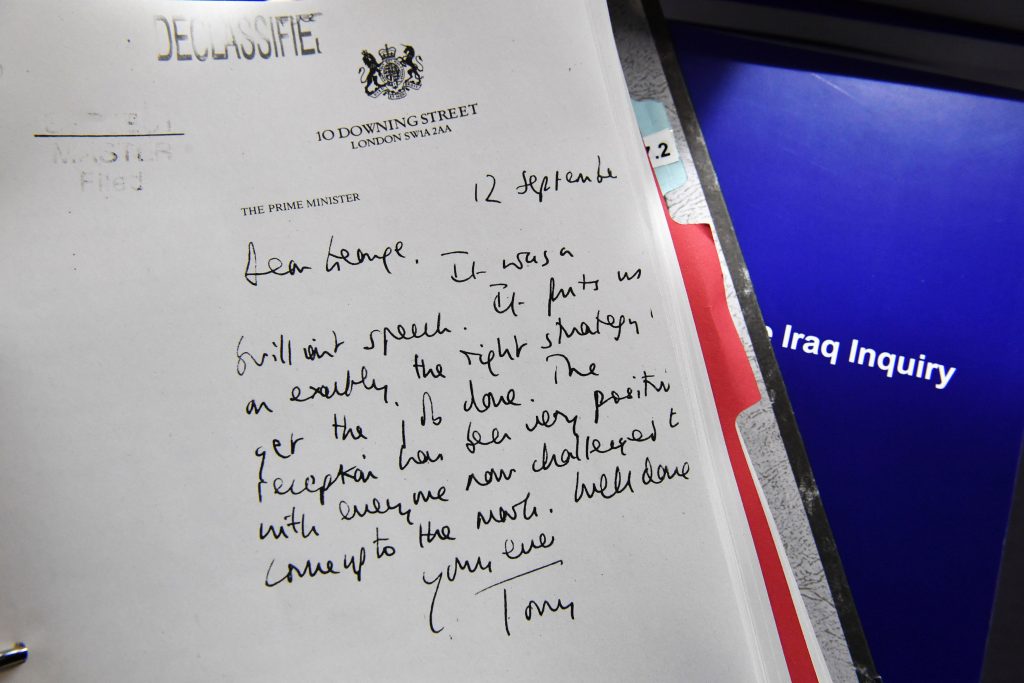 British Prime Minister Tony Blair wrote to U.S. President George W. Bush eight months before the 2003 Iraq war that he would support him “whatever”, even as he outlined numerous reservations about a possible military operation.

The contents of the July 28, 2002 note, originally classified “SECRET-PERSONAL,” were revealed on Wednesday in the findings of a seven-year British inquiry into the conflict.

In the very first sentence, Blair promised Bush: “I will be with you, whatever.”

The inquiry report quoted a top Blair aide as saying that he and another adviser had tried to get the prime minister to drop the sweeping promise. But the aide told the inquiry Blair ignored their recommendations.

The note is significant in the light of persistent accusations by Blair’s critics that he was a ‘poodle’ of Washington whose subservience caused him to lead Britain into a disastrous conflict.

Blair denies this, and told the inquiry: “I could not and did not offer some kind of ‘blank check’ in how we accomplished our shared objectives.”

In the note to Bush, the British leader explained his concerns that ousting Iraqi dictator Saddam Hussein could prove much harder than previous military interventions since the 1991 Gulf War.

“This is the moment to assess bluntly the difficulties,” Blair said. “The planning on this and the strategy are the toughest yet. This is not Kosovo. This is not Afghanistan. It is not even the Gulf War. The military part of this is hazardous.”

Blair went on to suggest that the United States, with British support, could oust Saddam on its own, but wondered whether a broader coalition was needed.

“The danger is, as ever with these things, unintended consequences. Suppose it got militarily tricky. Suppose Iraq suffered unexpected civilian casualties. Suppose the Arab street finally erupted….

“If we win quickly, everyone will be our friend. If we don’t…recriminations will start fast.” Blair added.

His reservations were prescient: the war plunged Iraq into a sectarian conflict in which, by 2009, at least 150,000 people, mostly civilians, had been killed.

Blair expressed his concern that neither the Germans, French and “probably not” the Italians or Spanish would support any military coalition to oust Saddam without explicit and specific United Nations authority, adding: “At the moment, our best ally might be Russia!”

The inquiry report said the note “reflected Mr. Blair’s own views” and that his proposals “had not been discussed or agreed with his colleagues.”

It said Sir David Manning, a senior policy adviser to Blair, confirmed to the inquiry that he had tried to get Blair to drop the first sentence pledging his loyalty “whatever” because it seemed to Manning to “close off options” and that this was “not a sensible place to be.”

Another Blair aide, Jonathan Powell, “agreed” that the promise should be dropped, “But the Prime Minister decided to leave it,” Manning told the inquiry.