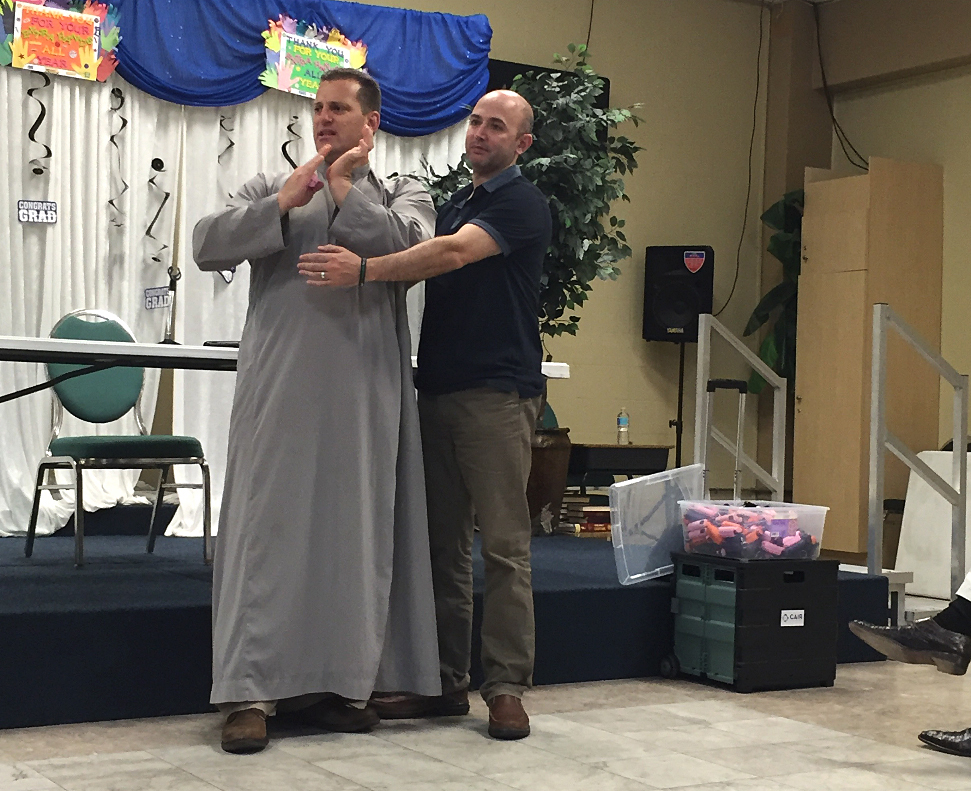 Nezar Hamze stood before those crowded into the mosque’s prayer room, speaking through his headset mike. He explained their rights to self-defense and talked up the benefits of home security systems. And had all the women received their complimentary canisters of pepper spray? Nods spread across the room.

Good, said Hamze, nodding too. “I want to move on to extremism.”

It had been 10 days since Omar Mateen, a self-declared adherent to the Islamic State, massacred 49 people at an Orlando nightclub. And Hamze, a police officer in the Broward County Sheriff’s Office, wanted to prepare this mosque’s congregants for what might come next.

Attacks and threats against Muslims are rising, along with suspicion and fears, he told several dozen men, women and children seated on folding chairs. “I’m not trying to scare you,” he said, “but that is where we are right now.”

Donald Trump, expected to be the Republican candidate for president, has continued his call to ban Muslims from entering the country. Federal undercover investigations have led to the arrest of dozens of young people in homegrown terror cases. In the face of that, Hamze, who moonlights as Florida operations director for the Muslim advocacy group Council on American-Islamic Relations (CAIR), has embarked on a unique effort to educate American Muslims about their rights and safety, while also seeking to deter what Hamze calls “the needle in the haystack” – the Muslim who commits an act of violence in the United States.

When that happens, “the American Muslim community feels the backlash immediately,” he told his audience. His message: The community needs to protect itself.

In this, CAIR-Florida is bucking the policy of its national headquarters, as well as several prominent civil and human rights groups. Critics say intervention efforts focused on Muslims, which the Obama administration refers to as “countering violent extremism,” are driven more by politics than by data, heighten distrust and can be powerfully stigmatizing.

Hamze dismisses the critics as out of touch with reality. The fact is, Hamze says, echoing federal proponents of such a focus, American Muslims who kill in the name of Islam are rare, but they do exist.

“For us not to have a program in place and have the community trained to get people help in these situations is irresponsible,” he said.

At mosques across South Florida, he tells congregants about CAIR-Florida’s new intervention teams, made up of mental health professionals, social services workers, religious leaders and others. Since the program started nine months ago, mosque members have called on the teams seven times, Hamze said. In a few of those cases, the team contacted law enforcement.

Along with other small-scale intervention efforts led by a handful of imams in other states, CAIR-Florida’s team approach has no relationship to fledging federal government programs. It is Muslim-led, not government-sponsored. That may be a key to its success.

If anyone is concerned that a family member, friend or community member might be “going down the wrong path,” don’t just avoid them, Hamze told his audience in this suburb of Miami.

“Surround them with love,” he said. “And you don’t have to do it alone. All you have to do is pick up the phone.”

So far, the federal government has tried education and what proponents call “counter-messaging” to challenge the Islamic State’s online propaganda. That included a May student competition in Colorado, in which the winners, from Aurora Community College, created a campaign entitled, “Thank You America,” featuring “positive stories and contributions of immigrants and refugees,” according to a press release from the state U.S. Attorney’s office.

Officials at the Justice Department, Homeland Security and FBI have also discussed “prevention and intervention” programs that would more closely resemble what Hamze and his colleagues in Florida are doing.

Spurred by the Orlando attack, the House Appropriations Committee late last month approved $49 million for countering violent extremism and related efforts through the Department of Homeland Security. It’s not clear the measure would pass the House and Senate; Republican lawmakers have voiced concern that such programming so far has no “track record” and no “metrics,” said Jennifer Hing, a spokeswoman for Appropriations Committee Chairman Harold Rogers, R-Ky.

While crime statistics and surveys indicate that American Muslims have no greater predeliction for violence than any other American religious group, federal programming to counter violent extremism to date has focused almost exclusively on Muslim communities, critics say.

Further, because there is no clarity on what causes people to take up terrorism and commit violence, either here or abroad, there is no predictive science to identify who is a likely risk, experts on extremism say. DHS, which is set to solicit state, local and private proposals for $10 million in federal program grants later this summer, has not yet spelled out what kind of programs it thinks are likely to be effective.

“Despite the fact that these are identified as a national security priority for the country, the public knows very little about how these programs are being structured, implemented, and financed and to what end,” said Hina Shamsi, the director of the American Civil Liberties Union’s National Security Project. The ACLU sued several agencies this year to provide more information about the programs; Shamsi said the documents the government has provided so far have been “nothing significant.”

Without that information, she and others say, ordinary civilians like teachers and counsellors could be asked to identify and “intervene” on behalf of people they suspect of committing a future crime, a practice so vague that civil rights groups warn it could be more harmful than helpful.

The Departments of Homeland Security and Justice and the FBI say their programs do not target any one religious group, and that intervention for people believed to be at risk of committing violence should be an important component of countering extremism.

“Tools other than arrest and prosecution need to be established,” said George Selim, who leads the administration’s Countering Violent Extremism Task Force from DHS. But the department has not specified how specifically interventions would work in the absence of concrete indicators to identify extremists.

“They should consider the worst-case scenario,” said Naureen Shah, who directs the security and human rights program at Amnesty International USA, pointing to an FBI web game called “Don’t be a puppet,” that encourages participants to speak up if a student or peer is talking about visiting a “suspicious” place, or is using “code words or unusual language.”

“What if your [countering violent extremism] program is in the hands of one of my [former] high school teachers in Texas who thinks that all Muslims are terrorists?” Shah asked. “You can assume good faith, but you also need to assume prejudice because of the constant association between Muslims and terrorism in society.”

An FBI plan, first reported by the Intercept, to build its own intervention teams called Shared Responsibility Committees – not unlike CAIR-Florida’s teams in terms of make-up, but hand-picked and vetted by the bureau to provide counselling to individuals already under investigation – only heightened suspicions among some civil-rights and Muslim community leaders.

A senior FBI official who works on the CVE initiative said the bureau plans to ask the committees to help with people “in crisis,” those whom the FBI is already investigating because they have shown some intent or capability to commit a violent extremist act. But the FBI would not use the committees for intelligence gathering, said this official, who is not authorized to speak publicly about the program and was granted anonymity. Committee members could, however, be subpoenaed to testify and turn over documents if the individual were subsequently charged, the official added.

Meanwhile, in Boston, Los Angeles and Minneapolis, federal pilot programs announced in 2014 to prevent extremism have met such fierce resistance from local Muslims that the first two remain mired in the developmental stage. In Minneapolis, officials were compelled to change its name from “Countering Violent Extremism” to “Building Community Resilience.”

Mohammed Malik, who once reported Orlando shooter Mateen to the FBI, says that programs within the Muslim community such as CAIR-Florida’s are the right approach. But he also said that a government-directed effort toward preventing violence should be “done across the board and not just for Muslims.”

Over the past few years, federal prosecutors have charged 88 people in connection to the Islamic State, and around 250 people are believed to have traveled abroad to join the extremist group in Syria or Iraq. Most have been Muslim, representing a small fraction of the estimated 3.3 million Muslims living in the United States.

The FBI is still investigating what propelled Mateen to massacre the Orlando nightclub patrons. He pledged allegiance to the Islamic State extremist group in a mid-rampage call to 911. But to Hamze, Mateen’s motivations are beside the point. “We’re not responsible for everybody, we’re just responsible for ourselves,” Hamze said. “So we got to do what we can.”

Broad-shouldered and muscular like many of his police peers, Hamze has the rare perspective of an American who navigates two separate worlds. He is a member of a religious minority under fire from politicians like Trump and frequently wary of the FBI. And he is a law enforcement officer, a member of a profession that deals regularly with criminality coming from all types of people, including Muslims.

“I’m in the community. I know the threats. I see the threats,” he said. The program he’s helping direct has produced results; so far, teams have intervened in about seven cases. “I would love to be able to get support from the government. . . . I would like to see them partner [with Muslim communities] and possibly duplicate this program,” he said.

A few days after giving the safety and security lecture at the mosque in Miramar, he was called suddenly by leaders at another mosque to attend to a man showing signs of “mental distress,” Hamze said.

The man, an Egyptian American who had served in the U.S. military and acknowledged he had been diagnosed as bipolar and having post-traumatic stress disorder, was talking about “killing the non-believers.” Hamze spoke with the man and got fellow law enforcement officers involved. The man was committed to a mental health facility.

But, he asked, what if the mosque just had expelled the man, to distance itself from a troublemaker? That’s a concern he always brings up to congregants at his talks.

Beneath the fluorescent lights and whirring ceiling fans of the mosque in Miramar, Hamze asked his audience if anyone knew what happened a few months before the Boston marathon bombing. The room was quiet.

Tamerlan Tsarnev, one of the would-be bombers, interrupted his imam’s sermon about Martin Luther King Jr., accusing the imam of being an unbeliever, he explained. And what did the mosque do? “They kicked him out.”

“People say, ‘Nezar, what are the signs? Can I have a list?’ ” He continued. “There is no list. But you know if something is not right with a member of your family.”