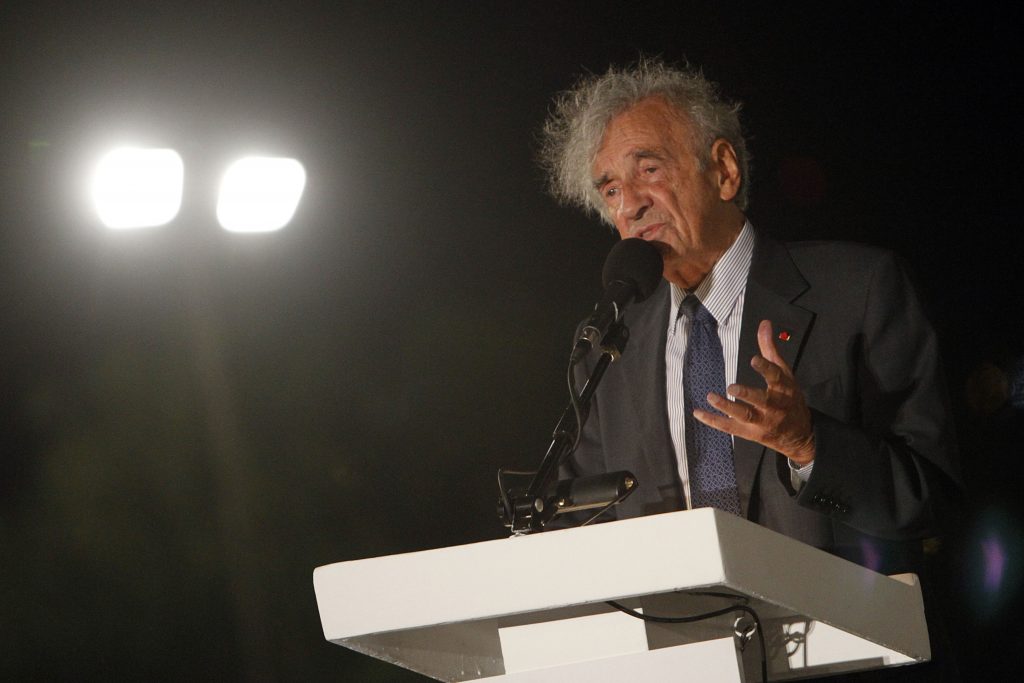 Activist and writer Elie Wiesel, the World War II death-camp survivor who won a Nobel Peace Prize for becoming a lifelong voice on behalf of millions of Holocaust victims, passed away at his home in New York City on Shabbos.

The Romanian-born Wiesel lived by the credo expressed in his landmark story of the Holocaust — “to forget the dead would be akin to killing them a second time.”

Millions learned directly about the Holocaust through Wiesel, beginning in the 1950s, a time when memories of the Nazis’ atrocities were raw and repressed.

Harav Yisrael Meir Lau, former Chief Rabbi of the State of Israel, told Hamodia of his relationship with Wiesel, stretching from their liberation from Buchenwald until their efforts to promote Holocaust remembrance.

He recalled an occasion when Wiesel introduced him at an honorary dinner saying, “both of us were in the akeidah, but neither of our parents returned from Har Hamoriah.”

Renowned Holocaust historian Dr. Michael Berenbaum, who had worked closely with Wiesel, told Hamodia that he had an enormous influence in the public sphere.

“He became the image of the survivor and he understood that…his message was I’m a victim and I suffered, therefore I cannot allow others to suffer.”

President Barack Obama said of Wiesel, “His life, and the power of his example, urges us to be better.”

Wiesel’s wife, Marion, described her husband as “a fighter.”

“He waged countless battles for innocent victims regardless of ethnicity or creed.”

In awarding the Peace Prize in 1986, the Nobel Committee praised Wiesel as a “messenger to mankind” and “one of the guides in an age when violence, repression and racism continue to characterize the world.”

Wiesel did not waver in his campaign never to let the world forget the Holocaust horror. While at the White House in 1985 to receive the Congressional Gold Medal, he even rebuked President Ronald Reagan for planning to lay a wreath at a German cemetery in Bitburg where some of Hitler’s notorious Waffen SS troops were buried.

Wiesel was a hollow-eyed 16-year-old when he emerged from the newly liberated Buchenwald concentration camp in 1945. He had been orphaned by the Nazis and their identification number, A-7713, was tattooed on his arm as a physical manifestation of his horrendous experiences and the nightmares that would haunt him throughout his life.

Wiesel and his family had first been taken by the Nazis from the village of Sighetu Marmatiei in the Transylvania region of Romania to Auschwitz, where his mother and one of his sisters died. Wiesel and his father, Shlomo, ended up in Buchenwald, where Shlomo died.

After the war Wiesel made his way to France, studied at the Sorbonne and by 19 had become a journalist.

In 1985 Wiesel helped break ground in Washington for the U.S. Holocaust Memorial Museum and the following year was awarded the Nobel Peace Prize. In typical fashion, he dedicated the prize to all those who survived the Nazi horror, calling them “an example to humankind how not to succumb to despair.”

Wiesel, who became a U.S. citizen in 1963, was slight in stature but a compelling figure when he spoke. With a chiseled profile, burning eyes and a shock of gray hair, he could silence a crowd by merely standing up.

A few years after winning the peace prize, he established the Elie Wiesel Foundation for Humanity, which, in addition to Israeli and Jewish causes, campaigned for many international humanitarian causes.

He collected scores of awards and honors, including an honorary knighthood in Britain. Obama presented him with the National Humanities Medal in 2009.

Wiesel was memorialized Sunday at a private service in Manhattan, as family and friends gathered at Fifth Avenue Synagogue and praised his endurance and eloquence, and mourned him as one of the last firsthand witnesses to the Nazis’ atrocities.

“This is really the double tragedy of it, not only the loss of someone who was so rare and unusual but the fact that those ranks are thinning out,” said Perry Berkowitz, president of the American Jewish Heritage Organization and a former assistant to Wiesel, before the service. “At the same time anti-Semitism, Holocaust revisionism keeps rising. The fear is that when there are no more survivors left, will the world learn the lesson because those voices will be silenced.”

While Berkowitz and others worry that the Holocaust’s lessons will be forgotten, some note that Wiesel himself worked to make memories endure. Abraham Foxman, former national director of the Anti-Defamation League, said before the service that Wiesel had written dozens of books. Sara Bloomfield, director of the United States Holocaust Memorial Museum in Washington, D.C., credited Wiesel with making organizations like hers possible. She said that Weisel’s book “really put [his] personal memories into our personal consciousness, and it ended up spawning a global remembrance movement that is very vital today,” she told The Associated Press in a telephone interview.

On Sunday, mourners shared personal memories. Ronald Lauder, president of the World Jewish Congress, remembered visiting Auschwitz with Wiesel in the 1980s and was struck that Wiesel’s response was not one of hate, but of “great sadness.”