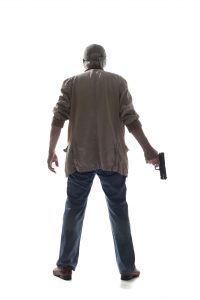 An overwhelming majority of Americans — including those who live in households with guns — support a law that would prohibit suspected terrorists from buying guns, according to a poll released Thursday.

The national poll, conducted by Quinnipiac University, found that 86 percent of respondents think people on the government’s terrorist watch list should not be allowed by purchase guns, compared to 12 who thought they should. The breakdown in households with guns was 83-14 percent.

“American voters clearly are worried about guns,” said Tim Malloy, assistant director of the Quinnipiac University Poll. “They want to make it harder for bad people to get them and believe it can be done without penalizing legitimate gun owners.”

Asked whether it is possible to make new gun laws without interfering with gun rights, 64 percent of respondents said yes, 28 said no, including 59-33 percent among voters in gun households, the poll showed. It also found that every listed party, gender, age, education and racial group agreed with both of those findings.

The poll also found most Americans support background checks for all gun buyers — 93 to 6 percent, including 92 to 8 percent among voters in gun households. Support was 90 percent or higher among every listed group, the poll showed.

Support for universal background checks has been similarly strong — ranging from 88 percent to 93 percent — in eight Quinnipiac University national polls conducted since the Sandy Hook massacre in December 2012, according to a press release.

The poll also found that 54 percent of American voters support stricter gun laws in the U.S., compared to 42 percent who do not, the highest level of support ever for this generic question. Women said they supported stricter gun laws 63 to 33 percent, with men opposed 51 to 45 percent.

The university surveyed 1,610 registered voters nationwide from June 21 to 27, with a margin of error of 2.4 percentage points.