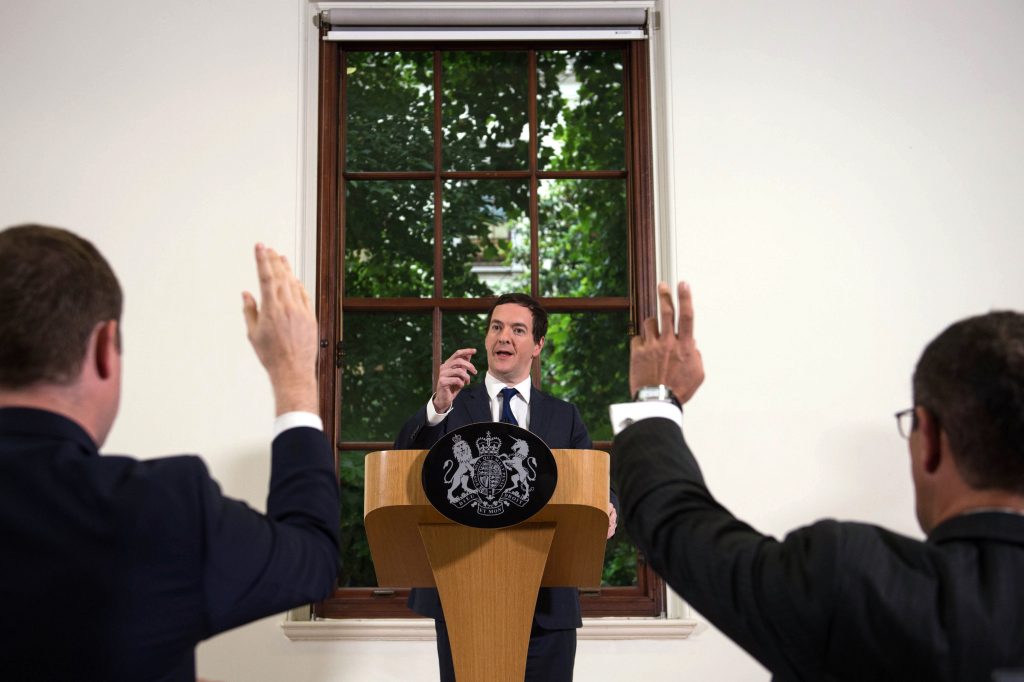 British and European leaders appealed for calm on Monday as concern over the U.K.’s exit from the European Union and its deepening political crisis triggered further gyrations in financial markets and hit confidence in the economy.

In his first public appearance since Thursday’s referendum, U.K. Treasury chief George Osborne stressed that the country’s economy can withstand the shockwaves created by the vote, and that it is in a far better position than it was at the start of the 2008 financial crisis.

“It will not be plain sailing in the days ahead,” he said. “But let me be clear. You should not underestimate our resolve. We were prepared for the unexpected.”

The leaders of European heavyweights Germany, Italy and France will huddle later Monday to discuss a strategy to handle Britain’s exit, trying to hone a common message that negotiations need to get underway quickly on the exit so as not to continue the uncertainty.

German Chancellor Angela Merkel said she understands Britain may need “a certain amount of time to analyze things” before invoking Article 50 of the EU treaty, which will trigger the process for leaving. Prime Minister David Cameron has said he will resign and his successor, to be chosen by the fall, should be the one to navigate that process.

Merkel wouldn’t comment on whether it’s acceptable for London to wait that long, but said that a “long-term suspension” of the question wouldn’t be in either side’s economic interest.

“The notification has to be sent by the British government — I have neither a brake nor an accelerator,” she said.

In the first direct reflection of the uncertainty hitting business confidence, a leading business group said 20 percent of its members plan to move some of their operations outside of the U.K. The Institute of Directors said Monday that a survey of its 1,000 members showed that three out of four believe that Britain’s exit from the EU, known as Brexit, will be bad for business. About a quarter said they would freeze hiring and five percent said they would cut jobs.

The pound hit a new 31-year record low, dropping another 3.5 percent to $1.3199. Stock markets also declined across Europe. Bank shares were particularly hard hit, as they are considered a mirror on the larger economy. Shares in Royal Bank of Scotland, once the world’s largest bank and now mostly state-owned, fell some 20 percent.

Osborne pledged not to impose a new austerity budget — even though he said during the campaign that one would be necessary if voters chose to leave the EU. He said another budget would be the task of Cameron’s successor.

Osborne also said he had been working closely with Bank of England Governor Mark Carney, fellow finance ministers and international organizations over the weekend.

“We are prepared for whatever happens,” he said.

In another move to cushion market reaction, Osborne stressed that only Britain can invoke Article 50. The U.K. “should only do that when there is a clear view about what new arrangement we are seeking with our European neighbors,” he said.

Cameron has chaired an emergency Cabinet meeting Monday. Secretary of State John Kerry is visiting Brussels and London to address the fallout from the vote.

Political turmoil has roiled Britain since the vote as leaders of the government and opposition parties grapple with the question of how precisely the U.K. will separate from the other 27 nations in the bloc.

Opposition leader Jeremy Corbyn is also facing upheaval within his Labour Party after more than 20 advisers quit his inner circle over that past two days.

Corbyn said he will not resign, and has appointed lawmakers loyal to him to fill the vacated posts. He insists he will run in any new leadership contest, and said he has the support of the party’s grassroots.

Many Labour lawmakers accuse Corbyn of running a lukewarm campaign in support of remaining in the EU. They also fear the left-winger cannot win a general election, which could come well before the scheduled date of 2020, as whoever replaces Cameron may call an early election to solidify a mandate before negotiating Britain’s EU exit.

The vote is also causing a political schism in the U.K. overall. Scotland’s First Minister Nicola Sturgeon said she would “consider” whether to advise the Scottish Parliament to use its power to try to prevent Britain from leaving the EU. Some 62 percent of Scots voted to remain in the bloc.

Scottish lawmakers might be able to derail Britain’s departure by withholding “legislative consent,” she said.