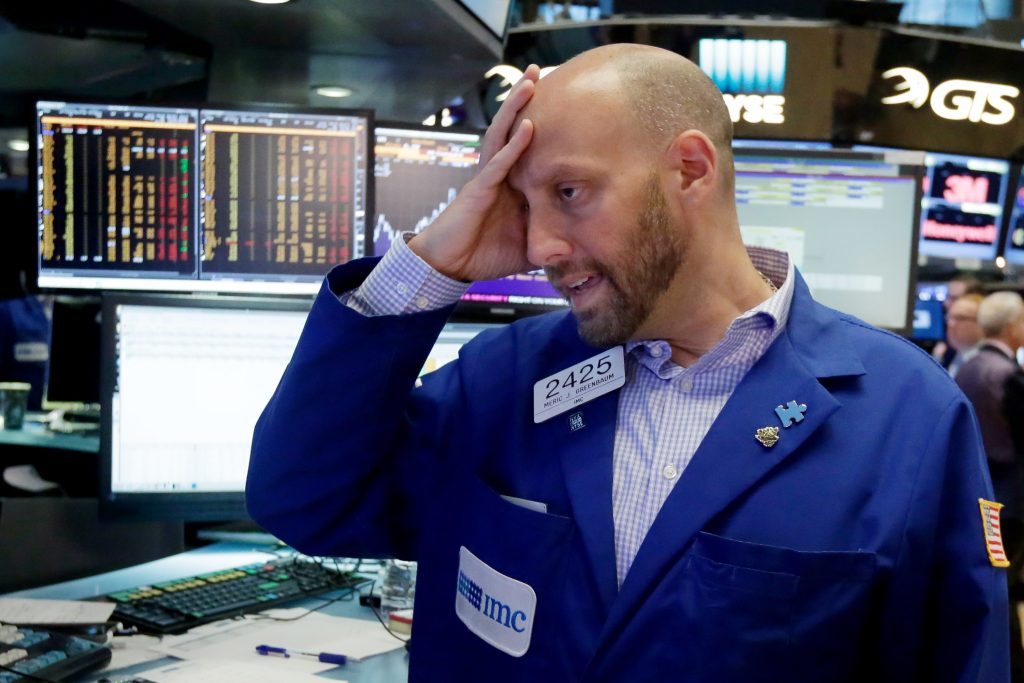 U.S. stocks fell sharply on Friday, with the Dow Jones Industrial Average dropping as much as 538 points, as Britain’s vote to quit the European Union roiled global financial markets.

The S&P 500 index and Dow were on track for their biggest one-day percentage drop since September, while the Nasdaq was headed for its worst day since January. All three indexes were set to post their second weekly decline in a row.

“I would characterize this as an unwinding of some of the gains that we saw over the last few days.”

Global financial markets plunged and sterling sank to its lowest since 1985 after Britons voted by about 52-48 percent to break away from the world’s biggest trading bloc.

Investors worried about the outlook for the world economy sought refuge in the dollar and other traditional safe-harbor assets such as gold and U.S. Treasury bonds, while dumping riskier shares. The yield on the U.S. 10-year T-bond hit its lowest since 2012.

Bank stocks, which had risen strongly this week in anticipation that Britain would stay in the EU, were among the biggest losers. The financial index’s 4.26 percent drop led sector decliners and was set for its worst day in 10 months.

Citigroup was down 8 percent and Morgan Stanley 9.4 percent, while Bank of America, JPMorgan and Goldman Sachs dropped by between 5 and 6 percent.

Nine of the 10 major S&P 500 sectors were lower. Only the utilities sector managed to eke out a gain. Utilities are traditionally seen as a safe investment.

Shares of the biggest U.S. tobacco companies also rose, as investors sought stocks offering high yields. Altria Group , the largest U.S. cigarette maker, was up 2 percent at $67.67 after hitting a record high of $67.97.

The number of S&P futures contracts traded by 9 a.m. ET had already exceeded their daily average for the past year. Trading in S&P 500 and Nasdaq futures was halted briefly overnight after they fell more than 5 percent, triggering limit thresholds.

U.S. short-term interest-rate futures rose amid speculation the Federal Reserve could cut interest rates to help shield the economy from any global fallout.

Investors have been waiting for the Fed to raise borrowing costs as the economy improves.

The Federal Reserve, which had earlier said a Brexit could have “significant repercussions” on the economic outlook, sought to calm markets on Friday by saying it was ready to provide dollar liquidity.

Amid the turmoil, U.K. Prime Minister David Cameron said he would step down by October.

Oil prices, which are sensitive to changes in the economic outlook, dropped about 4.8 percent, the biggest fall since early February. Exxon and Chevron were down about 2 percent.

Among gold miners, Barrick was up 5.3 percent and Newmont Mining was up 4.5 percent.

Apple, which got more than a fifth of its revenue from Europe last quarter, was down 2.4 percent.