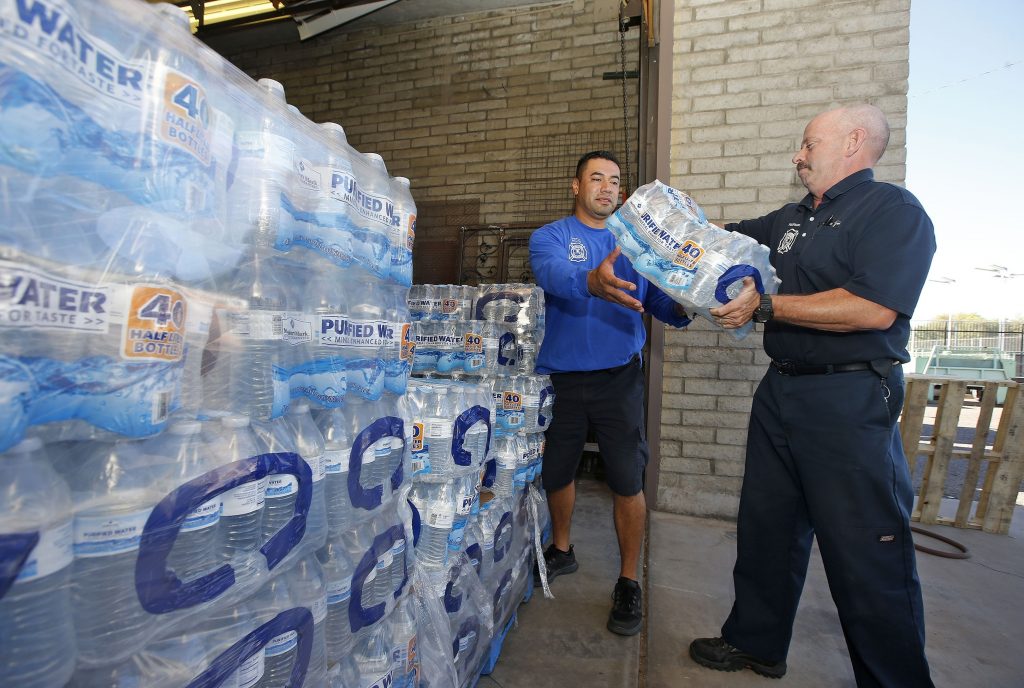 In 120 degree temperatures, some airplanes might not take off. Power grids strain as the outside air keeps transmission lines from cooling. And for desert dwellers, a cold bottle of water and some shade can mean the difference between life and death.

Parts of the U.S. Southwest, long accustomed to triple-digit temperatures, are preparing for a heat wave.

In Phoenix, the high for Saturday was 111. But meteorologists believe the next two days could be record-breaking. Officials are warning residents the mercury may rise to 120 on Sunday and Monday, approaching the city’s record of 122.

“If we are going to 115 or 120, people need to realize they are really in a life-threatening situation if they don’t wet themselves down and drink water,” said Kevin Kalkbrenner, Phoenix’s director of homeland security and emergency management.

Excessive heat contributed to 84 deaths in the state last year, officials said in Maricopa County, the state’s largest. Officials already confirmed this year’s first heat-related death — an elderly woman who died from heat exposure in her backyard in early June.

Dr. Cara Christ, director of the Arizona Department of Health Services, is warning residents to watch for signs of heat illness: thirst, red skin, cramping, exhaustion and a lack of sweat. The agency is telling local officials to prepare for an influx of heat-related illnesses.

The Phoenix parks department is posting extra rangers at hiking trails warning visitors of the dangers and asking them to be off the trails by noon.

Airlines will be monitoring temperatures as excessive heat can throw off performance calculations preventing planes from taking off, said Polly Tracey, spokeswoman for American Airlines.

Tracey said they may have to have to delay flights until the heat lets up, but officials will have to wait and see before making any decisions.

Arizona’s hottest day on record was in 1990 when temperatures hit 122 degrees, said Nancy Selover, state climatologist. Airlines grounded all the flights out of Phoenix Sky Harbor International Airport, she said.

Selover said the heat impacts everything from the expansion of the metal tracks along the Valley Metro Rail — though they’re designed to handle it — to cotton crops thirsting for more water, to increasing evaporation on the state’s lakes and reservoirs.

But the quick jump from moderate to scorching temperatures may have the biggest impact on people, she said.

At Redeemed Outreach Center in downtown Phoenix, volunteers pass out cool water for anyone who walks by, many of whom are homeless.

“We’re a church so it’s what God called us to do,” said pastor Jerry Savocchio, whose church is one of 50 cooling stations in Maricopa County.

Nearby, Arizona’s largest homeless shelter is working to amass 300,000 water bottles to pass out to the homeless over the summer, said J. David Smith, spokesman for Central Arizona Shelter Services.

“Our clients are out most of the day, if they are not staying with us regularly they can be out 24 hours a day,” said Smith.