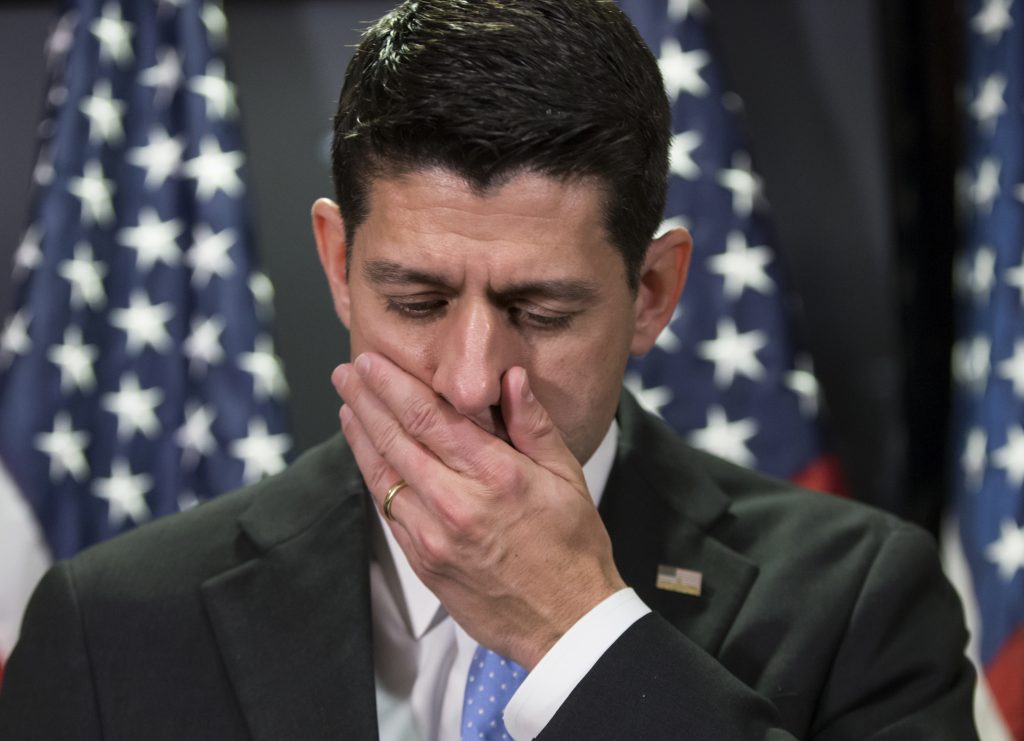 Speaker Paul D. Ryan’s moment of silence for the Orlando massacre victims led to an uproar in the House chamber on Monday, as Democrats are seeking tougher gun-control laws in the aftermath of the terror attack that killed 49 and wounded dozens more.

First, Connecticut Democrat Jim Himes walked off the floor when Ryan announced the moment of silence. Himes was joined by fellow Democrats John Larson and Joe Courtney of Connecticut, and Peter Welch of Vermont.

Newtown, Connecticut, was the site of the 2012 Sandy Hook Elementary School mass shooting that left 20 children and six adults dead. Himes and other members of the Connecticut delegation have been outspoken on gun-control measures ever since.

Following Ryan’s moment of silence, an unidentified woman yelled, “Now do something.” Ryan tried to get back to the day’s business. But then, South Carolina Democrat James E. Clyburn yelled, “Mr. Speaker!” in an attempt to be recognized.

Other Democrats continued to yell, “No leadership” and “Where’s the bill?”

They were referring to a bill to ban people who are on the Terrorist Screening Center’s no-fly list from being able to purchase a gun, but the point was to push for legislative action generally, Rep. Karen Bass (D-Calif.) told reporters.

Ryan tried to talk over the shouting, paused, recognized Clyburn, and then almost immediately cut him off to move to the next vote.

By this time, Himes had returned to the chamber.

New York Rep. Joseph Crowley then started chanting, “Where’s the bill?” And several other Democrats joined him. They eventually stopped, took a vote related to a cyber-security bill, and began to clear out.

Crowley stayed long enough to yell “Where’s the bill?” one more time before leaving the floor.

Apparently anticipating exactly what Ryan did on Monday, Himes had tweeted on Sunday — after the Orlando incident — his intention to avoid another moment of silence on the House floor. Democrats also have been critical of previous moments of silence following mass shootings.

He elaborated on his position before Ryan’s moment of silence.

“Silence. That is how the leadership of the most powerful country in the world will respond to this week’s massacre of its citizens,” Himes said.

Then he read the names of a few of the Orlando victims.

Clyburn said he asked Himes and others not to walk out on the moment of silence. He said some members adhered to his request.

“There were some who did not want to participate and we said, ‘No,’ … We respect and pay our respects to those who lost their lives and families,” House Minority Leader Nancy Pelosi (D-Calif.) told reporters.

Pelosi and Clyburn said they agree that more needs to be done though.

“Members have just had enough of having one moment — a moment of silence on the floor — and then take no action,” Pelosi said.

She referenced the no-fly list bill as one that’s had the support of the American public since the 1980s. Asked about similar legislation the Bush administration proposed when she was speaker, Pelosi said, “I’m not familiar with what you’re talking about but the fact is we’re living in the here and now.”

Clyburn cited the no-fly list bill, as well as two other bills he had planned to ask the speaker when the House would take up. One would ban persons convicted of a hate crime from being able to purchase a gun and another would close the “Charleston loophole” and require background checks to be fully completed before a gun can be sold.

“What we have is a loophole in that law that says if the background check is not completed within three days, you can sell the person a gun anyway, and that’s what happened with Dylann Roof,” Clyburn said, referring to the alleged shooter who killed nine people at a Charleston church last year.

Clyburn said the three bills Democrats are asking the House to vote are “no brainers” and shouldn’t continue to be ignored.

“For us to be silenced when these things happen rather than fashioning some legislative response to me is just not good,” he said.

Clyburn offered one idea. “In Orlando, this gentleman had been interviewed by the FBI several times,” he said of the shooter, Omar Mateen, who was killed by police.

“It seems to me that that’s cause for denying him a gun. Yet he bought these two guns, as I have heard, within a few days of committing this atrocity. So it seems to me, that once you get on that list … the FBI list — because they’ve talked to you more than once — that to me ought to trigger somebody saying, ‘Hey, this guy should not be buying a gun.’”