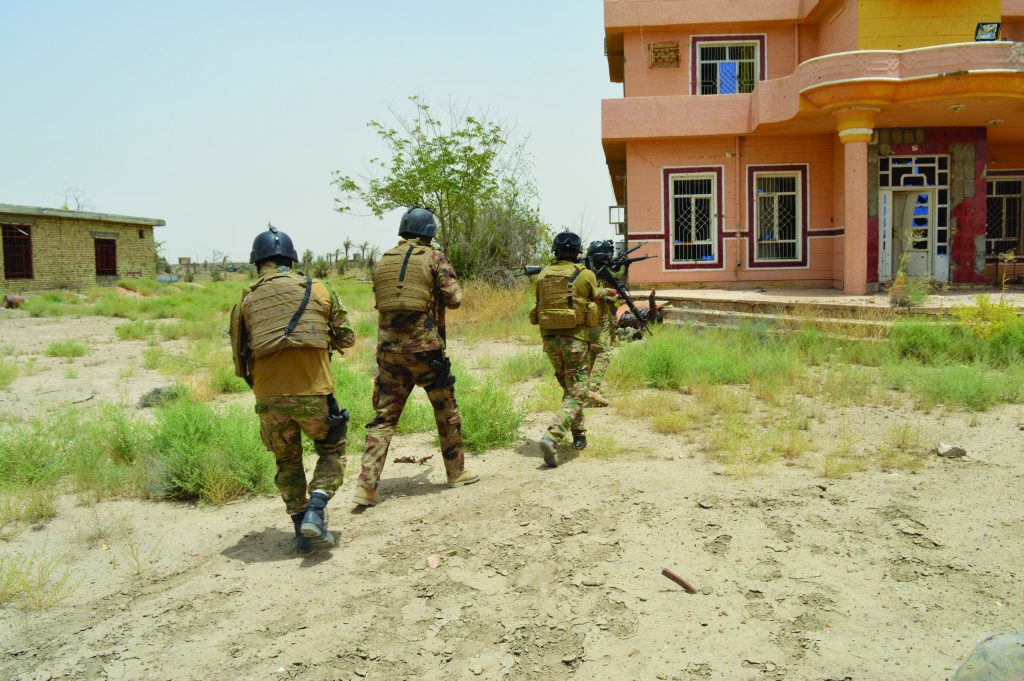 After securing the southern edge of Islamic State-held Fallujah, seven battalions of Iraqi special forces units have been unable to advance for two days — a delay that commanders say isn’t due to counterattacks or difficult terrain, but rather to disagreements about battlefield strategy among the disparate Iraqi forces fighting the Islamic State group.

Unlike previous anti-IS operations, the fight for Fallujah involves an array of Iraqi security forces. A battle plan that was initially cast as an example of how those fighters can work together has instead revealed just how fractured Iraq’s security forces are.

“I wouldn’t say the different forces in the Fallujah operation are cooperating: They’ve just divided up the battlefield,” said Patrick Martin, an Iraq analyst with the Institute for the Study of War, a think tank based in Washington.

Since IS overran Mosul in the summer of 2014, two groups have come to dominate the fight against the terrorist group in Iraq: The country’s elite counterterrorism special forces and the government-sanctioned, largely Shiite militias known as the Popular Mobilization Forces.

Once highly centralized under former Prime Minister Nouri al-Maliki, Iraq’s security forces have splintered under the weight of the political and security crises that were unleashed by the IS blitz across Iraq two years ago.

Iraq’s military largely disintegrated in the face of that assault, and in the days that followed, a number of largely Shiite militia groups took up arms against IS and stopped their advance north of Baghdad.

While rebuilding Iraq’s military has been a slow process with mixed results, Iraq’s Shiite militias have quickly grown in strength. More powerful than the country’s own military, the militia fighters were formally incorporated into the Iraqi government force under command of the prime minister. But most maintain a large degree of autonomy under leaders with greater political and military clout than the increasingly embattled prime minister, Haider al-Abadi.

Iraq’s special forces units were the one branch of Iraq’s military that was largely untouched by the 2014 collapse. The elite troops, who operate separately from the Ministry of Defense and are products of a decade-long intense U.S. training program, quickly took the lead in a number of key battles against IS across Iraq.

In the battle for Fallujah, both forces are participating in the operation to retake the highly symbolic city located about 40 miles west of Baghdad.

The counterterrorism troops have been tasked with entering the city itself and the Popular Mobilization Forces have so far been restricted to clearing and securing Fallujah’s outskirts. Both groups maintain their own command and control structure, creating a more time-consuming planning process than in recent anti-IS operations in Anbar province where the counterterrorism forces largely worked alone.

Maj. Ahmed Na’im with the Anbar police force says while his men and the Iraqi federal police are fighting the same enemy in the same city, they never coordinate operations or share intelligence.

“They have their own plans and take their orders from their own people,” he said.

Two days after taking up positions on the outskirts of Fallujah, one such dispute brought operations to a halt on Tuesday.

The disagreement involved who should participate in the operation to clear the city of IS fighters before an advance into Fallujah could begin, with some Shiite militiamen insisting they be part of that mission, said a senior Iraqi security official who spoke on condition of anonymity because he was not authorized to brief the media.

The Popular Mobilization Forces denied that, saying their fighters were ready to enter Fallujah if given the order but were standing down for now, said Hayder Mayahi, an official with the group’s media office overseeing the Fallujah operation.

The spokesman for the U.S.-led coalition downplayed any suggestion that the operation had stalled.

“Iraqi forces are positioning to move forward,” said Col. Christopher Garver. “These are things that happen on the battlefield,” he said, referring to the dispute over how the battle should progress.

Still, just south of Fallujah’s Shuhada neighborhood, the only evidence of an ongoing operation Tuesday was the occasional round of Iraqi artillery fired into the city. By noon not a single coalition airstrike had been called in. A week earlier, coalition planes were averaging 25 to 30 strikes per day.

Meanwhile, aid groups were increasingly expressing concern for the estimated 50,000 civilians trapped inside the city. In the months prior to the start of the operation, a siege around Fallujah led to reports of malnutrition as the price of food skyrocketed.

Since the start of the assault to retake the city two weeks ago, conditions for civilians in Fallujah have swiftly deteriorated. Fallujah residents speaking to the Associated Press by phone said during the first few days IS fighters handed out water and simple rations to civilians inside the city, but since then no further supplies have made it in.

“Another humanitarian tragedy is unfolding in Fallujah and the worst is yet to come,” said Bruno Geddo, the representative for the United Nation’s refugee agency in Iraq.

Meanwhile, the U.N. human rights chief said there were “credible reports” that Iraqis fleeing Fallujah were facing physical abuse as they escaped the city held by Islamic State terrorists.

In a statement Tuesday from his office in Geneva, Zeid Ra’ad al-Hussein cited witness accounts that armed groups backing Iraqi security forces have detained some men and teenage boys leaving Fallujah with force that at times “degenerates” into abuse.

Zeid acknowledged that Iraqi forces have a “legitimate interest in vetting individuals fleeing ISIL-controlled areas” to make sure they don’t pose a security risk, but said those fleeing must be presumed to be civilians, barring “clear and cogent evidence to the contrary.”