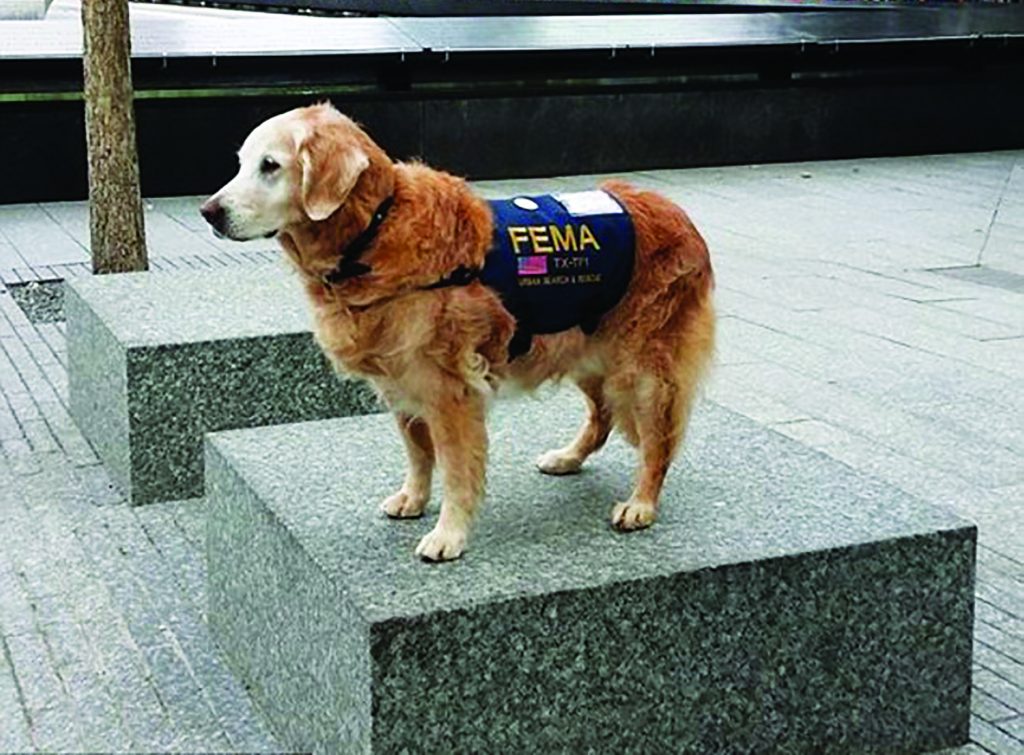 Before Bretagne the golden retriever died, she received one final salute — for her hard work, for her gentle ways, for her service in that devastating place 15 years ago.

Panting at the end of a thick leash, the elderly dog was gently lifted from a truck and placed on the veterinary office sidewalk outside. Then she hobbled slowing toward the building, passing more than a dozen men and women dressed in blue, their hands raised to their foreheads in a salute.

After it was done, they carried away her limp body, draped in an American flag. It was the end of the 16-year-old dog’s lifetime of service and, in some ways, the closing of a devastating chapter in the nation’s history. Bretagne was the oldest known surviving dog that scoured Ground Zero in 2001 during search and rescue efforts after the Twin Towers fell in New York City, said the Cy-Fair Volunteer Fire Department, where the golden retriever was a member of the crew. Old age led Bretagne’s longtime handler, Denise Corliss, to make the difficult decision to euthanize the dog Monday.

The dog earned national fame last year when Bark Box, a dog treat delivery service, invited Bretagne and Corliss to New York City for a 16th birthday party. She was wined and dined at 1 Hotel Central Park and thrown a birthday party.

“She represents the working dogs, in the disaster box in particular,” Corliss said in a video documenting their trip. “And you know, they are all deserving of a day like today.”

Corliss and Bretagne became a team in 1999, when she brought the eight-week-old puppy home in hopes that she, as a civilian, could train the dog to be a disaster relief duo.

In 2000, she learned they’d qualified to be official members of Texas Task Force 1, an urban search-and-rescue team.

That same year, Bretagne became a full member of the Cy-Fair Volunteer Fire Department crew and the founding canine member of its K9 Search and Rescue Team, the department said. A certified FEMA disaster search dog, the golden retriever responded to multiple natural disasters including Hurricanes Katrina and Rita, and after the terror attacks on September 11, 2001, Bretagne traveled to New York City with Corliss to look for survivors amidst the rubble. At that time, she was just two years old.

“We were there to try to find survivors, and when our task force arrived in Ground Zero, I just couldn’t believe the magnitude of it,” Corliss said. “Towards the end of our mission, it changed from a search mission to a recovery mission. I was just so grateful to have a K9 partner that helped me get through it.”

The duo worked for almost two weeks on 12-hour shifts but never found any survivors. As they continued searching, Bretagne became a therapy dog, not to just Corliss, but other volunteers. Once, Bretagne ignored Corliss’s commands to “sit” and “stay,” instead trotting up to a somber firefighter on the ground. “She went right to that firefighter and laid down next to him and put her head on his lap.”

In her final years, Bretagne “volunteered” at a local elementary school, listening to first-graders learn to read and comforting children with autism.

Corliss and Bretagne returned to the 9/11 memorial in 2014. They walked the memorial, side by side.

The National September 11 Memorial and Museum has dedicated a cobblestone in the name of Bretagne.