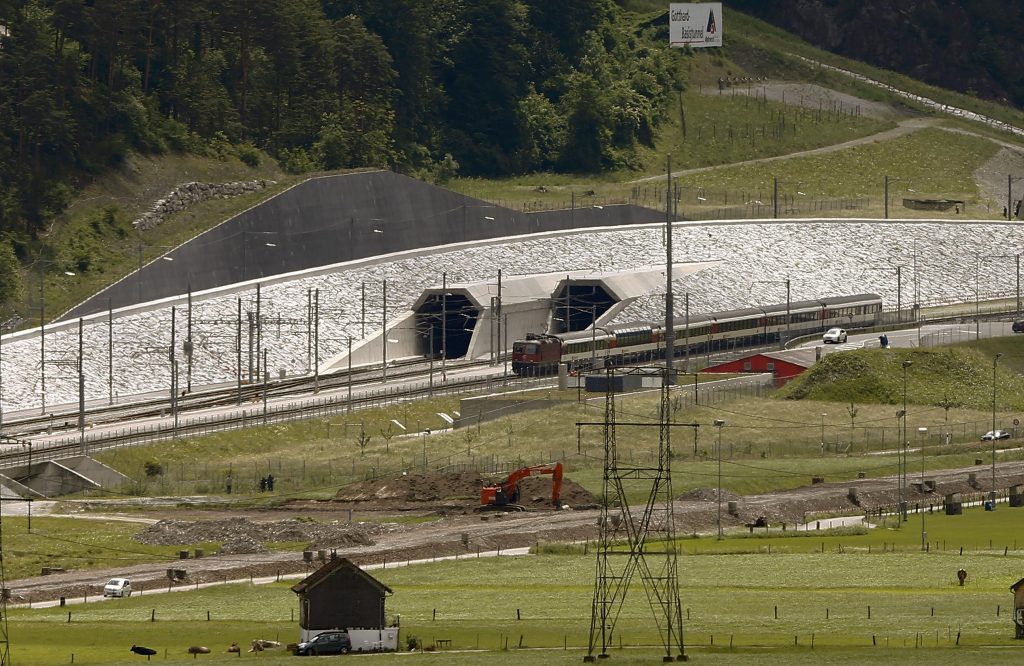 Switzerland is opening the world’s longest and deepest rail tunnel through the heart of the Alps on Wednesday, in an engineering marvel that stands as a symbol of European unity at a time of increasing fragmentation.

The 35.5 mile-long Gotthard Base Tunnel, 17 years under construction and designed to last a century, is part of a 23 billion Swiss franc (just over $23 billion dollar) infrastructure project to speed passengers and cargo by rail under the mountain chain that divides Europe’s north and south.

Typically Swiss, the project that Peter Fueglistaler, Director of the Swiss Federal Office of Transport called “a masterpiece of timing, cost and policy” came in on schedule and on budget.

High-speed trains will whisk passengers in 17 minutes through a passage that once took days to traverse (until the first Alpine rail tunnel opened in 1882). Once final testing ends later this year, about 260 freight trains and 65 passenger trains will traverse the two-tube tunnel each day.

The Swiss, who are generally railroad fanatics, are throwing a party to mark the event that will draw the leaders of all its neighboring countries in a show of European solidarity.

“It is just part of the Swiss identity,” Fueglistaler said of the Swiss fondness for major engineering feats. “For us, conquering the Alps is like the Dutch exploring the oceans.”

Engineers had to dig and blast through 73 kinds of rock as hard as granite and as soft as sugar. Nine workers died.

The tunnel, which runs alongside Europe’s main rail line and connects the ports of Rotterdam in the north to Genoa in the south, snakes through the mountains as much as 1.4 miles below daylight and through rock as hot as 114.8°F.

The rail route currently goes over the pass in a series of loops and tunnels. This new flat route means even heavy trains will need only one locomotive rather than two or three.

Swiss voters – despite opposition at times from the government and parliament – supported the gargantuan rail project in a series of binding referendums during the 1990s.

Fittingly, the first ones to travel the tunnel at the official opening will be 500 lucky winners and their guests, chosen from among the 130,000 who entered a ticket lottery for the inaugural trip.

The overall project includes the Loetschberg rail tunnel that has already opened, the Cereti tunnel which is still under construction, and renovations to make rail tunnels at least 4 meters high at the corners in order to accommodate huge freight containers. Work is due to finish in 2020.

The mammoth rail venture is being financed by value-added taxes and fuel taxes, road charges on heavy vehicles and state loans that are due to be repaid within a decade.