By Francois Murphy and Michael Shields

Austria could elect the European Union’s first far-right head of state on Sunday, with support for Freedom Party candidate Norbert Hofer buoyed by a migration crisis that has heightened fears about employment and security.

Opinion polls suggest the presidential race between Hofer and former Greens leader Alexander van der Bellen will be close-run. A far-right victory would resonate throughout the 28-member bloc where migration driven by conflict in the Middle East and Africa has become a major political issue.

Austria took in 90,000 asylum seekers last year, more than 1 percent of its population, many of them shortly after it and neighboring Germany threw open their borders last autumn to a wave of migrants including refugees from Syria’s civil war.

The government has since clamped down on immigration and asylum, but that about-face only fueled support for the far right, which was already capitalizing on widespread frustration with the country’s two traditional parties of government.

Sunday’s run-off election comes four weeks after Hofer unexpectedly won the first round with 35 percent of the vote.

The president traditionally plays a largely ceremonial role but swears in the chancellor, can dismiss the cabinet and is commander-in-chief of the military.

Whoever wins, the election is likely to be a new high-water mark for Europe’s resurgent far right, all the more significant for being in a relatively prosperous country with comparatively low, albeit rising, unemployment.

It will also indicate whether mainstream parties were right not to close ranks and call for an anti-Freedom Party (FPO) vote, with many feeling it would only have bolstered the FPO’s argument that it is taking on a hostile political establishment. 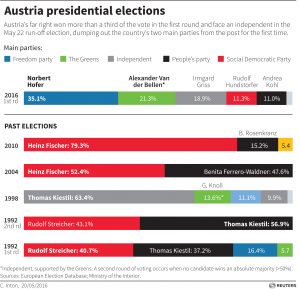 The first-round vote was a heavy blow to the ruling Social Democrats (SPO) and their coalition partner, the People’s Party — for the first time since Austria’s president became directly elected in 1951, neither party will provide the head of state.

The result also set off a party revolt within the SPO that led to rail boss Christian Kern becoming chancellor, replacing Werner Faymann. Whether the more popular Kern’s arrival will affect the outcome on Sunday is unclear.

Van der Bellen, who came second in the first round on 21 percent, has accused his opponent of having an authoritarian view of the president’s powers, saying Hofer wants to dismiss the government so snap parliamentary elections can be held.

The next parliamentary election is due in 2018, but with the euroskeptic FPO running first in opinion polls on more than 30 percent, it would be well placed to win a snap vote.

Hofer has said he would, as president, already have dismissed the government over its handling of the migration crisis, but would not do so immediately if he became head of state.

Tabloid reports of immigrants availing themselves of Austria’s generous benefits, as well as of crimes in which immigrants have been suspects, have played into the FPO’s hands.

A Gallup poll for the Oesterreich newspaper last weekend found Hofer ahead by a 53-47 margin based on 600 people surveyed. But it was a dead heat among those who said they were certain to vote, a key factor after nearly a third of eligible voters failed to cast ballots in the first round.